Share All sharing options for: Why the Israel-Palestine conflict is spiraling into the worst violence in years

On Monday night, between 5 and 12 people were killed in Israeli airstrikes in the Hamas-controlled Gaza Strip, from which Hamas has been firing rockets into Israel. Israeli's cabinet authorized the military to call up 40,000 reservists, and Israeli Defense Minister Moshe Ya'alon said that "we are preparing for a battle against Hamas which will not end within a few days." Tensions between Israel and the Palestinian militant group were already at a high point, but now there's a real chance of the first full-blown war between the two sides since 2012. Meanwhile, Palestinian protests in the West Bank are growing, and a number have ended in violent clashes with Israeli security forces.

Why is this happening? It all started with the killings of four young boys, three Israelis in the first incident and one Palestinian in the second. The fallout of these murders has devolved into a crisis that's challenging some of the most important features of Israeli and Palestinian society.

There's a real possibility of a third intifada

About a month ago, three teenage Israeli students — Eyal Yifrah, Gilad Shaar, and Naftali Frenkel — disappeared in the West Bank, where they were studying at a yeshiva. Israel conducted a massive manhunt for them in the West Bank, on the basis of intelligence that they were kidnapped by Palestinian militants. Thousands of Israeli soldiers swept the Palestinian territory, arresting hundreds of Palestinians and shutting down Palestinian movement in wide areas.

The boys were found, dead in apparent gunshot executions, last Monday. The leading suspects are Hamas members, and Israeli Prime Minister Benjamin Netanyahu insists that the entire group bears responsibility, though Hamas itself denies any role in planning or carrying out the killing. Israel responded with a limited bombing campaign in Gaza. Palestinian militant groups (though, notably, not Hamas) in Gaza fired rockets into Israel.

That could have potentially been the end of the fighting — were it not for the murder of Muhammed Abu Khdeir. Israeli authorities found the 16 year old Palestinian boy's body last Wednesday, apparently burned to death. Police arrested 6 Israelis over the weekend for Khdeir's murder, and told reporters that the killing was "nationalistic." In simpler terms, that it was a revenge killings by Jewish extremists for the murders of the three Israeli boys. Buzzfeed's Sheera Frenkel reports that the alleged perpetrators were part of a racist Israeli soccer gang, La Familia. It followed a string of violence against Palestinians by settlers and other Israelis, within a climate of anti-Palestinian sentiment and some inflammatory statements by right-wing Israeli politicians.

A few days later, Tariq Abu Khdeir, Muhammed's 15-year-old Palestinian-American cousin, was brutally beaten while detained by Israeli police after a Palestinian demonstration in East Jerusalem. Footage of his assault made it to YouTube.

the Palestinian unity deal may be falling apart

Palestinians are furious about the Khdeir boys, about the bombings in Gaza, and about the clamp-down on the West Bank during the search for the murdered Israelis. There were riots in Jerusalem, the West Bank, and some Israeli Arab towns. On Monday, Hamas fired rockets into Israel, for which it claimed responsibility for the first time since 2012. Then, Monday night, Israel launched more strikes in Gaza, as part of what Netanyahu said was an effort to make Hamas "pay a heavy price." The conflict is continuing to escalate with no clear end in sight.

So that's how we got here. Here are three major things that might happen next.

First, there's a real possibility of a third intifada, or popular Palestinian uprising against Israel. A number of Palestinian militant groups are calling for a violent uprising, and one reporter on the ground in East Jerusalem called the clash between rioting Palestinians and Israeli police the worst "since the second Intifada," which claimed thousands of lives in the early 2000s. If the rioting, rocket fire, and Israeli air strikes beget more violence from both sides, an all-out war between Israel, Hamas, and other Palestinian groups is a not implausible possibility. 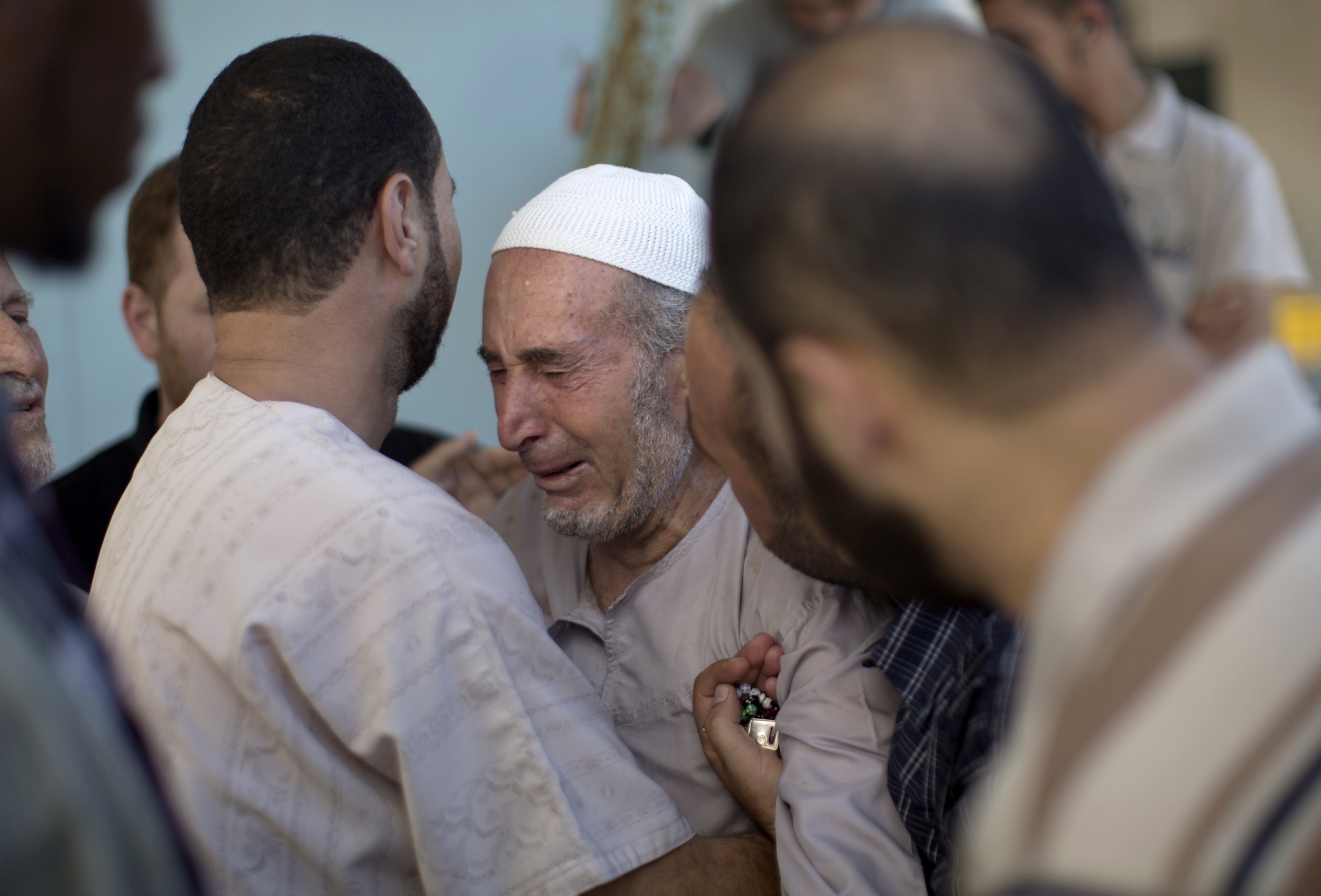 The father of killed Hamas militant Rashad Yassin, 28, grieves at the morgue of the al-Aqsa hospital in Gaza. Mahmud Hams/AFP/Getty Images

Second, the Palestinian unity deal may be falling apart. Since 2006, the Palestinian leadership has been split between Hamas in Gaza and Fatah, a more moderate group, which controls the West Bank. In April, Hamas and Fatah agreed to join a interim government and hold Palestinian elections in both territories. However, this crisis is sharply dividing these two groups. While Hamas has openly fought with Israel, Fatah has stayed out of the fighting and tried to urge calm. The two groups have been furious with each other throughout the current crisis, are split further by Fatah's reliance on Israel in the West Bank, and are behaving like separate governments. The longer this fighting goes on, the more likely it is that the split becomes formal.

Finally, the treatment of the Khdeir boys has sparked a public debate inside Israel about the direction that Israeli society is being taken by the continued occupation of the Palestinian territories. Most Israelis reacted with shock at Khdeir's murder, which the Israeli government formally condemned. The Israeli left, which has been politically weak for some time, has argued that these murders are a natural outgrowth of Israel's military occupation of the West Bank and even its self-definition as a Jewish state. But while this episode has brought renewed attention to the consequences of the Israeli occupation, so too has it brought widespread Israeli outrage over the murders of the yeshiva students; anger and polarization are rising on both sides, and will likely continue to rise along with the violence.