Less than 1 percent of food stamps go to ineligible people

Share All sharing options for: Less than 1 percent of food stamps go to ineligible people

Attacks on food stamps for being full of waste and fraud are fairly commonplace. "Food Stamp Program Riddled with Waste and Fraud," one Heartland Institute post declared. "This program is known for waste, fraud and abuse," according to Rep. Vicky Hartzler (R-MO).

The biggest problem with this critique is that it's completely factually incorrect. Food stamp "fraud" (which mainly means trading food stamps for cash, a totally reasonable activity that in a just world would be 100 percent legal without any fees attached to it) is very rare, with a fraud rate of only 1 percent.

As for waste, the Center for Budget and Policy Priorities' Dottie Rosenbaum has a new report explaining that the rate of overpayment and underpayment (that is, the payment of either too much or too little in benefits to participants, including any payments to ineligible people) have both been falling considerably in recent years: 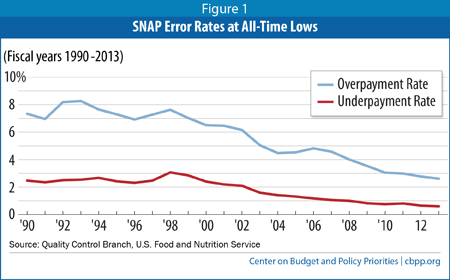 The report credits the 2002 Farm Bill with helping effect the decline. Before that law, every state that was below the national average for over/underpayment got sanctioned, even if they were improving. That created "pressure on states to adopt policies that reduce errors but at the expense of impeding access to the program among eligible households."

The 2002 Farm Bill changed the system to a warning to states whose errors rates were more than double the national average, combined with a monetary sanction the following year if they did not fall below that. It also included bonuses not just for states that reduced error rates, but also for ones that reached more eligible people and processed applications in a more timely manner. 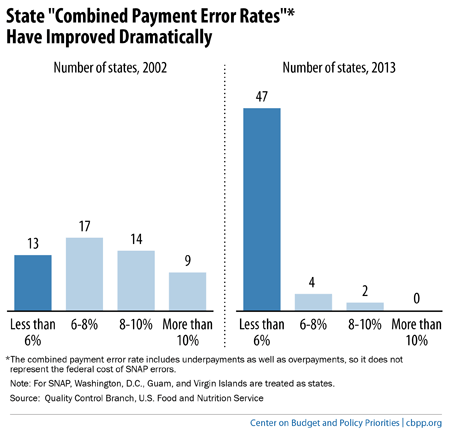 The result was that error rates fell (see the above chart, via here) but participation rates actually increased, from 54 percent in 2002 to 79 percent in 2011. That meant millions of families who were owed food stamps finally got them, rectifying another, much more significant kind of food stamp error than normal over/underpayment.

Meanwhile, even though 2.61 percent of food stamp dollars were overpayments, most of those were excessive payments to families that were eligible for food stamps to begin with (and frankly, more generous assistance to families that are genuinely in need doesn't strike me as a problem). "More than 99 percent of SNAP benefits are issued to eligible households," Rosenbaum notes. And these errors were generally the result of innocent mistakes:

The overwhelming majority of SNAP errors appear to result from honest mistakes by recipients, eligibility workers, data entry clerks, or computer programmers. States report that almost two-thirds of all overpayments and 90 percent of underpayments in recent years were their fault; most others resulted from innocent errors by households.

That are totally valid reasons to criticize food stamps. It'd be a lot better as a straightforward cash transfer program whose recipients could spend it on whatever they liked, for example. But the idea that it's unusually wasteful just isn't borne out by the facts. As Rosenbaum observes, 16.9 percent of legally due taxes were unpaid in 2006, the most recent year for which we have data. Given 2.61 percent overpayment and 0.6 underpayment rates, food stamp is losing only about 2 percent of its money to errors; next to the 16.9 percent loss to tax revenue, that feels fairly trivial.