Share All sharing options for: Two charts that prove the Afghan drug war is a total failure

Afghanistan produces 92 percent of the world's opium, fueling both the global heroin trade and the Taliban insurgency. Since 2001, and especially from 2009 to 2013, NATO has made cutting down on this illicit market a major part of its strategy in Afghanistan. The United States alone has spent over seven billion dollars on counter-narcotics efforts since 2002.

For all that effort, only one percent of opium produced in Afghanistan has been seized. And there's been no meaningful dent in production, which is actually higher than it was before 2001. America's drug war in Afghanistan is a total failure.

Opium-related activities make up half of the country's GDP

The Special Inspector General for Afghanistan (SIGAR), the US government group tasked with auditing the war effort there, put together UN data on drug interdiction in Afghanistan. It found that, from 2008 to 2013, the US only seized 354,712 kilograms of opium — out of the total 33,200,000 kilograms produced. When you chart that, the bars representing opium seized barely show up compared to the total produced: 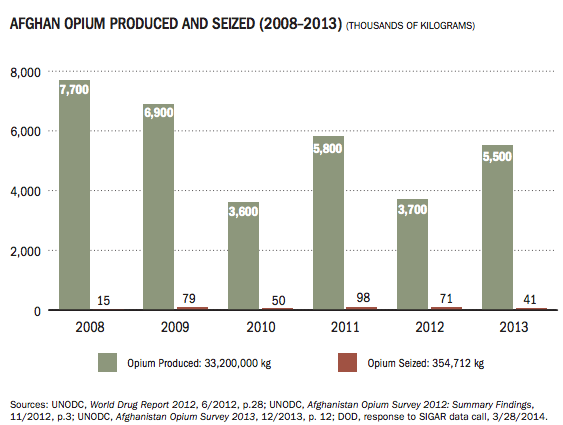 What that means is the United States, its NATO allies, and the Afghan government have had basically zero success seizing opium after it's been produced.

Now, interdicting drugs isn't the only plank of the anti-drug strategy. NATO is also trying to eradicate opium production; in other words, stop it from being produced in the first place. That means convincing Afghan farmers not to grow poppy (the plant that produces opium), destroying poppy fields, and the like. 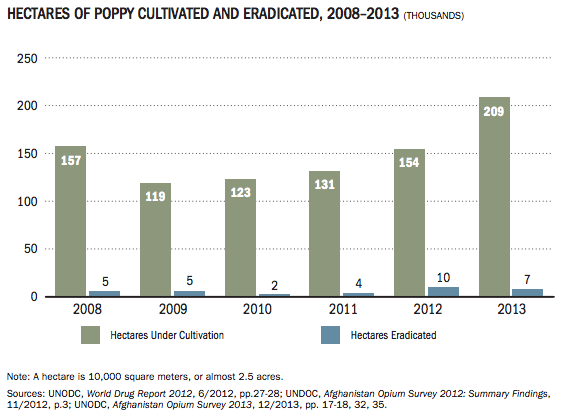 Now, it's true that the total amount of opium produced in Afghanistan has declined from its 2008 peak. But, according to the UN, that's because of "plant diseases and bad weather" — not the war. There's more land devoted to poppy cultivation, but it's less productive because of natural conditions. Drug eradication doesn't appear to have much to do with it.

Why has the campaign against opium failed so epically? There are plenty of reasons, including widespread Afghan government corruption and the fact that 95 percent of poppy cultivation happens in the country's insecure, Taliban-filled southwestern provinces.

But the most important one is the most basic — Afghanistan runs on opium. Opium-related activities make up half of the country's GDP; the legal economy depends on its proceeds to function. As Fabrice Pothier, the director of the Carnegie Endowment's European branch and an expert of the Afghan drug trade, explains in an absolutely staggering passage, opium is more than 50 times as important to Afghanistan as cocaine is to Colombia:

The export value of the crop is equivalent to half of the Afghan GDP, or around US$ 3bn. As a comparison, the export value of the Colombian cocaine is equivalent to less than 1% of the GDP of Colombia, and yet represents a serious security and economic challenge to stability in Latin America. These figures give a sense of the sheer scale of the illicit drugs problem in Afghanistan, one of the world's poorest countries. Not only is opium a huge illicit economy, but it also sustains the licit ones, fuelling a booming building sector and providing the capital for the informal rural credit system.

Despite earning comparatively more than with licit crops, the 3 million rural Afghans who depend directly on poppy cultivation are also kept in dire poverty, chained to a poppy credit system. The dependency is such that, according to World Bank experts, too sudden a reduction of the poppy economy would create an economic shock throughout the country. Beyond this first group, which represent 15% of the total population, there are as many if not more benefiting indirectly from opium-related cash and activities.

There's nothing farmers can grow that'll make them nearly as much cash as opium does. And other Afghans depend on those growers for their livelihoods. Until that changes, it seems like stamping out Afghan opium production is a fool's errand.