Share All sharing options for: Caribbean coral reefs could disappear "within a few decades," report warns

Coral reefs in the Caribbean are on track to "virtually disappear within a few decades," a major new report warns. But there's also a way to slow decline. Protecting just a single fish — the brightly colored parrotfish — could help save the reefs from doom.

Protecting the parrotfish could save the reefs from doom

There's little doubt that the Caribbean's coral reefs have declined sharply since the 1970s, under heavy stress from invasive pathogens, overfishing, coastal pollution, tourism, and now global warming that's heating up the oceans.

It's reached the point that many conservation groups have given up hope for the Caribbean and are shifting their attention to protecting coral reefs elsewhere.

But it may be too early to give up altogether. The new report, from the Global Coral Reef Monitoring Network, takes an in-depth look at the decline of the Caribbean coral reefs between 1975 and 2012. While the authors find that the situation is indeed bleak, they also outlines a series of steps that could halt the destruction.

Crucially, the report recommends new protections for the region's parrotfish, which has long played a vital role in eating up algae that threatens to overrun the reefs (the parrotfish's feeding habits also help replenish coral sand). In recent decades, the parrotfish has been a victim of overfishing — and coral reefs have suffered as a result.

Reversing that trend, the report notes, would be a crucial step, not least given the central role that reefs play in the region — from supporting tourism to nurturing fisheries to protecting against hurricanes and other storms.

Why the Caribbean's coral reefs are dying 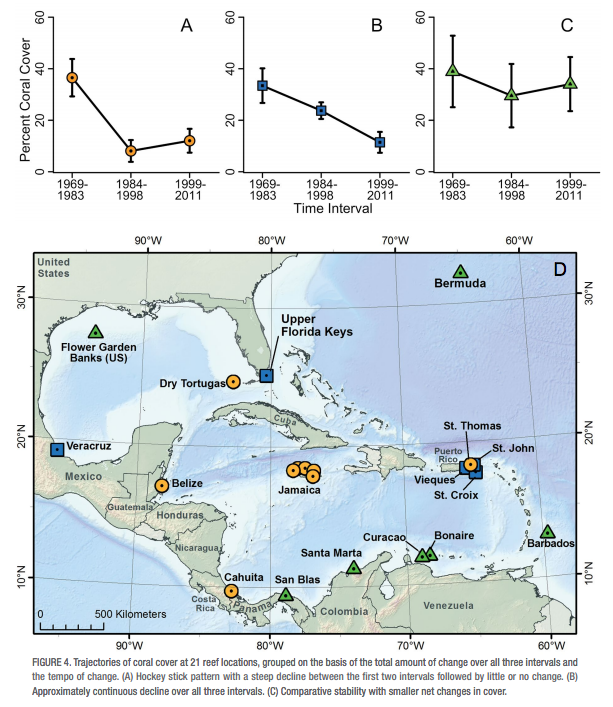 The report found that average coral cover in the Caribbean — that is, the proportion of reef surface covered by live coral — has declined from 34.8 percent in the 1970s to around 16.8 percent today.

And, if anything, that understates the damage, since much of the decline happened before coral scientists even began working on the reef and establishing a baseline.

The report also notes that the decline of the Caribbean happened in three distinct stages: 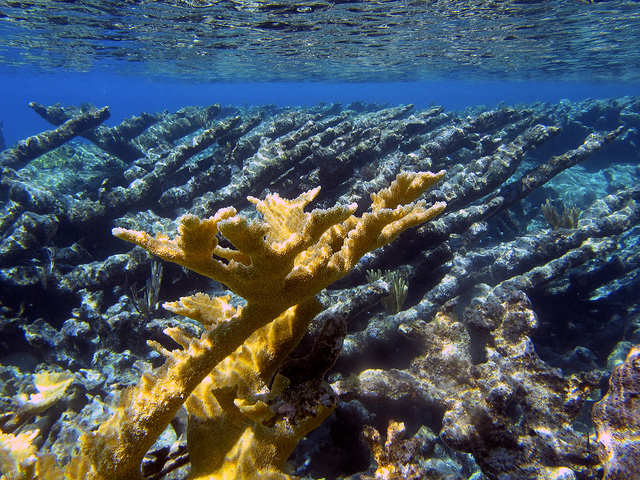 1) Foreign pathogens: In the early 1970s and 1980s, Elkhorn corals (right photo) began dying off en masse, likely due to foreign pathogens transported in the ballast water of bulk carrier ships. (Because the Caribbean was so isolated for millions of years before the arrival of Europeans, its reefs are incredibly vulnerable to outside species.)

2) Algae invasion: There was another huge decline in coral in the 1980s as algae began taking over the reef. That mainly happened because two of the biggest consumers of algae began disappearing. Another mysterious pathogen began killing off the sea urchin Diadema antillarum. And heavy spearfishing and fish traps led to a decline in the parrotfish.

3) Continued loss due to human activity. The report notes that the region's coral reefs have continued to decline in the 1990s, for a variety of reasons:

In almost all regions, heavy tourism seems to be damaging the reefs

In almost all regions, heavy tourism seems to be damaging coral reefs. And the big problem here actually isn't from tourists going snorkeling among reefs. Instead, most of the damage comes from sediment and nutrient run-off from hotels, roads, and golf courses, as well as the dredging of harbors to make way for giant yachts and cruise ships. (There are only a few places where coral reefs have thrived despite heavy tourism, such as Bermuda — likely due to strict protections.)

Overfishing is another major factor — particularly of the parrotfish. The report notes that coral reefs that have suffered from overfishing are less likely to recover after hurricanes and large storms.

The report also mentions two smaller factors. Coastal pollution has increased in countries like Belize, although there hasn't been much work linking pollution to increases in coral disease. What's more, warmer ocean temperatures due to climate change appear to have been a factor in coral bleaching and the spreading of disease in regions like Puerto Rico and the Florida Keys. So far, however, this hasn't been a major factor.

All told, however, the warning is fairly urgent. "Caribbean coral reefs and their associated resources will virtually disappear within just a few decades" — unless new protective steps are taken.

How to stop the reefs from vanishing 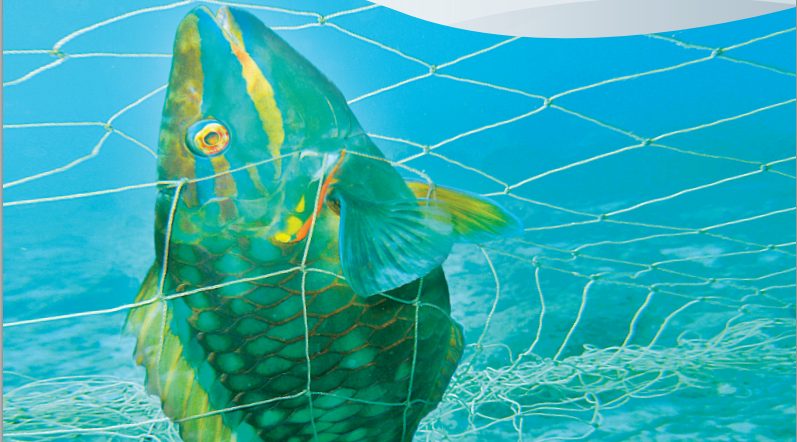 Stoplight parrotfish caught in a grill net. Image from the cover of the Global Coral Reef Monitoring Network report.

The report puts a lot of emphasis on protecting the parrotfish, which feeds on the algae overrunning many reefs right now. The fish has become increasingly important to reef health ever since a mysterious pathogen killed off Diadema sea urchins in the 1980s.

Most parrotfish are under threat from spearfishing and fish traps. And the report proposes enacting new protections for the species under various existing treaties and programs.

Crucially, there does seem to be evidence that protecting the parrotfish works. "In some areas of the wider Caribbean (for example Bermuda and the Exuma Cays Land and Sea Park in the Bahamas, and more lately in Belize and Bonaire), active management including bans on fish traps, has led to increases in parrotfish numbers and consequent improvement in reef health and resilience to perturbations including hurricanes. This is in contrast to other areas within the Caribbean, where heavily fished reefs lacked the resilience to recover from storm damage."

The report also emphasizes the need for other protections — particularly to shield reefs from the harmful impacts of tourism and coastal development.

None of that is easy. But coral reefs are also extremely valuable in themselves. They help attract tourists — a vital industry in the Caribbean. They underpin many key fisheries. And they offer effective protection against storm surges and coastal flooding during hurricanes. One recent study found that coral reefs may be more effective than artificial seawalls in protecting against the rising seas.