8 reasons to ignore the latest round of inflation hysteria

Share All sharing options for: 8 reasons to ignore the latest round of inflation hysteria

After a bit over five years of catastrophic unemployment and inflation below the Federal Reserve's 2 percent annual target, America's inflation hawks are having a moment. In the first half of the year, the unemployment rate has fallen by 0.6 percentage points to 6.1 percent — if that pace continues, by Christmastime it'll be downright low. Meanwhile, over the past twelve months consumer prices have risen by 2.1 percent — at long last slightly above the Fed's target.

So is it time for Janet Yellen to start curbing inflation? Here are eight reasons to doubt it. 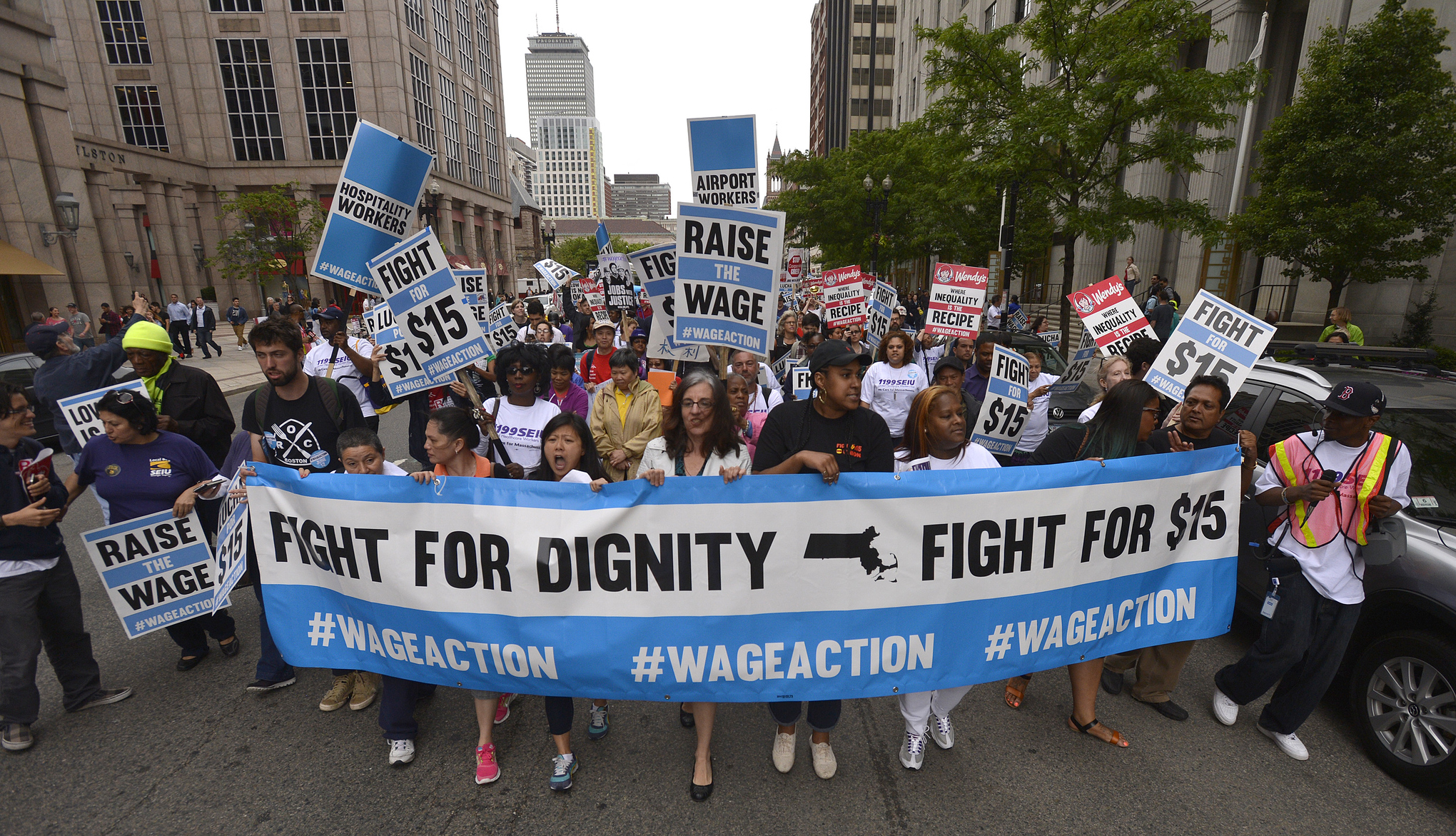 Clamping down on inflation sounds good to most people since everyone would like to see a lower cost of living. But reducing the money supply so that workers in industries that are sensitive to interest rates and currency fluctuations (construction, manufacturing, auto retailing, etc.) lose their jobs isn't a reasonable way to reduce the price of gasoline or milk. The kind of inflation it makes sense to fight with tighter money is wage inflation, and that's exactly what the tight money crowd is worried about.

On June 20, Justin Lahart wrote a Wall Street Journal article headlined "America, Inc. Wakes Up to Wage Inflation" about how companies are concerned that a healing labor market will force them to raise pay and reduce profit margins. Two days after that, E.S. Browning reported for the same paper that "Inflation Is Back on Wall Street Agenda." But if higher wages sound good to you, then ringing the alarm bells about inflation doesn't make much sense. 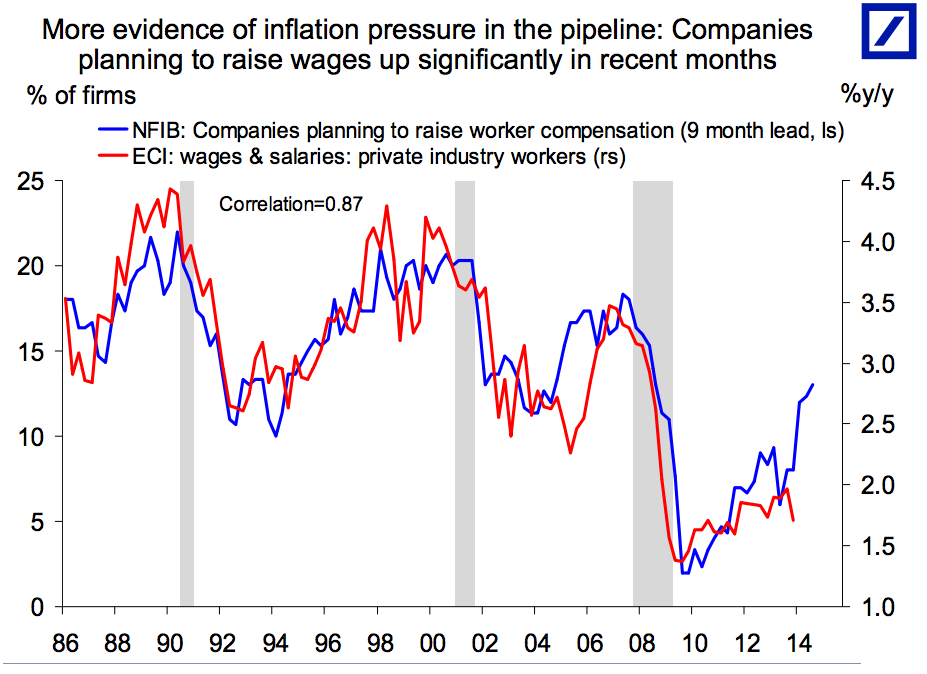 It's a sign of how weird America's priorities have become that Torsten Slock of Deutsche Bank actually presented the chart above as evidence that wage demands are getting out of control.

The red line shows actual wages. It says that since 1986 the five worst years for wage growth were 2009, 2010, 2011, 2012, and 2013 and that 2014 is set to be the sixth-worst. The blue line shown an indicator of wage pressures, and it shows that pressure has risen from its weakest reading ever all the way back up to a level that we previously only saw at the low-points of business cycles. If you think that Ronald Reagan's second term, and every single year of the Bush, Clinton, and W. Bush administrations featured out-of-control wage inflation, then you should worry about wage inflation today. But not otherwise.

3) Workers have been taking it on the chin 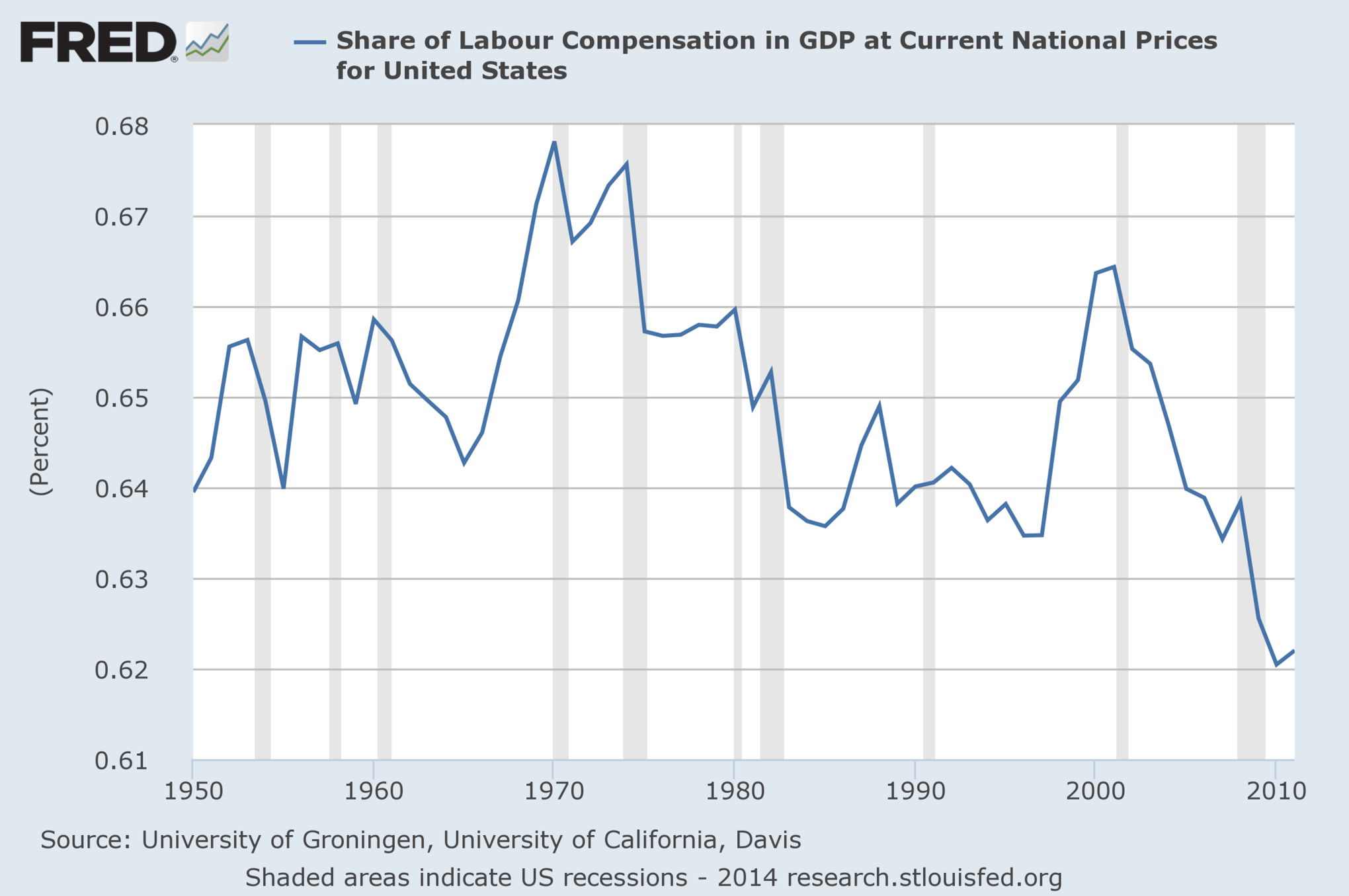 It is totally understandable that business executives aren't thrilled about the idea of reduced profit margins. That's their job. But while it's entirely true that the share of national output going to labor compensation has risen lately, it's been rising from record lows.

It would take a fair degree of additional wage inflation just to get us back to normal. 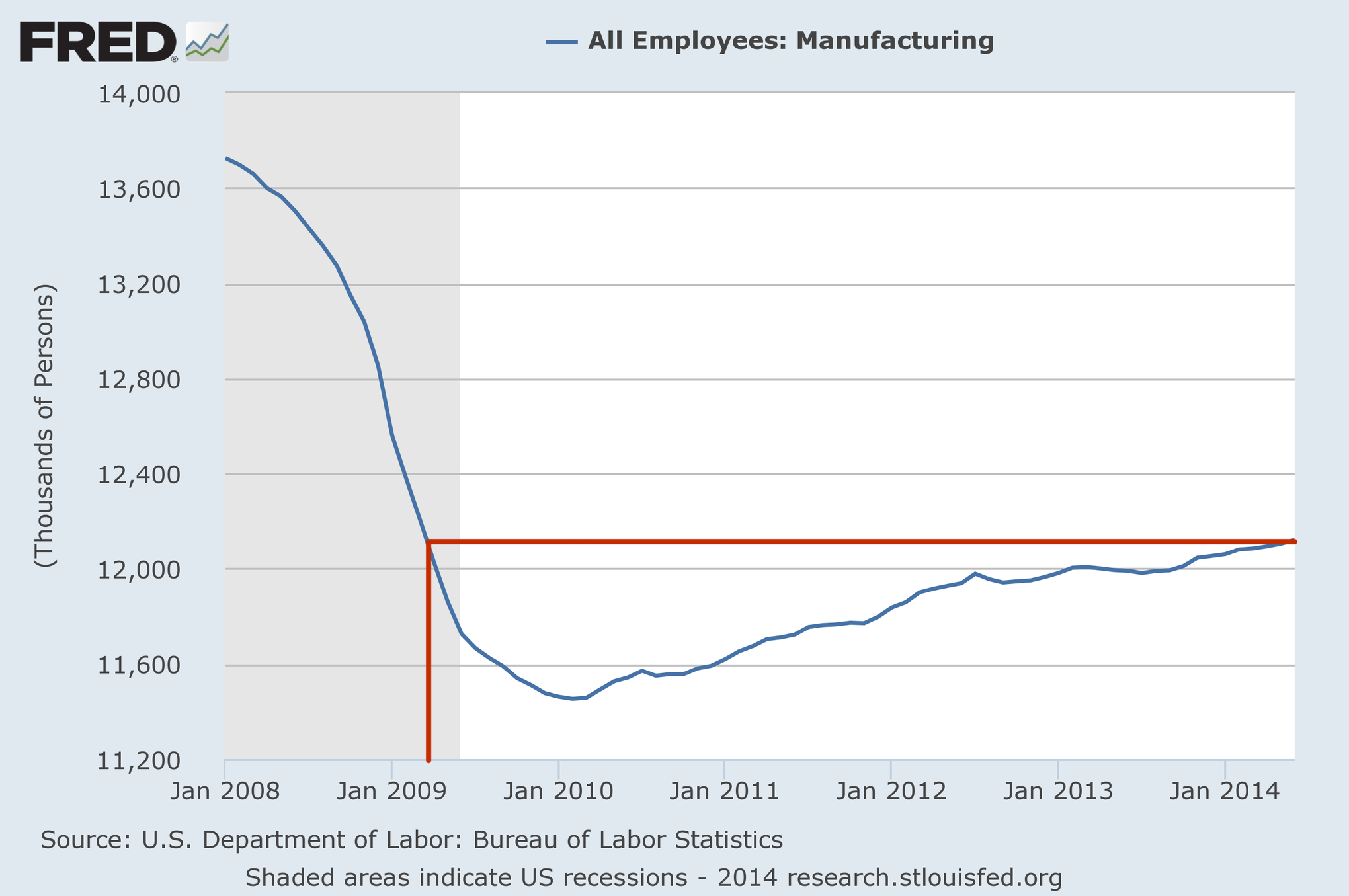 Inflationistas like to point out that "capacity utilization," a measure of industrial output relative to potential, is nearly back to its long-term average level.

But consider a simpler method of industrial capacity — the manufacturing workforce. Despite years of much-hyped growth, we have over on million fewer people working in manufacturing than we did at the start of the recession. Indeed, we have slightly fewer manufacturing workers employed today than we did in January 2009, a time when nobody thought the economy was running out of slack.

It may be true that we will soon be faced with a below-average amount of excess manufacturing capacity. But we just suffered through a years-long spell of an above-average amount. So what's wrong with spending a few years in the other direction? It will give businesses an incentive to invest and grow our industrial infrastructure.

5) States are poised to cut taxes and fees 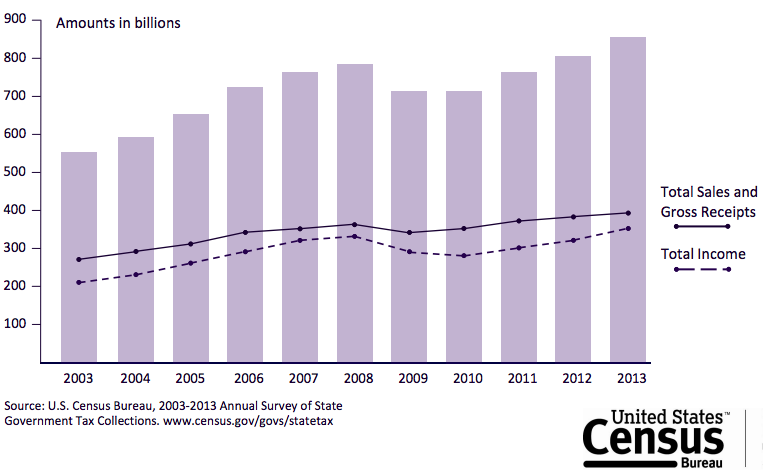 The recession took an unprecedented bite out of state government tax revenue, forcing governments to not only reduce services but also to raise taxes and fees (the latter of which can often — in the form of higher bus fare, for example — play politically as a spending cut). This is a subtle but real source of inflation in American life.

With revenue rebounding strongly on the backs of economic growth, governors and state legislators will have again have the ability to pull off the political magic trick of cutting taxes without reducing services. Those tax cuts will moderate price growth naturally in a way that doesn't restrain wages or reduce employment.

6) The jobs gap is still enormous 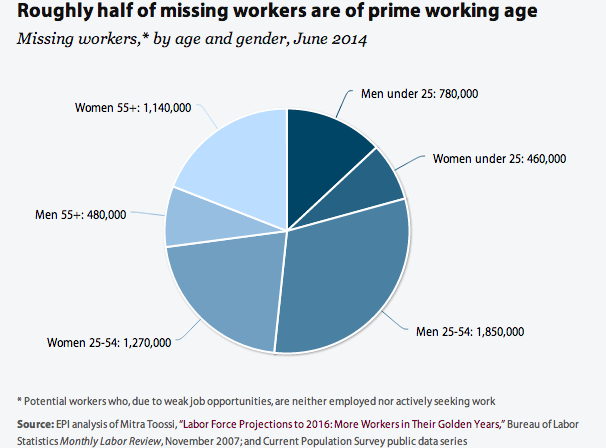 The economy continues to be afflicted by over 5 million "missing workers" who are neither employed nor actively seeking work. Some of these workers are over the age of 55, and perhaps simply in a state of irrevocable early retirement. But as this chart from the Economic Policy Institute shows, over 3 million of them are in prime working years and another 1.5 million are below the age of 25.

Macroeconomic policy dedicated to preventing currently employed workers from ever securing a raise essentially guarantees that no employer will ever face a strong business case for taking a risk on these missing workers. Yet keeping millions of able-bodied adults out of the workforce will do permanent harm to the American economy. 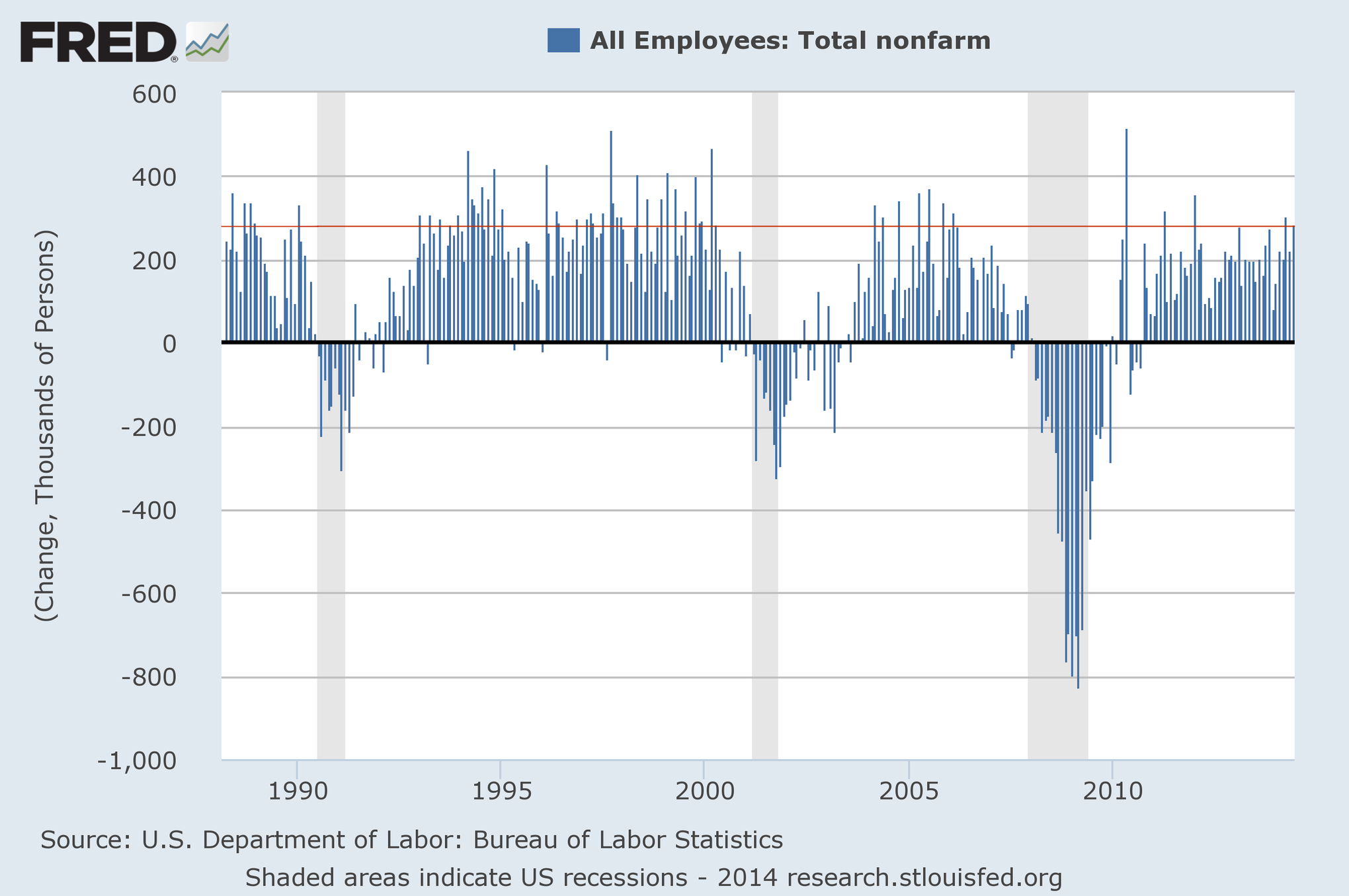 The 288,000 jobs the economy added in June represented a perfectly decent level of job growth which, following hot on the heels of several other perfectly good months, has people in a happy mood. And rightly so. After a prolonged span of sub-par job growth it's natural to be happy about a return to normalcy. But don't mistake the past few months' worth of job growth for some kind of crazy boom.

Months better than this have happened many times in the past, and during the robust prosperity of the 1990s they happened regularly. It is possible that we won't be able to return to that kind of job creation without inflation first reaching uncomfortably high levels. But given that we have seen much faster job creation in the past, we owe it to ourselves to at least aim for it and see if we can achieve it.

Critics of expansionary monetary policy tend to propose instead, as John Cochrane did last week in the Wall Steet Journal, that we focus on supply-side reforms to create jobs. But this exact same logic can be applied in reverse. Throwing people out of work to moderate pressure on consumer prices is perverse in a world where many price pressures could be alleviated by improving public policy.

Allowing nurse-practitioners to treat patients autonomously could bring down health care costs. More broadly, many states have created a wide range of price-increasing occupational licensing cartels whose reform would reduce prices. Changing zoning laws to allow for more construction would ameliorate rent increases. The regulatory landscape is littered with potentially price-reducing regulatory reforms, ranging from over-the-counter oral contraceptives to embracing Uber and other similar companies (Lyft and Sidecar in the taxi industry, AirBNB in hotels).

Supply and demand intersect throughout the economy, of course, but insisting on demand-side solutions to supply bottlenecks in the housing and medical care sectors is especially perverse. Moderating rents and doctors' bill by engineering a situation in which people have to live in their parents' basements or skip routine treatments is absurd and destructive of the sources of long-term prosperity. The Fed should commit to keeping the labor market recovery on track, and challenge legislators and regulators to improve policy in other areas.