Your complete guide to firework injuries in America

Share All sharing options for: Your complete guide to firework injuries in America

Last year, according to the Consumer Product Safety Commission, 11,400 people went to emergency rooms due to injuries suffered from fireworks. Eight people died.

The government keeps excellent, detailed data on all these injuries, published in the CPSC's annual report. The agency keeps especially close track of the 65 percent of firework-related injuries that occur in the month surrounding July 4 (between June 21 and July 21).

Here's a deeper dig into who suffers these holiday injuries, what types of explosives cause them, and what types of injuries most frequently occur.

Who is most likely to be injured by fireworks?

The short answer: males and children.

Males account for 57 percent of the injuries in the month surrounding July 4. Though all eight of the fireworks fatalities in 2013 were adults, a disproportionate number of the injuries happened to children. 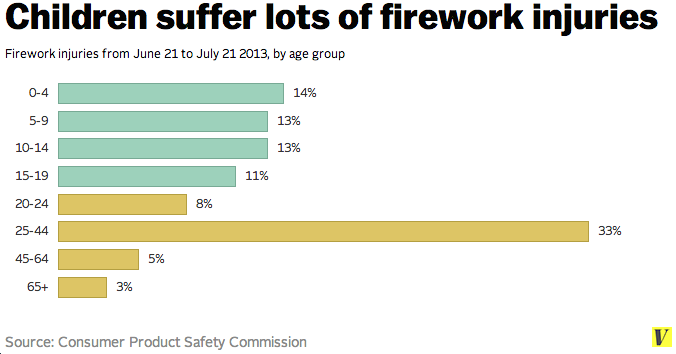 In total, people under the age of 14 experienced almost as many fireworks-related injuries as everyone over the age of 25. This trend is also apparent in data from previous years.

A huge amount (79 percent) of the injuries to children under five were caused by small sparklers, something that wasn't true for the other groups. The lesson: don't give your cute little kid a sparkler, even if it seems harmless.

Where is someone most likely to get injured?

Most of the injuries, as you might expect, are to body parts exposed while you're lighting a firework: the hands and face. 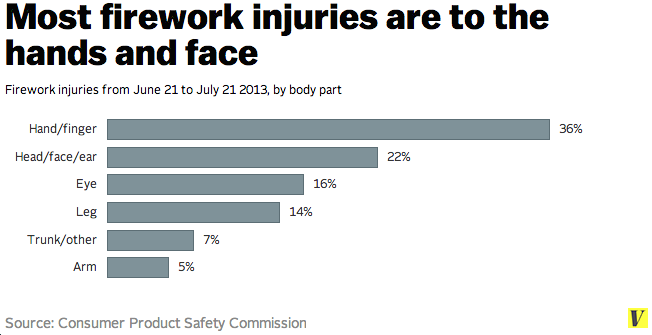 The CPSC made calls to investigate a small subset (35) of the injuries that occurred. This is probably too small to extrapolate much about firework injuries in general, but it does reveal some of the things that cause injuries to occur.

Are fireworks-related injuries going up?

It doesn't appear so.

True, the 11,400 injuries that occurred in 2013 represented a 31 percent increase from the previous year, a fact that the CPSC trumpeted in its press release accompanying the report. But as FiveThirtyEight noted, firework injuries haven't really been increasing over time.

On a per capita basis, fireworks injuries are relatively rare (last year's 11,400 number works out to 3.6 injuries per 100,000 people), so this increase is mostly a result of the high degree of random variation from year to year. 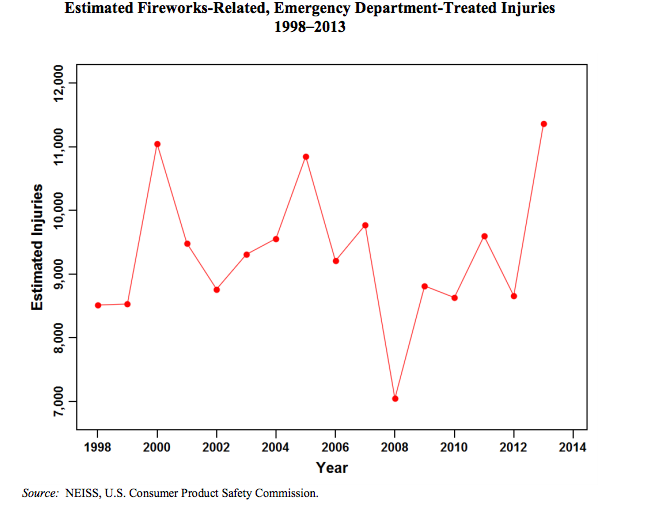 How can I avoid being injured by fireworks?

As it happens, the CPSC provides all sorts of excellent tips on ways to stay safe when lighting fireworks.

Some of the most important tips: never give a firework or sparkler to a child, don't put any part of your body in the path of the firework when lighting the fuse, and move back quickly after lighting.

Are there any utterly bizarre videos I can watch on this topic?

Indeed. As my colleague Sarah Kliff pointed out, the CPSC puts out all sorts of unorthodox videos on the topic of firework safety, in addition to conducting tests on the National Mall with child-size mannequins. Here's one of their finest: