Where Americans find the money to pay for college

Share All sharing options for: Where Americans find the money to pay for college

A strong majority of American families don't think students' should have to foot the entire bill for their college education, a new national survey shows. One in 5 families said the student should be solely responsible for paying to attend college. 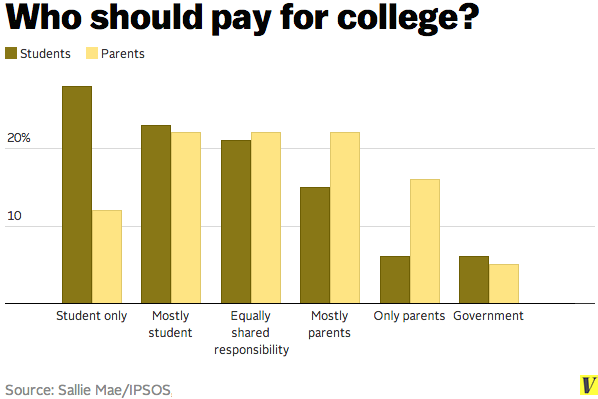 Sallie Mae surveys 18- to 22-year-olds and their parents each year about how they're paying for college, how much they've planned in advance, and where the money comes from. They found that for the average student, paying for college is a shared responsibility, with grants from the federal government, states and colleges themselves covering a large chunk of the sticker price:

Federal financial aid policy assumes that parents will bear the responsibility of paying for college, and students whose parents can afford to pay but refuse to are mostly out of luck when it comes to getting more government help. That means the 9 percent of students from high-income families whose parents said they should pay for college on their own are likely to struggle, or rely on loans, to pay the bill.