Share All sharing options for: Up to a quarter of Gaza residents have been forced from their homes

About a quarter of the population of the Gaza Strip may have been displaced during the ongoing fighting between Israel and Hamas, according to a United Nations Office for the Coordination of Humanitarian Affairs (OCHA) tally. That is very, very bad — both in humanitarian and political terms.

There are about 1.7 million Palestinians in Gaza, and OCHA estimates that up to 445,000 of them have been forced from their houses. Of that 445,000, about 245,000 are in UN shelters. The Palestinian Ministry of Social Affairs estimates that "as many as 200,000" more are "taking shelter with host families:" family members, friends, or others elsewhere in Gaza who haven't been forced from their homes. Together, the two figures combined produce the high-end 445,000 estimate.

Gaza is a small, densely populated place — about as large and as dense as Philadelphia in total. During the war, the Israeli military declared about 44 percent of the Strip a "no-go" zone, telling the 250,000 living there to evacuate. This OCHA map illustrates what that looks like — the no-go area is in red — as well as where refugee shelters have been set up: 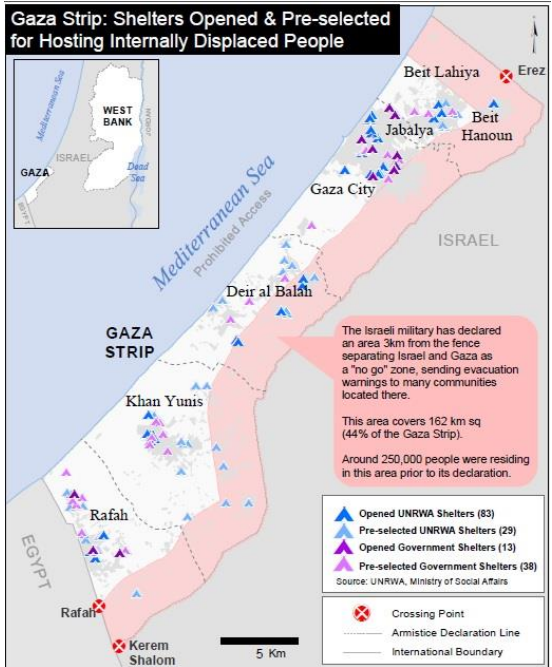 Combine the inevitable consequences of urban warfare with the no-go zone, and you get the terribly high displacement levels that OCHA documents.

One immediate concern is protecting civilians in crowded refugee centers and homes. Six schools, serving as shelters operated by the UN Relief and Works Agency (UNRWA), have been hit during the fighting. One of those strikes claimed about 15 lives and wounded about 100; UN Secretary General Ban Ki-moon said on Thursday that "all available evidence" points to an Israeli strike hitting the school.

This matters even beyond the immediate dangers and pains of displacement; after the fighting stops, it's not just a matter of putting displaced persons back in their homes. For one thing, their homes might be destroyed. But even for those whose homes are intact, returning may not be so simple. Patricia Weiss Fagen, a former senior fellow at Georgetown's Institute for the Study of International Migration, writes that displaced persons "lacked safety, economic opportunities, and essential services" and "may continue to live as strangers and second-class citizens even when they return to their original homes."

The upshot, according to Fagen, is that long-term relief efforts, and not just short-term humanitarian aid, are necessary to help refugees. In Gaza, where the unemployment rate is estimated at about 40 percent during times of non-war, long-term assistance may be particularly hard to provide.

'the current path of the conflict, and its fiery rhetoric, offer Hamas opportunities to present itself as more in line with the times'

There's also a political dimension to this. A number of studies suggest that displaced persons crises deepen support for extremist groups. Pakistani extremist groups, for example, have a history of using displaced person relief efforts as a means of disseminating their ideology. We're helping you, the line goes, so you should join us. Somali youths stuck in the Dadaab refugee camp in Kenya, furious at their situation, are "a valuable source of fighters for [Somali extremist group] al-Shabaab," according to a Harvard Belfer Center report.

Similarly, the displaced persons crisis in Gaza could well translate into more support for Hamas and other hardline groups. Hamas' popularity, according to George Washington University's Nathan Brown, is a result of its ability to sell its "uncompromising" position on Palestinian rights and its "ability to articulate the deep senses of frustration and injustice that most Palestinians feel."

Brown thinks "the current path of the conflict, and its fiery rhetoric, offer Hamas opportunities to present itself as more in line with the times." The fact that up to a quarter of Gazans have been displaced could certainly give them that opportunity.