Here's the rover that will explore Mars in 2020

Share All sharing options for: Here's the rover that will explore Mars in 2020

In 2020, NASA will launch a second, upgraded version of its Curiosity rover to continue exploring Mars.

At a press conference Thursday, NASA scientists announced the seven scientific instruments that will be on board the craft — and revealed that, among other things, it will include an experimental device that can convert Mars' carbon dioxide to oxygen, and have the capacity to cache rock samples so that they might eventually be picked up by another craft and returned to Earth for analysis.

There are still many aspects of the mission that are uncertain — where exactly the rover will land, whether the rock samples will be carried with the rover or left in containers on the surface, and how they might eventually be picked up — but the picture is starting to come together.

The 2020 rover's main goals are exploring Mars to identify and cache rocks that might contain evidence of historical life — and making gradual progress towards human exploration of the planet.

How the 2020 rover will compare to Curiosity 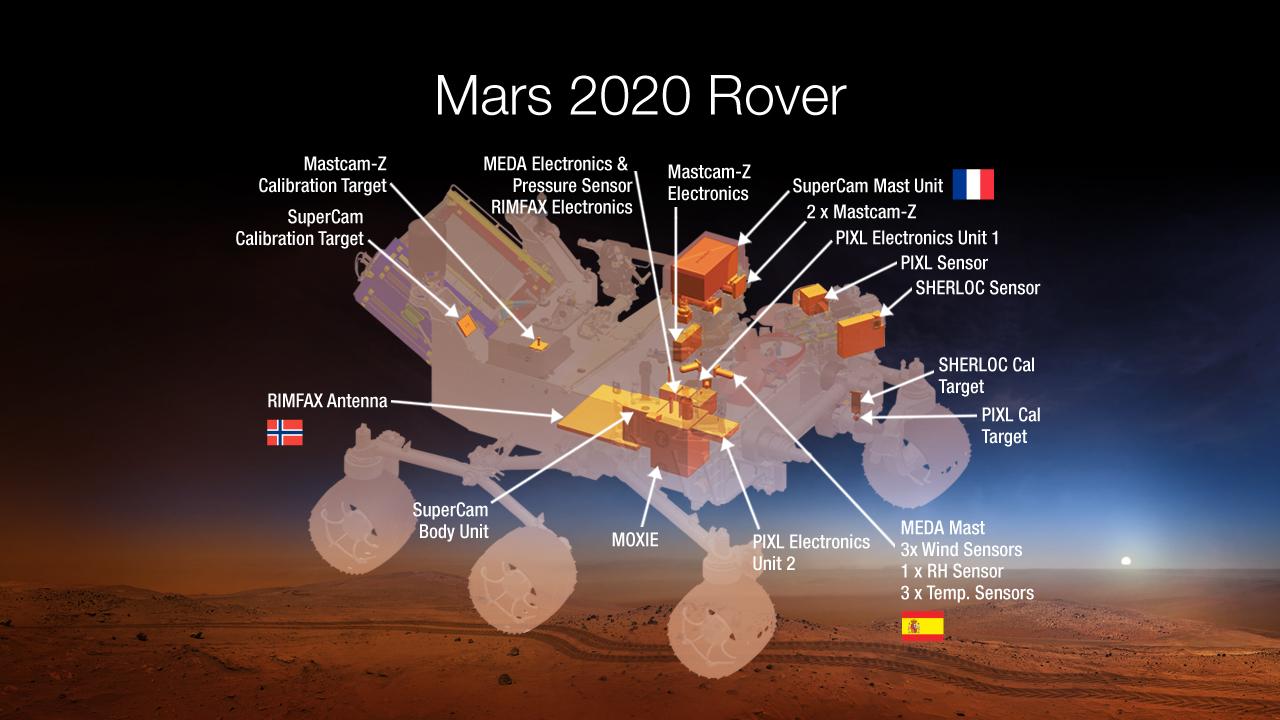 In total, NASA estimates that the 2020 mission will cost $1.5 billion — about a billion less than Curiosity. This is partly because, apart from scientific instruments, the new craft will essentially replicate Curiosity's tested and proven architecture.

The new rover will be built on the same chassis, will land on Mars in the same way, and will crawl across its surface driven by a similar plutonium-powered electric generator. Engineers are seeking to slightly redesign the rover's six wheels to avoid the cracks and holes that have developed in Curiosity's.

One interesting note is that the new rover will actually carry less mass than Curiosity, in terms of scientific instruments — 40 kilograms, compared to 74 — mainly to allow for rock storage. NASA will lighten the rover by eliminating some of the bulkier instruments Curiosity has (such as the mass spectrometer, which heats ground-up rock samples to determine their composition).

But the instruments that the 2020 rover does have are upgraded versions of Curiosity's. The main camera will have a more powerful zoom, allowing the 2020 rover to see farther, and plot a longer path each day before needing to stop and recalculate. In comparison to Curiosity's ChemCam — which can vaporize rock by firing a laser at it, then analyze the radiation given off to determine what elements are inside — the 2020 rover's SuperCam will be able to analyze a broader spectrum of radiation. 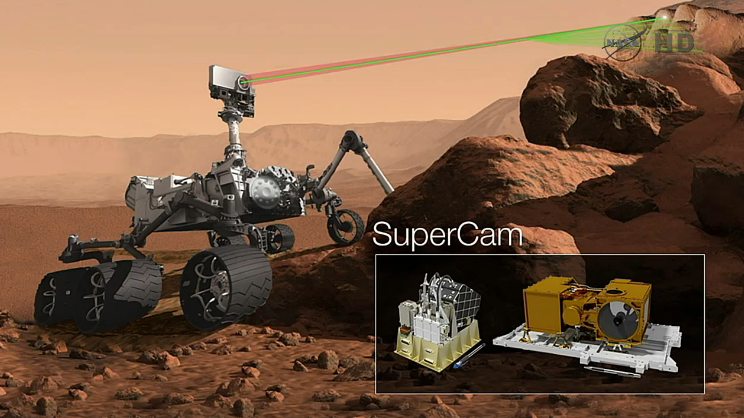 A rendering of the SuperCam. (NASA)

Then there are the entirely new instruments. MOXIE (the Mars Oxygen ISRU Experiment) is a device that will convert atmospheric carbon dioxide into oxygen. It won't produce usable quantities of the gas, but rather conduct research into how feasible it might be to eventually produce it on Mars, perhaps to be cached in advance of the arrival of astronauts, or used as an oxidizer for rockets launched from Mars to return to Earth.

Another instrument included with an eye toward eventual human exploration is a weather sensor, which will provide new data on Martian dust.

The new rover will also have ground-penetrating radar, which will help scientists better understand the link between surface features and the underlying geology, and other new instruments that can image the elements and minerals present in Martian rocks at a finer scale than currently possible.

The big question: Will it collect rocks that we can bring back to Earth? 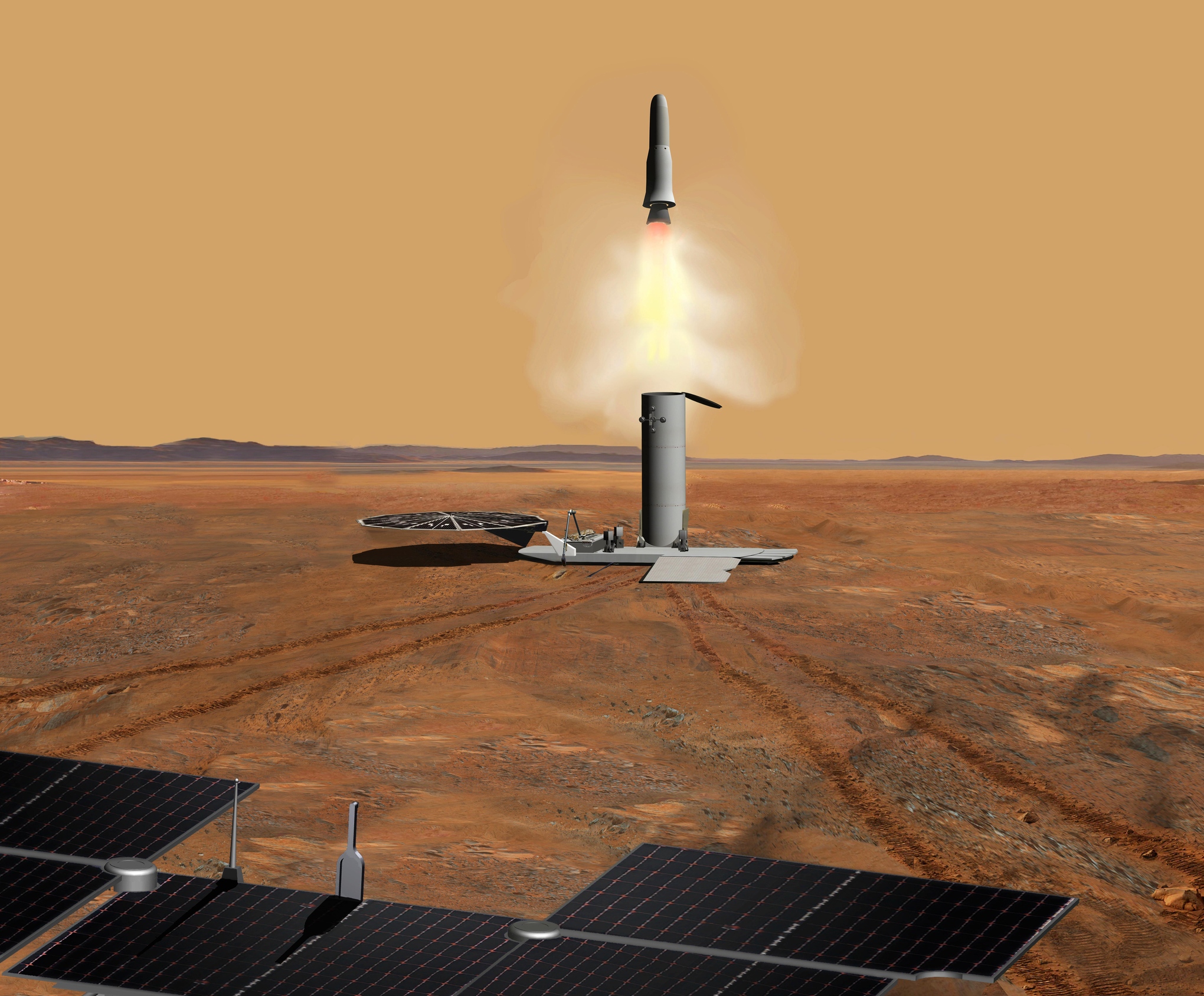 A rendering of a sample-containing spacecraft taking off from Mars. (NASA/JPL-Caltech)

All of these instruments were selected with one priority in mind: finding and caching the rock samples most likely to hold evidence of past life, so they can be analyzed in labs back home.

For decades, scientists have considered sample return the 'holy grail' of Mars exploration

Curiosity mainly analyzes rocks by drilling into them, grinding the sample into powder, cooking it at high temperatures, and detecting the gases emitted. This is helpful for scientists in gaining a basic understanding of Mars — and has told us that the planet may have once had conditions more hospitable to life — but not nearly as effective as the tools we have for analyzing rocks on Earth.

This is why the 2020 rover has no oven for cooking rocks. Instead, it has a coring tool that doesn't grind them in to powder, and will theoretically have some sort of mechanism for either storing the samples long-term or stably leaving them behind in capsules on the Martian surface, to be collected and returned to us later on. NASA hopes to eventually return up to 30 samples this way.

But this is easier said than done. For decades, scientists have considered sample return the "holy grail" of remote Mars exploration, but NASA still isn't explicitly committing to it as a goal of the 2020, and hasn't settled on the specifics of how it would be accomplished. 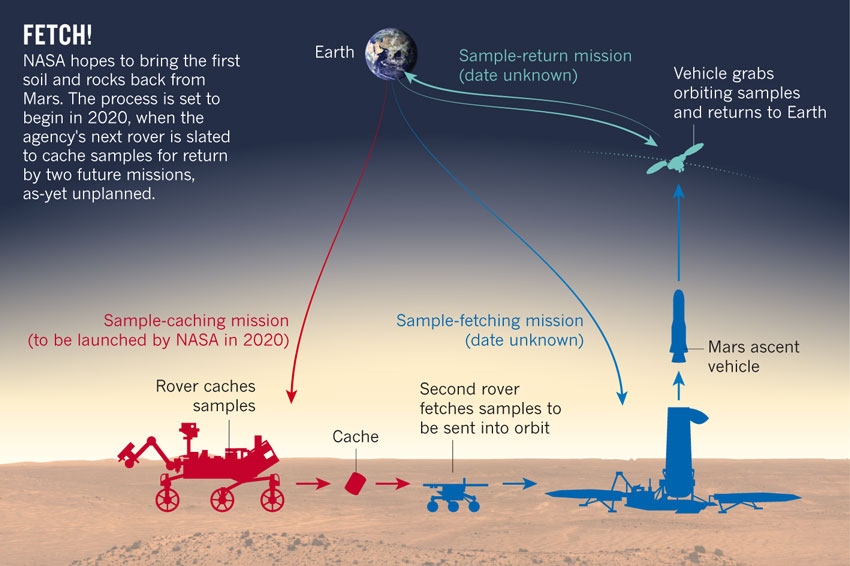 That's because bringing Martian rocks back to Earth is going to be really, really difficult. It'll probably require at least two subsequent missions: one to deploy a rover that will go pick up the samples, put them in a rocket, and lift off from Mars, along with an orbiter that will go grab the samples in flight and bring them to Earth.

But we've never launched a rocket from Mars. Doing so will be tricky because we'd first need to safely land that rocket and all its return fuel on the planet — and merely landing Curiosity was a huge challenge, due to the difficulty of touching down without the craft burning up in the Martian atmosphere or crashing on impact. It'd certainly take years after 2020 for these subsequent missions to arrive (NASA scientists have estimated that cached rock samples could remain stable for at least 20 years).

Still, at the moment, sample return is the next step in Mars exploration. If life ever existed there, finding evidence of it might be difficult — but it would be way easier if we were able to see the samples firsthand.