Kentucky's uninsured rate, before and after Obamacare

Share All sharing options for: Kentucky's uninsured rate, before and after Obamacare

Rep. John Yarmuth, a Democrat from Kentucky, tweets this picture of what uninsured rates look like in his home state before and after Obamacare. It mostly shows some really steep declines in the number of Kentuckians who do not have health insurance coverage. 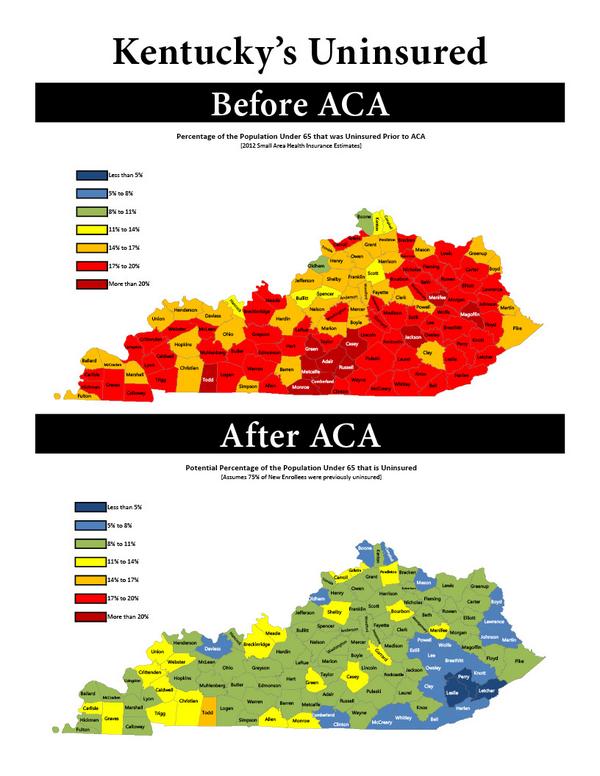 Kentucky has been one of the states' that aggressively implemented the Affordable Care Act. Gov. Steve Beshear has been a big Obamacare cheerleader through the course of the year, pushing forward in a state where opposition can be strong.

"We were working hard to make sure that everything worked, but we had no idea that we would be one of the few whose website would actually work when we started," Beshear told me in an interview last month.

Beshear credits the states' strong commitment to making Obamacare work, even in the face of political opposition, to Kentucky's successful Obamacare launch. But before jumping to any conclusions, let's not deny the role that Wille, the state health exchange's official bunny mascot, may have played as well.

This is Willie, our official #kynect bunny for the fair. pic.twitter.com/e20vEoqbAc