Workers are finally getting raises again

Share All sharing options for: Workers are finally getting raises again

One more sign that life is improving for American workers: paychecks are finally growing faster.

The Labor Department reported Thursday that workers' wages and salaries grew by a seasonally adjusted 0.6 percent during the second quarter, the fastest pace since the third quarter of 2008. 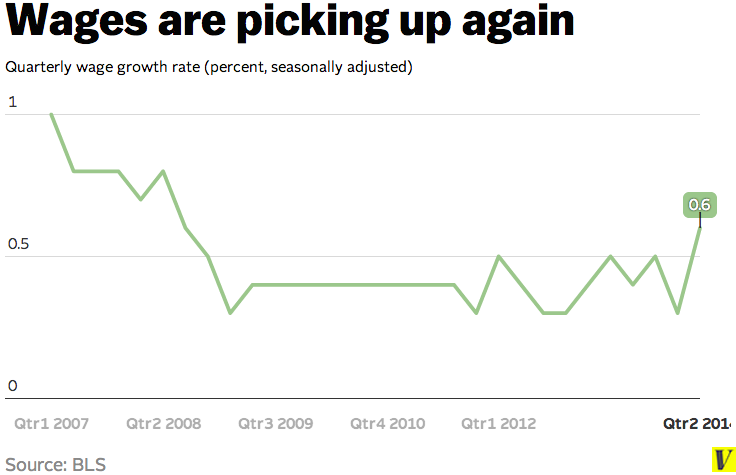 Wages and salaries only make up 70 percent of total compensation, including benefits. Total compensation costs as a whole also grew by a seasonally adjusted 0.7 percent during the second quarter.

Though it's true that wage growth was much faster before the Great Recession, the news is still a sign that the labor market is tightening, as increased demand for labor helps boost paychecks.

The news comes amid a week of signals that the recovery is improving. The Commerce Department reported Wednesday that GDP grew at a faster-than-expected pace in the second quarter, and the Federal Reserve after its most recent meeting acknowledged a healing job market and a pickup in inflation — another sign that wages are on their way up, after price growth had been low and stable for a long time.

Friday's July employment report could provide even further reason for optimism. Economists expect the report to show that employers added around 230,000 jobs in July.