One big obstacle for self-driving cars? People are still scared of them.

Share All sharing options for: One big obstacle for self-driving cars? People are still scared of them.

Transportation experts love to dream of the day when we're all zipping around in self-driving cars. No accidents, no gridlock — just intelligent cars that can handle themselves. Google's even developed a prototype.

But in practice, the public's still a bit leery of the concept.

A new survey by the University of Michigan's Transportation Research Institute finds that a majority of respondents in the United States, Britain, and Australia still have a lot of concerns about actually buying and riding in self-driving cars — even if they find the technology itself extremely promising.

Here are some of the key findings of the research, which was done by the University of Michigan's Brandon Schoettle and Michael Sivak: 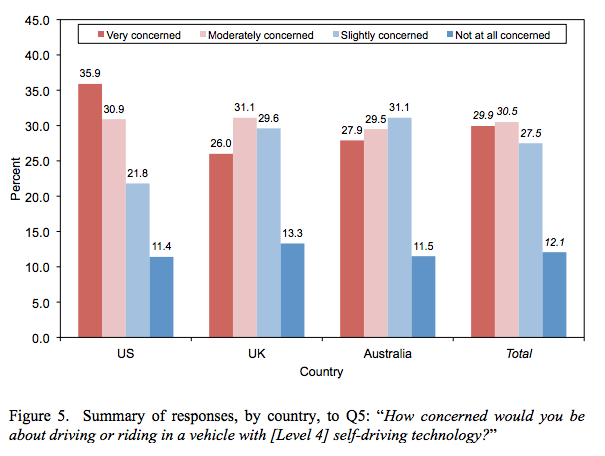 Interestingly, the biggest resistance was in the United States, where 66 percent of respondents had concerns about riding in these vehicles.

One of the big obstacles facing self-driving cars is political

Does that matter at all? It depends. One possibility is that this is no big deal — as the technology develops, self-driving cars will simply become more widely accepted and people will become more comfortable with the concept. That's been true of lots of different technologies over the years.

On the other hand, one of the biggest obstacles that self-driving cars will face involves politics and regulation. Autonomous vehicles will face much more scrutiny — and likely stricter standards — than conventional cars and trucks. "The first accident that's caused by a computer malfunction will freak everyone out far beyond the thousands of car accidents caused by humans," Eno Center of Transportation Director Joshua Schank observed last year. If the public is deeply concerned about the technology, then lawmakers could be more likely to impose strict regulations on the vehicles.

2) Few people would pay extra for a self-driving car 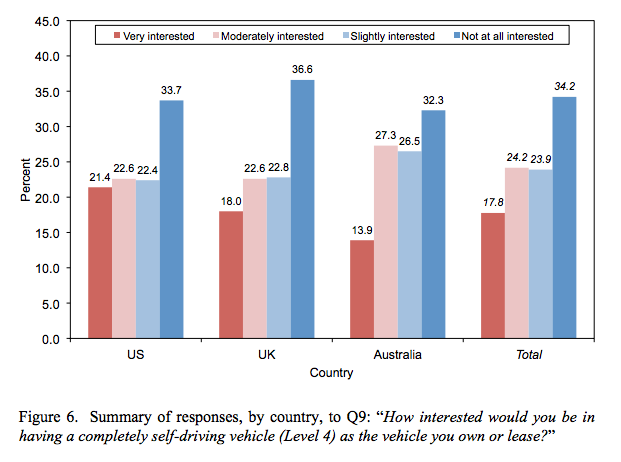 The survey found that 42 percent of people would consider buying or leasing the car. That's not a majority, but it does seem promising — as it would allow the technology to gain a foothold.

That's one potential hurdle. For now, self-driving cars are projected to cost much, much more than that. By one estimate, the first wave of autonomous vehicles could cost over $100,000 — five times the cost of the average new vehicle. Even that might be an underestimate: The 3-D sensors alone on Google's autonomous car cost about $70,000. Those costs would presumably come down over time, but no one knows how rapidly. Plus, there's the possibility that strict regulations could drive the price up further.

Perhaps this suggests that individual consumers won't be the biggest buyers of these cars initially. Maybe taxi services or companies like Uber will be the early adopters. (Although they'll have to worry about concerns from riders.) Alternatively, freight and shipping companies could be early adopters of self-driving trucks — so long as they make financial sense.

3) Still, lots of people think self-driving cars would be a huge boon to society 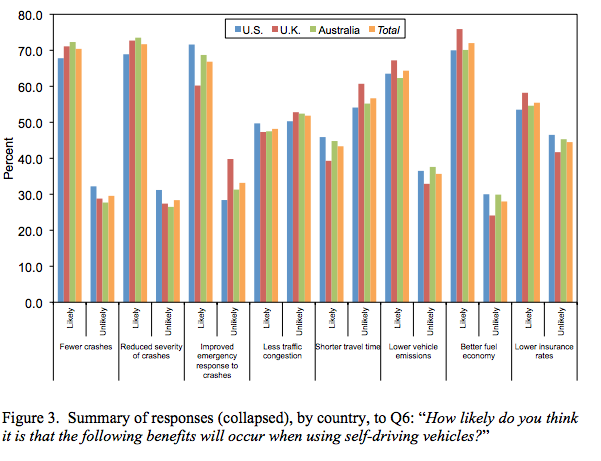 The survey also found that 57 percent of respondents in the United States, Britain, and Australia had a favorable impression of self-driving cars. One reason? They think the vehicles will have big social benefits.

Advocates of self-driving vehicles tend to toutall sorts of advantages to letting robots take the wheels. Right now, more than 33,000 people die each year in the United States from automobile crashes. And roughly 40 percent of fatal accidents are caused by alcohol, distraction, drugs, or fatigue, all of which go away once you take human off the wheel. Letting robots take the wheel would save lives.

Self-driving cars could also ease congestion — at least in theory. Commutes would be quicker, as cars driven by robots could travel at steadier speeds and avoid traffic jams. What's more, commuters could kick back and read a book or nap rather than stressing out behind the wheel.

There's also fuel efficiency. Once we no longer need clumsy human drivers, then self-driving cars and trucks will be able to bunch close together at steadier speeds.The Rocky Mountain Institute estimates that the reduction in wind drag alone from vehicles traveling closely together could reduce fuel use 20 percent to 30 percent. What's more, cars would no longer need to be so big and hulking — since their users don't need to fear crashing as much.

As the chart above shows, most people are already persuaded by these arguments (well, most of them — the congestion one still seems to be a bit counterintuitive). The big hurdles, the survey suggests, are cost and people's initial concern about actually riding in an autonomous vehicle.

15 ways that self-driving cars could change our lives

Driverless cars will mean the end of mass car ownership

Why trucks will drive themselves before cars do