Share All sharing options for: Chart: How Detroit's recovery backslid after bankruptcy

Detroit has been on the decline for decades, thanks to a dwindling population and a declining auto industry (and the recent recession didn't help). A new analysis from the Chicago Fed finds the city had posted relatively strong jobs numbers...that is, until the city entered bankruptcy.

Detroit filed for bankruptcy in July 2013 and entered bankruptcy in December. And it was right in that window, writes Chicago Fed economist Rick Mattoon, that Detroit's recovery started to fall behind its neighboring states in the 7th Fed District. Around then, the city's employment growth slid sharply and even went negative recently. 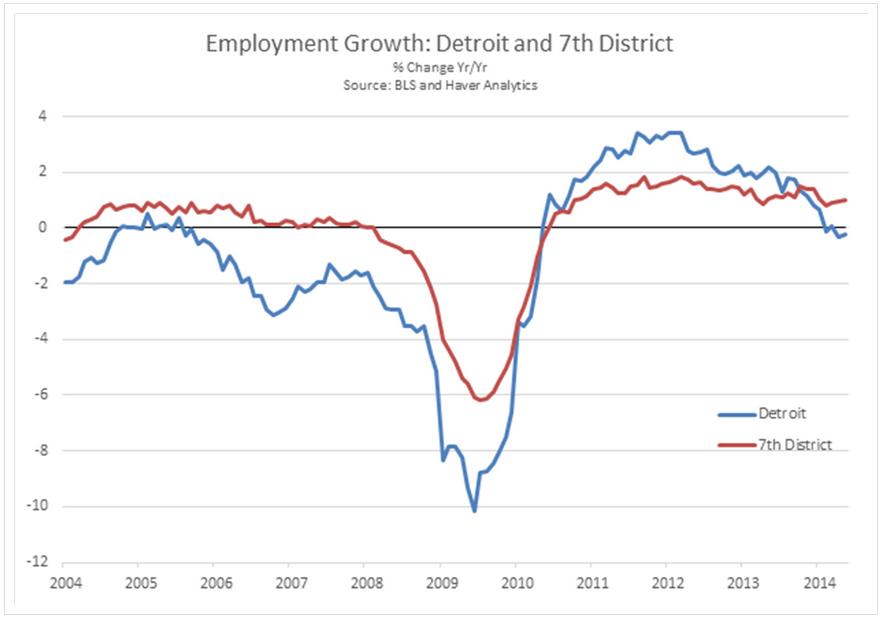 "[E]merging from the Great Recession, Detroit's employment growth is above the Seventh District average up until late 2013 and early 2014, which happens to coincide with the bankruptcy filing," he writes.

So is it all a coincidence? Not exactly.

"I think it's partially cause and effect," says Mittoon. "Bankruptcy introduces a lot of uncertainty. It's hard for people to make investments in Detroit until they know the outcome of the bankruptcy." In addition, pension cuts could hurt consumer spending all the more, further hitting economic growth.

The embattled city has endured some ugly developments since December. Those developments paint a picture of a city in crisis. In May, for example, the city reported it had tens of thousands of blighted homes. Thousands of residents saw their water cut off starting in June.

Of course, not all of the city's problems are related to the city's fiscal woes. Bankruptcy is just one step toward Motor City getting back on its feet. However, that process in some ways could make things worse before things get better.

Before the city can again be a magnet for investment and see meaningful economic growth, ways Mittoon, it will have to work through the dozens of issues associated with bankruptcy. In particular, he points to the $1.5 billion that emergency manager Kevyn Orr has proposed to improve services like public safety over 10 years.

"If they can do that it will make them a much more attractive city," he says. "Until that's clear, it's going to be an issue."