How an American hedge fund forced Argentina into default

Share All sharing options for: How an American hedge fund forced Argentina into default

Argentina is famous for its defaults on sovereign debt, so the news that it defaulted on bond payments again this week is likely to be greeted by most people with a shrug and an Evita reference.

But this time around the default was different, prompted much less by irresponsible economic policy in Buenos Aires than by irresponsible legal policy in Manhattan. An American hedge fund got greedy, advanced a legal theory that was rejected by the US government and most major banks, won its lawsuit anyway, and in the end didn't get paid but did force Argentina into default.

It's a kind of weird story.

To understand Argentina's default in 2014, you need to go back to its 2001 default. That default, in turn, had its roots in Argentina's earlier monetary policy. The country had abandoned the idea of an independent exchange rate instead of a fixed peg to the dollar. That dollar made foreigners more inclined to lend to Argentina and fueled a credit boom. But eventually fallout from the economic crisis in East Asia in 1997 made investors more skeptical. As their money left the country, Argentina fell into a deep depression. 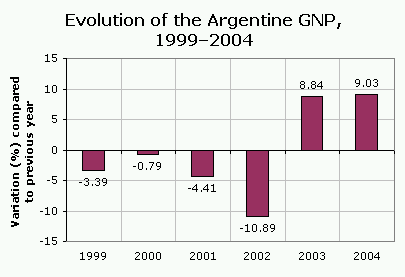 After several years of economic decline, things came to a head in 2002 when the country finally abandoned its currency peg and defaulted on its outstanding debts. In the very short-term, that only seemed to increase the chaos. But the new currency policy led to strong bounce-back growth in 2003 and 2004 that continued on for several further years.

By 2005, Argentina was back on its feet and looking to normalize its relationships with the outside world. Part of that was trying to do a deal with the holders of those bonds it had stopped payment on. In January, Argentina made an offer. Holders of old debt could abandon their non-performing claims and in exchange get new bonds — less onerous than the old ones, but where interest would actually get paid.

About 75 percent of outstanding bonds were exchanged. Then in 2010, there was a new offer to the remaining holdouts that brought participation in the swap all the way up to 93 percent. In the meantime, the market value of the holdout bonds had sunk quite low. Hedge fund manager Paul Singer came to own a large share of the non-performing bonds via his distressed debt fund. And he began pursuing a variety of strategies — including seizures of Argentine assets abroad — to try to get his money. But his boldest strategy was litigation in a New York federal court.

Singer got District Court Judge Thomas Griesa to rule that under New York law, the arrangement whereby Argentina paid some of the people to whom it owed money but not the others was illegal. And violating the traditional principle that there's no real way for courts to enforce a ruling against a sovereign debtor, Griesa ruled that there was a legal mechanism available to force payment. Most of the exchange bonds were paid via financial institutions that did considerable business in New York. Griesa could — and did — order those institutions to refuse to have anything to do with handling Argentina's bond payments until Argentina began paying the holdouts the full original amount of money they owed.

It is not entirely clear what Griesa (or Singer for that matter) thought would result from this, but Argentina's politics and finances made it unthinkable for Argentina to pay up to Singer.

The case was appealed up to the Supreme Court, which declined to hear it, and then there were several last-ditch efforts at a settlement. But yesterday it became clear that the parties are sticking to their guns. Argentina will not pay more to Singer than it pays to the people who accepted the terms of its debt swap, Singer will not accept that, and Griesa will not let Argentina pay its bondholders if it doesn't have a deal with Singer.

The litigation is fascinating to international finance nerds, but shockingly light on larger implications. The default will likely be a small disaster for the economy of Argentina, which is already running into a lot of problems. But Argentina is not big enough to throw the world into any kind of financial chaos.

Meanwhile, countries are unlikely to face this problem in the future. Newer bond issuances normally include "collective action" clauses in their contracts designed to specifically avert this kind of situation.