What Republicans want to do if they win the Senate

Share All sharing options for: What Republicans want to do if they win the Senate

After some brutal end-game polling for Democrats, Republicans look extremely likely to win the Senate tonight. The question is: what happens next?

Republicans already control the House. And Democrats are going to hold the White House. Over the summer, I asked Senate staffers on both sides of the aisle whether Majority Leader Mitch McConnell would actually change anything in Washington, at least between 2014 and 2016, or whether it would just mean continued gridlock. Here's what they told me. (Staffers were granted anonymity so they could speak freely.)

1) Nominations change. There's one big thing that changes the moment Republicans win Senate: nominations. "We would have substantially lessened productivity on nominations, which on the judicial front has actually been one of the unsung success stories of this Congress," says a senior Democratic aide. Since Reid's filibuster reforms, Democrats have been able to confirm executive-branch appointees and non-Supreme Court judges with 51 votes, and so they've gotten a lot of nominees through. That would end. And if there's a Supreme Court vacancy Republicans would have the power to block any nominees Obama offers.

To Republicans, forcing Obama to rely on the veto rather than Reid is a big deal

2) Lawmaking wouldn't. Neither side expects legislative productivity to budge much. A Republican takeover wouldn't end legislative gridlock so much as it would move the chokepoint. "The focus for dysfunction would shift from the Senate blocking bad Republican ideas to the President's veto blocking bad ideas, but bad ideas would nonetheless be blocked," says the Democratic aide. If Republicans take the Senate, some ideas will still fall to Democratic filibusters, but more will make it to Obama's desk. He'll have to actually veto things bills like the Ryan budget rather than simply letting them die through Senate inaction.

3) The White House can't hide behind Reid. To Republicans, forcing Obama to rely on the veto rather than Reid is a big deal. There's a "political effect of Obama being forced to show what he's for and what he's against," says one senior Republican Senate aide. "It will be interesting to see how he responds to a Republican effort to roll back regulations or to repeal the parts of Obamacare that members of both parties oppose. Would he agree to some of these things?" 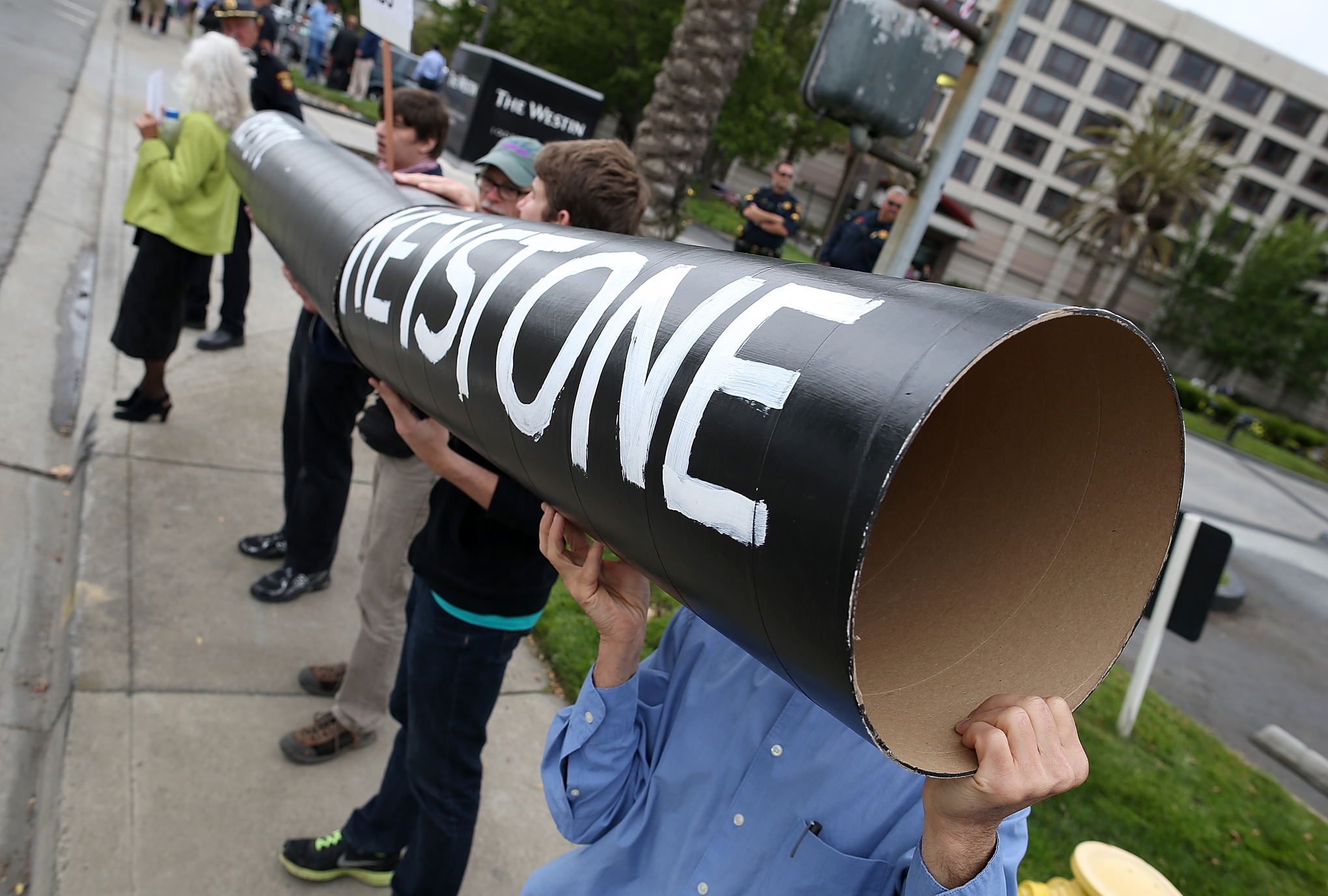 It would be bigger if they actually built it. (Photo by Justin Sullivan/Getty Images)

4) The Keystone XL pipeline might pass. There's one policy that Democrats think might actually pass into law if Reid no longer has the power to control the floor: the Keystone XL pipeline. Enough Democrats support it that if Republicans bring it to the floor in a reasonable way they'll win the vote — and it's not clear Obama will fight with a veto. "People are fed up on Keystone," says an aide to a moderate Democratic senator. "I don't know how Keystone isn't just approved if Republicans take over."

5) Democrats may not be a minority for long. Democrats don't want to lose the Senate. But they're not as worried about it as you might imagine. The reason, mainly, is that they think they'll win it right back. The 2014 map heavily favors Republicans: 21 Democratic seats are up, but only 15 Republican ones. But the 2016 map is even more favorable to the Democrats: as of now, they'll be defending 10 seats to the GOP's 24, and doing it amid the more favorable demographics of a presidential election.

"I think there's a depth people didn't know we could sink to."

6) Republicans will be facing a lot of primary challenges. Some Republican incumbents won't run for reelection, but most will — and that means much of McConnell's caucus will be worrying about a primary challenge. And if there's one thing Senate Republicans learned from Bob Bennett, Dick Lugar, and Mike Castle, it's that you don't want a reputation for working with Democrats if you're facing a primary anytime soon. "It's a very low bar to be more productive than this Senate," says one Democratic staffer. "But it will be stunning how much lower we can go. I think there's a depth people didn't know we could sink to."

7) Will McConnell run a more open Senate? Senate Republican's biggest complaint with Reid's management of the Senate is he doesn't run an open amendment process. Democrats think this basically ridiculous: the Senate, they say, has never routinely run truly open amendment processes, as they're too unwieldy. But Democrats wonder whether McConnell will try it if he takes over. Republican staffers believe he will — and that it could change the Senate much for the better. "Re-establishing the committee process and re-opening the floor to amendments on both sides would, I think, go a long way toward alleviating some of the tensions that have built up over here," says the senior Republican aide. "There's a pent-up desire on both sides to legislate." 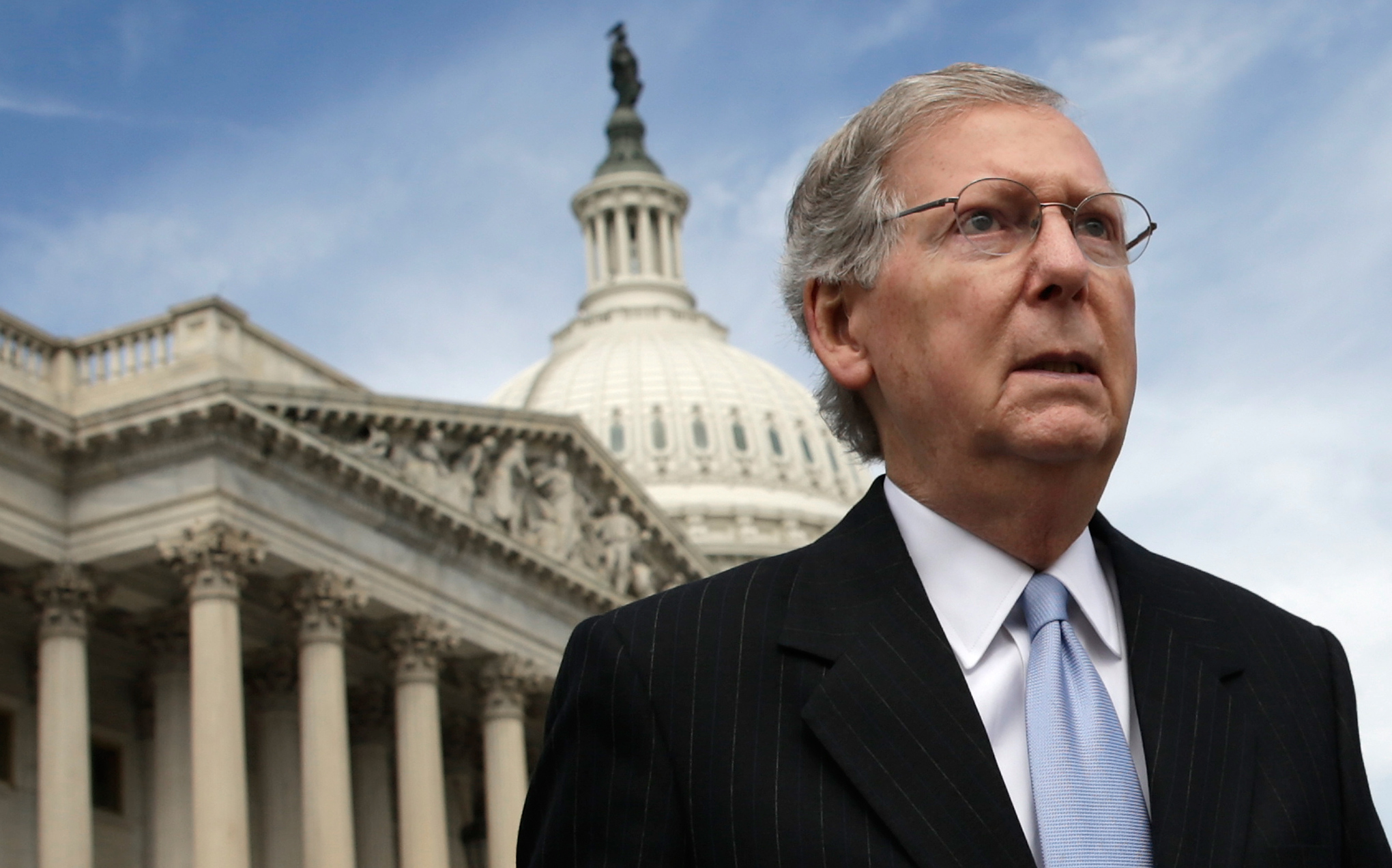 What kind of Senate would Mitch McConnell run? (Photo by Win McNamee/Getty Images)

8) Democrats doubt it. Democratic staffers are more skeptical. "The interesting thing would be whether the Senate Republicans follow through on their professed desire for open amendments (which we would use at least as well as they have to highlight contrasts) or revert to their usual form in past episodes of claiming the majority and act in a vigorously pro-majoritarian way, likely using budget reconciliation to force confrontation over gutting Obamacare," says the senior Democratic aide. "My money's on the latter."

9) Could the Senate finally revolt? Something both sides bring up often is that rank-and-file senators hate the way the modern Senate works. They believe they were sent to Washington to solve the nation's problems. They're embarrassed by how little gets done. They know that their names aren't going to be etched into the history books — at least not positively — unless something changes. And so there is the dream now, as there was in 2012, that after the election, the dam will somehow break, and the Senate will become the Senate again. I'm skeptical of this hope: senators may loathe the condition of the modern Senate, but they're the ones responsible, and they've charted this course as a rational response to their political incentives and policy commitments. Still, it's worth mentioning.

10) Of course, polarization might just get worse. Political scientist Alan Abramowitz put it flatly in a discussion with the Washington Post's Greg Sargent: "We'll have a Republican caucus that is more conservative than it is now, and a Democratic caucus that is more liberal than it is now, [because] you're subtracting moderates from the Democratic caucus, and adding very conservative Republicans to the GOP caucus." In other words, the Senate will get more polarized, and more dysfunctional. And, as mentioned above, a huge number of Senate Republicans will be facing primary challenges before the 2016 election.

There's an old joke my grandfather used to tell. A man goes into his doctor and says "Doctor, everything has gone wrong! I'm sick. I lost my job. My wife has left me. I don't know what to do!"

His doctor replies, "Smile. At least things can't get worse."

So the guys smiles. And then things got worse.