When NBC's Meet the Press over the weekend held a roundtable about the New York Times Editorial Board's decision to endorse marijuana legalization, participants seemed to take the issue very lightly — regularly making jokes between a few serious policy points.

The chuckles are typical in conversations about marijuana policy. At one of his first town halls, President Barack Obama joked, "There was one question that was voted on that ranked fairly high: that was whether legalizing marijuana would improve the economy and job creation. And I don't know what this says about the online audience." In June, former President Bill Clinton asked, "Rocky Mountain high?" to chuckles before going into an answer that seemed to support state-based reform. Hillary Clinton got in some jokes about marijuana before answering a similar question at a CNN-hosted town hall in the spring.

In some cases, these quips help lighten a conversation about drugs that many Americans, especially parents, are simply uncomfortable with. But the jokes also reflect a problem in discussions about US drug policy: there's a very serious disconnect about what marijuana legalization means for Americans.

It's easy to joke about marijuana policy when the idea of legalization feels more like a new freedom, which might be the case for whiter and wealthier populations. As someone from a privileged background who socializes with people from similarly privileged backgrounds, my social circle's conversations about pot legalization largely revolve around how cool and liberating it might be to buy pot legally. What we rarely mention in these conversations: race, the criminal justice system, and the fear of getting arrested if someone were to buy pot illegally.

black people are 3.7 times more likely to get arrested for pot possession

But for minority, poorer populations, marijuana policy is much closer to a civil rights issue. Marijuana isn't just a drug that they would like to be able to use and carry out in the open. Marijuana criminalization has historically been used to harass and arrest people in minority and poor communities at hugely disproportionate rates. 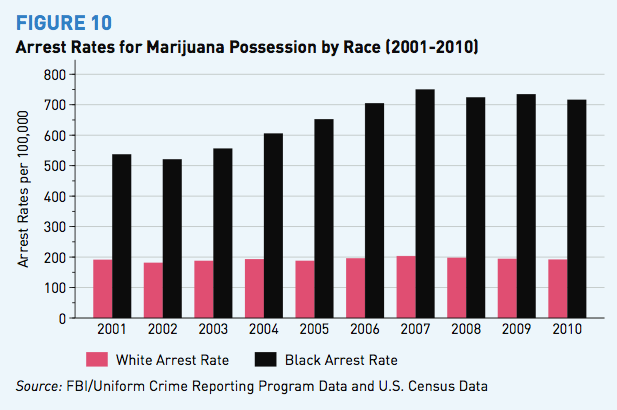 Black and white people use pot at similar rates, but black people are much more likely to be arrested for it. (ACLU)

These racially disproportionate marijuana-related arrest rates remained in some states even after decriminalization, when criminal penalties are removed but the drug remains technically illegal.

New York, for instance, decriminalized marijuana in 1977, but as of 2012 had one of the highest arrest rates for pot possession. The problem: New York law allows arrests for marijuana that's within public view. Police officers in New York City regularly used this exception to arrest people, particularly minorities, by getting them to empty their pockets during stop-and-frisk searches and expose marijuana that would otherwise have remained hidden. (According to a report from the New York City Public Advocate's office, the vast majority of stop-and-frisk searches in 2012 — roughly 84 percent — involved black or Hispanic people.)

There is a legitimate debate to be had about whether these arrests focus on drug traffickers instead of users, highlight broader problems in the war on drugs and the criminal justice system, or signify higher crime rates among minority communities.

for minority, poorer populations, marijuana policy is much closer to a civil rights issue

But Meet the Press didn't even give that debate a chance. The roundtable instead focused on the health effects and whether legalization increases pot use. These are very important issues that need to be discussed, but they're also the kinds of issues more privileged Americans can focus on because they just don't see the skewed effects of criminalization in their everyday lives.

Just imagine, for example, if the couple of minutes the roundtable spent on jokes were instead spent discussing racially uneven drug policy enforcement. As Ryan Cooper of the Week points out, this would be much more valuable to Meet the Press' audience. Because for a large chunk of the US population, marijuana policy is simply no joking matter.

To learn more about marijuana legalization, read our full explainer and watch the video below: