Share All sharing options for: The Gaza war, mapped

It may be hard to follow what's happening in Gaza just by reading about it abstractly. But this excellent map of the conflict, put together by the Israeli newspaper Ha'aretz, really helps clear up what's going happening on the ground. (The map is excerpted from a larger, terrific infographic you can view here.)

Ha'aretz's goal is to map out what they saw as the most important incidents and battle lines from the first three weeks of the conflict — that's July 8th through Tuesday the 29th. The map notes major battle incidents (the yellow explosions), major population centers in Gaza (the green and red blocks), tunnels out of Gaza into Israel (the black lines), and Israeli towns/cities (the black and white circles). 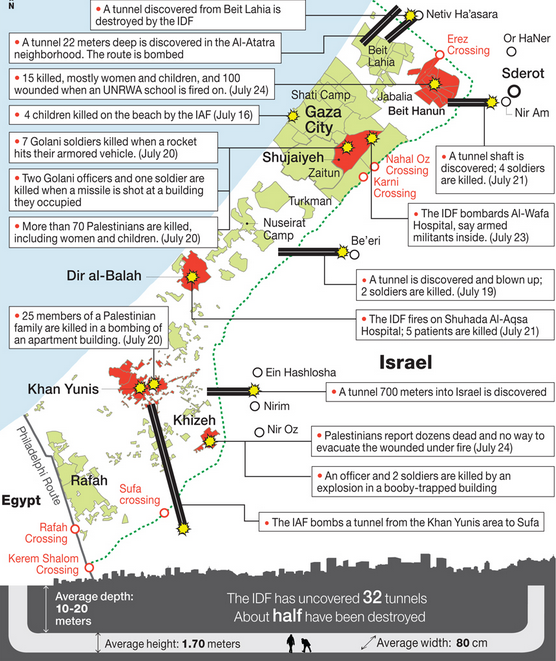 Three really important lessons pop out from this map:

1) Many tunnels exit near Israeli towns and kibbutzim. Tracing the tunnel lines out, you see a lot of them near small Israeli communities — kibbutzim like Be'Eri and Nir Am, and the Ne'tiv Ha'asara moshav. That's a big part of why Israel believes that the tunnels are designed to allow for Hamas incursions into these civilian areas, and thus must be destroyed for basic national security.

2) The Israeli Defense Forces hit a number of seemingly civilian targets. Looking at the battle sites where large numbers of Palestinians have died, you notice they're often killed in apartment complexes, hospitals, and sometimes even UN displaced person camps (six such camps have been hit). That's partially because Hamas deliberately places its weapon emplacements in such areas, and partially the simple, inescapable nature of urban warfare. Even if the IDF is as discriminating as it says it is, it's clearly not perfect.

3) At least one tunnel extends into the heart of Gaza. Look at the big tunnel in the south, the longest one on the map. It comes out near Khan Younis, the second largest city in Gaza. The tunnels are concealed on the Israeli side, and the IDF is intent on making sure they're destroyed. As the Ha'aretz map notes at the bottom, they've only yet demolished half of the ones they've found.

When you put all of these things together, you get a clear picture of why this conflict has been so deadly. The Israeli military believes Hamas is trying to infiltrate their territory in order to attack towns. They want to make sure every tunnel, including ones that begin near heavily populated areas, is destroyed. Yet it's impossible for the Israeli military to do that without inevitably hitting Palestinian civilian structures.