GDP figures can be misleading. Look at final sales instead.

Share All sharing options for: GDP figures can be misleading. Look at final sales instead.

Each quarter, we obsess over whether the headline GDP figure says good or bad things about the economy. However, there always seems to be a caveat to the report, and that caveat is inventories — goods a company has on hand but hasn't yet sold to customers.

Business spending on inventories is one of the key components of GDP growth each quarter, but it also can be misleading. As Business Insider's Rob Wile writes, a positive swing in inventories this quarter, as businesses build up their stores of products, can set the stage for a decline next quarter, as businesses use up those stores. The reverse is true, as well; it's one of the reasons economists were generally positive going into today's report, as first-quarter inventories were negative.

For a look at this, check out this chart put together by ZeroHedge. It shows quarterly GDP growth, broken down by the various components that go into adding up GDP: 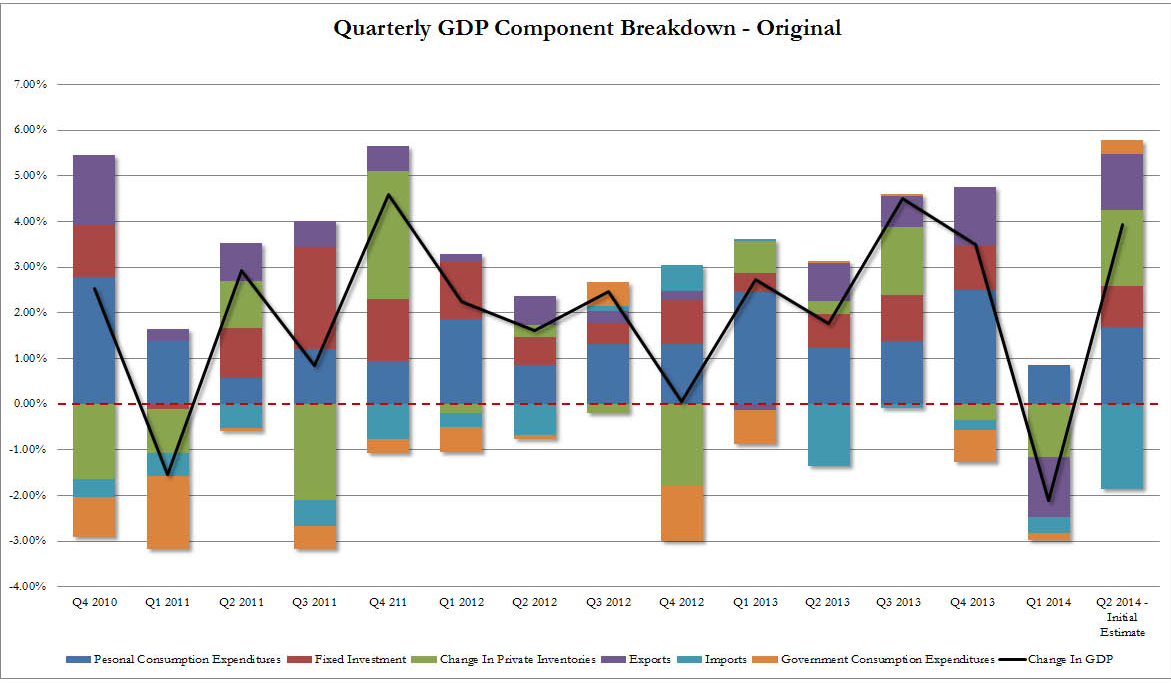 Take a look at each of those colors, and you'll see that the green (changes in inventory investment) is the most all-over-the-map. Red (fixed investment) tends to be positive. Darker blue (consumer spending) also tends to be positive. Government spending (orange) can be up or down, but has in recent quarters tended to be modest in size and more often than not negative.

But inventories regularly swing up, then down, then up, then down, and the size change can be big. And it's for this reason that there's a better way to look at GDP each quarter. The BEA releases a figure called "real final sales," and it simply looks at GDP without those swings in inventories. By that measure, GDP only fell at an annual rate of 1 percent (not 2.1 percent) in the first quarter, and grew by 2.3 percent (not 4.0 percent) in the second. Arguably, this is a more stable measure of GDP.

There are other ways of tweaking the GDP picture as well. The White House in its analysis of second-quarter GDP emphasizes real private domestic final purchases, which takes out not only inventories but net exports. 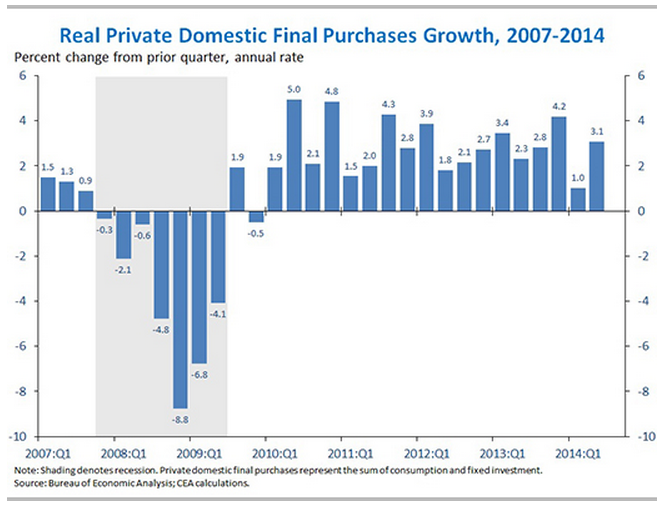 This is perhaps an even more stable indicator and also a better read on domestic demand for domestic goods. Then again, any sort of tweak you make to GDP pulls you further away from a full measure of goods and services produced by the economy.