Share All sharing options for: Violence in Libya is the worst it’s been since the NATO intervention

On Monday, a battle over the airport near Tripoli, Libya's capital, ignited an "out of control" blaze that shut down one of the most important routes out of the country. On Tuesday, militias seized the largest government special forces base in the eastern city of Benghazi. The United States has evacuated its embassy in Tripoli. It's the worst fighting in Libya since the 2011 war to oust dictator Muammer Qaddafi.

Why is Libya in such shambles? Might the chaos stop anytime soon? Here are a few preliminary answers.

There's a brutal cycle between weak government and militia problems 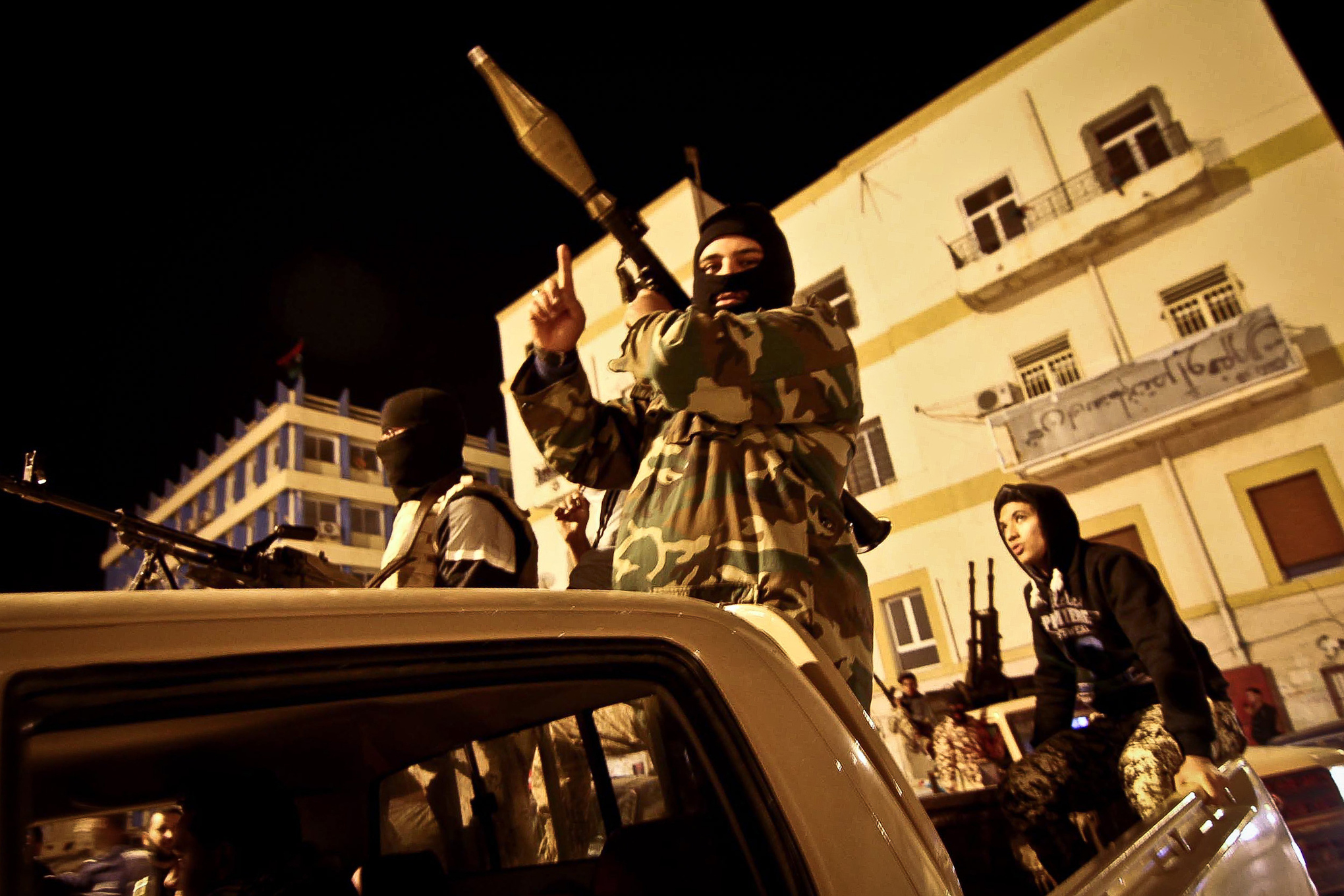 Libya's current problems date back to the collapse of the Qaddafi government, but in many ways precede it. The basic problem is that the Libyan state has never been all that strong. As Joshua Keating explained back in May, the dictator kept his military weak by design: he was more concerned about a military coup than external uprisings. Libyan political institutions, designed according to Qaddafi's idiosyncratic Green Book,  were never held together by a coherent bureaucracy or consistent lines of authority. Qaddafi made the major decisions and subordinates had to figure out a ramshackle way to implement them.

Basically, Libya was in shambles before the anti-Qaddafi uprising began, which helped the rebellion to get off the ground. But after the NATO intervention swept the rebels to victory in August 2011, even the minimal political order that held under Qaddafi collapsed. The Libyan rebel coalition, always a disparate collection of fighters, dissolved into component militias. There was no effective government in place.

This created a devastating cycle in Libya. Without a stable security situation, the nominal Libyan government couldn't set up the institutions — police, social services, control over the all-important oil industry, binding court systems, etc. — necessary to establish a working state. Without a nominal state, militias had to rely on themselves to provide security. They had zero incentive to give up arms.

Continued clashes between rival militias made it hard for the government to govern, and lack of governance made militia violence more likely. This basic dynamic has been Libya's core problem since Qaddafi fell, and is at the heart of the recent spike in violence.

The violence is getting worse, and it's not obvious how to stop it 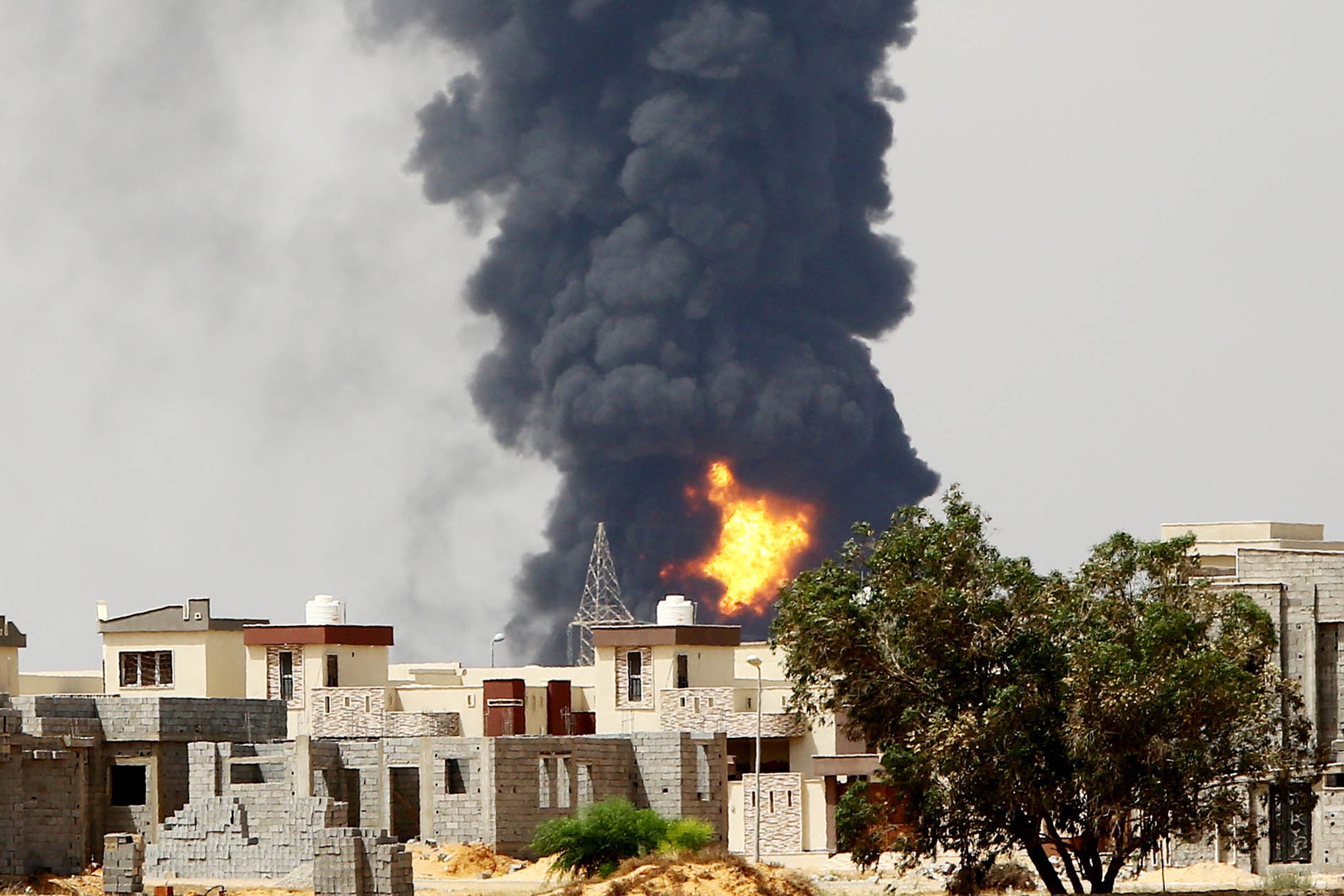 Libyan oil ignited during the fighting near the Tripoli airport in July. Mahmud Turkia/AFP/Getty Images

It's hard to come by reliable data on deaths in Libya. The group Libya Body Count, relying on press and social media accounts, says that in 2014,  686 people have died in violent incidents, about of half of which in July. The group's methodology isn't clear, however, so this is at best a provisional count.

Regardless, it's clear the situation is getting more deadly. The British risk consultancy group Maplecroft's tally suggest "terrorist incidents" doubled in Libya in 2013. Maplecroft's Terrorism and Security Dashboard ranks Libya the 10th riskiest country in the world. For perspective, that's only three slots below Syria.

Some of the recent spike has to do with a new offensive in eastern Libya. General Khalifa Hifter, a former Qaddafi general who defected in the mid-80s and then joined the Libyan rebel army in 2011, formed what's best described as an anti-militia militia. Hifter's offensive, taking place almost exclusively in Benghazi, specifically targets Islamist militias like the powerful, hardline Ansar al-Sharia.

But even though they're fighting on the same side against the Islamists, Hifter isn't part of the government. He claims to represent the "Supreme Council of the Armed Forces" in Libya, a clear reference to the military junta that overthrew Egypt's civilian government in 2013. That suggests Hifter wants to set up a military government rather than the democracy that the Libyan constitution-drafting process is trying to set up. The New York Times reports that, by late May alone, the fighting set off by his campaign had claimed at least 100 lives.

Hifter's campaign hasn't knocked out the Islamists (for a detailed account of the fighting, read this). It's not obvious what will.