5 reasons we can't predict the future of health costs

Share All sharing options for: 5 reasons we can't predict the future of health costs

It is, without a doubt, one of the most important questions for federal budget policy: how quickly will health spending grow?

Really fast health care spending means more tax dollars going towards Medicare and Medicaid — and less money for everything else. But slow growth, the type the country has seen for the last four years, could hugely alleviate spending pressures.

If the recent slowdown persists, it could change everything we think we know about the nation's deficit — but whether it will last is also vexingly difficult to figure out.

How much the country spends of health care is influenced by a variety of factors. At a symposium hosted by the Altarum Institute earlier this month, Paul Ginsburg, a health economist at the University of Southern California, highlighted some issues he thinks are particularly challenging to predict when it comes to forecasting health spending over the course of a decade.

1) What's happening with the overall economy?

Part of what determines how quickly health care spending grows is the health of the overall economy. When the economy is doing well, people spend more on health care. Economists quibble over how much the recent recession is behind the latest slowdown, but there's a general consensus that it has played a role.

2) Why has technological change slowed?

According to recent research by noted health economists Jonathan Skinner, Jonathan Holmes, and Amitabh Chandra, the country is adopting newer, expensive technology more slowly than it used to. Spending growth on prescription medications in particular has abated as generic versions become more available and more popular.

It's not entirely clear why there has been a slower rate of technological change overall, or whether that trend will continue. It's possible that today's consumers simply don't want new technologies that don't offer substantial benefits for their costs, which would be a good thing. There might be more demand for technology that actually saves money — another development that would be great for health care. Alternatively, this could be a blip in the research and development cycle. We just don't know.

3) Will payment reforms take hold more broadly and be successful?

Obamacare has ushered in a wave of changes to how Medicare pays doctors; the new Medicare Trustees' report counts no fewer than 165 Medicare reform programs in the health overhaul.

"PROVIDER PARTICIPATION IS NOT BECAUSE OF A STRONG BUSINESS CASE, BUT BECAUSE THIS MAY BE THE FUTURE."

The federal government is limited in the ways it can promote these types of changes to how insurers pay for medical services; they only control the purse for Medicare and Medicaid. So its not clear whether other parts of the health care system will adopt these changes — or if they'll even work in Medicare.

Still, those payment reforms seem to be diffusing to some private insurers. According to a recent report from Blue Cross and Blue Shield, one out of every five dollars spent by their plans go toward "value-based" programs that make doctors accountable for quality, health outcomes, and costs.

"My sense is that a lot of the provider participation in both Medicare and privately-insured plans is not because there's a strong business case for participation, but because of the possibility that this may be the future," Ginsburg told the audience. "Ultimately, of course, the biggest uncertainty is how well the payment approaches will work."

4) What will happen to out-of-pocket costs over time?

cost-sharing has helped hold down spending

Over the last few decades, there has been a shift toward patients paying for more of their own care. The idea is that when people have higher cost-sharing — higher deductibles and copays — they will make more careful choices about when and how often to seek medical care, which should reduce some unnecessary doctor's visits.

Economists generally agree that a shift toward higher patient cost-sharing has helped hold down spending growth over the last few years. "High-deductible" insurance plans, which were rare just a decade ago, now make up one-fifth of all employer-sponsored insurance.

This Kaiser Family Foundation chart shows how quickly plans with deductibles of $1,000 or more (for a single person) have grown. That growth has been especially rapid among smaller employers. 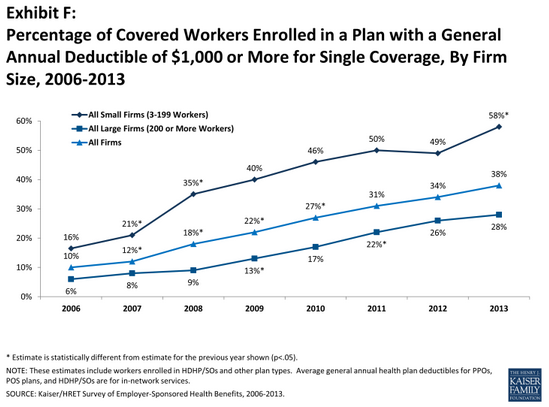 Ginsburg keyed in on the "Cadillac tax" as the policy on which the future of patient cost-sharing could balance. That part of Obamacare is scheduled to go into effect in 2018, and taxes insurance plans that have premiums exceed a certain annual cost threshold ($10,200 for an individuals). Generally speaking, lower premiums mean higher cost-sharing at point of service.

Under Obamacare, many insurance plans purchased through the new state exchanges have "narrow networks" — a limited menu of doctors and providers that enrollees can choose from when they want medical care. This is an important cost-control tool, because insurers can negotiate lower prices by promising doctors and hospitals a constant flow of patients.

But if the networks are too small, patients could run into access issues. The government is investigating concerns among patients and patient advocates about whether Obamacare's narrow networks have enough doctors — especially enough doctors in specialized fields — to meet demand. While it's important to ensure timely access to care, there is a worry that new regulation might overcorrect the problem, undermining network innovation as a tool used to reduce spending.