Share All sharing options for: Why 70% of the people killed in Israel-Gaza violence are innocent Palestinian civilians

A lot of this has to with the big picture of how the conflict is structured (lots more on that here). But more immediately, at the ground level, there are two common explanations you hear for this, each putting the onus for the deaths predominantly on one side.

On the one hand, Hamas appears to be at best indifferent to the fact that, by firing rockets from heavily civilian areas, it knowingly invites or even desires Israeli strikes that will kill civilians. (Hamas is frequently accused of using civilians as human shields for this reason.) On the other, the plain truth is that Israeli bombs are causing most of the civilian deaths. While Israel has many guidelines to prevent civilian casualties, it also uses overwhelming force in civilian areas and makes strategic and tactical choices that dramatically and foreseeably raise the rate of civilian deaths, and has continued making these choices even as hundreds of Palestinian civilians have died.

Ultimately, both are deeply negligent in their responsibilities to avoid causing Palestinian civilian casualties, but in very different ways to very different ends, and there's a lot more complexity to both ends of this than you might think.

Does Hamas really use human shields? Not legally speaking, but the effect of their tactics is similar 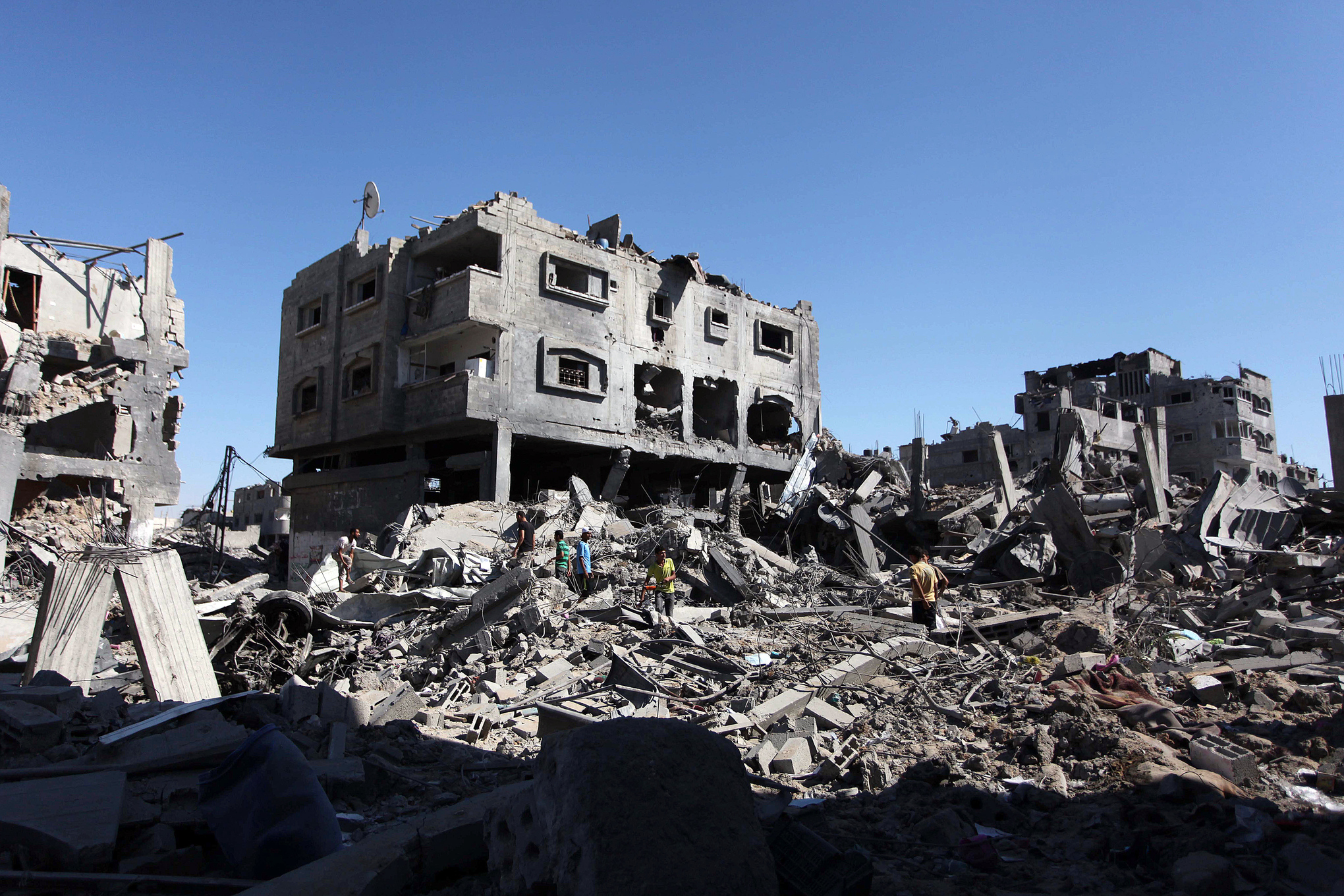 The truth to this is not simple; while Hamas does not appear to force civilians into the line of fire, which is the legal definition of human shields, the group is extremely cavalier about indirectly causing Palestinian casualties by firing from civilian neighborhoods and storing rockets in civilian buildings. This is a real, serious form of culpability.

Observers on the ground tend to say that Hamas's actions do not meet the legal definition of human shields. The BBC's Jeremy Bowen recently wrote, "I saw no evidence during my week in Gaza of Israel's accusation that Hamas uses Palestinians as human shields." The New York Times' Anne Barnard and Jodi Rudoren wrote, "There is no evidence that Hamas and other militants force civilians to stay in areas that are under attack — the legal definition of a human shield under international law."

Amnesty International, which has a number of people on the ground in Gaza and consistently condemns Israeli and Palestinian abuses alike, announced recently on its site that it does not see proof of Hamas using human shield — but they added an important asterisk.

"Palestinian armed groups have stored munitions in and fired indiscriminate rockets from residential areas in the Gaza Strip," an Amnesty report noted recently. The groups have also "reportedly urged residents in some areas of the Gaza Strip not to leave their homes" after Israel had warned it would attack the area, all of which have the effect of putting Palestinians at risk in the fighting.

An important secondary question, though, is whether they do this out of a deliberate desire to hide behind (or even provoke the bombing of) Palestinian civilians, or out of simple disregard for putting those civilians at risk.

Some observers argue that Hamas is more than just indifferent to civilian deaths, and may be doing something even worse than hiding behind them: that the group actively wants Israel to kill Palestinian civilians so that Hamas can rally world opinion against Israel.

that lack of regard for the hundreds of Palestinian civilians killed, the apparent sense that their lives only matter at the moment of their death so that it can be blamed on one side or another, is perhaps the most fundamental truth of the Israel-Gaza war

Some of these observers have met and interviewed Hamas leaders, some have not.

The Atlantic's Jeffrey Goldberg, who has interviewed Hamas members, wrote that the group "is trying to get Israel to kill as many Palestinians as possible" because "dead Palestinians represent a crucial propaganda victory for the nihilists of Hamas." While that is not exactly akin to using unwilling human shields, if true, the effect would be in many ways similar.

The Globe and Mail's Margaret Wente wrote, "Hamas openly encourages civilians to act as human shields," pointing out that a Hamas spokesman had encouraged Gazans to "defend their rights and their homes with their bare chests and their blood." While again this is not actually the same as human shields, it is another form of culpability.

While it is within the realm of possibility that Hamas at some level desires the deaths of Palestinian civilians, proving that the group is acting on this requires a lot of extrapolation and supposition about the internal motivations of Hamas officials. Speaking for myself, I will not pretend to possess special insight into the minds of Hamas leaders.

What can be proven is that Hamas makes tactical choices, particularly firing from dense civilian areas, that increase the odds that Palestinian civilians will be killed. Hamas could save lives by firing rockets from less crowded areas of Gaza City or storing those rockets in a building that is not a school. But it doesn't. Even if this is "only" coldblooded indifference, which is the most generous possible reading, this is surely a form of culpability. 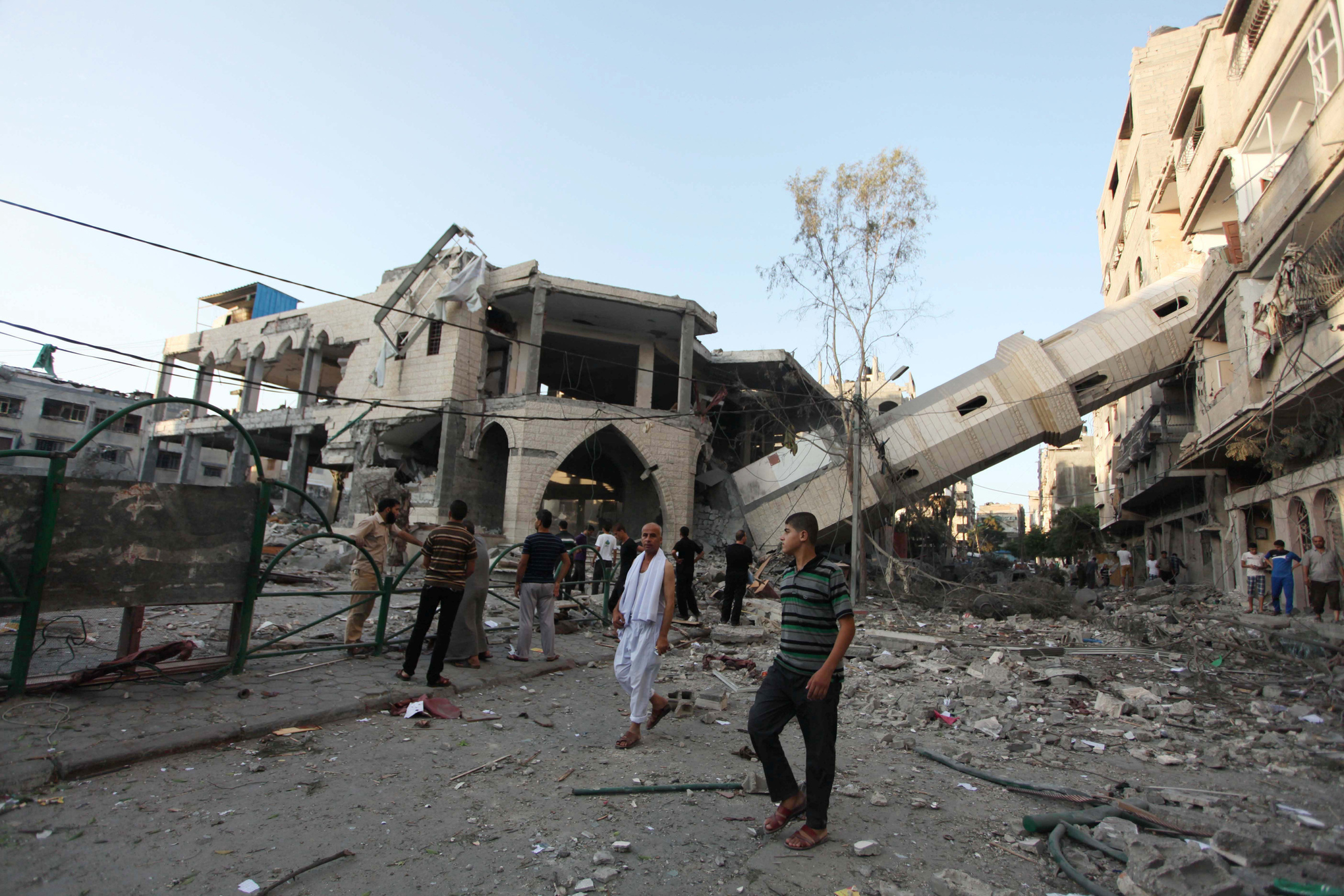 Israel and its defenders further point out that the Israeli military does take measures to reduce Palestinian civilian deaths, such as dropping fliers or even calling people whose homes are about to be bombed.

That has not prevented Israel's campaign in Gaza from foreseeably killing an overwhelming number of innocent Palestinian civilians. Israel has bombed a number of civilian structures, such as a mosque and a school for the disabled, in attacks that kill civilians. Israel defends such attacks as necessary to target militants and rockets tucked within the civilians. Israel does not claim that it was unaware that mosques and schools might contain civilians.

On the one hand, surely Israel is responsible for the bombs it drops in areas it knows to be civilian, especially given its overwhelming military superiority in the conflict. On the other, Israel and its defenders argue that Hamas forces it launch these overwhelming campaigns in civilian areas; this is not totally unreasonably, due to the Hamas tactics explained above.

But Israel bears some responsibility for this end too. Part of this comes from an unresolved contradiction in Israeli policy, which is both to avoid civilian causalities and to punish Hamas with overwhelming force in a way that will deter it from attacking Israel. The Israeli Defense Forces "gets and gives somewhat contradictory orders on this," the Brookings Institution's Daniel Byman wrote recently:

"There is both a strong and formal "when possible, try to avoid killing civilians" order, but also a message of "show them we mean business" and, of course, "protect the troops at all cost" (which can mean you bring down the building rather than try to clear it room by room to avoid civilians). So I think Israel often tries to do both proportionality and deterrence, and as a result both suffer.

Israel is surely aware of this contradictory policy, which was also true during the 2009 Israel-Gaza war that also killed many civilians. And Israel is aware of the large number of Palestinian civilian deaths that this strategic contradiction helps to cause — indeed, Israel is highly sensitive to international opprobrium over it. The fact that Israel has still failed to resolve this contradiction, has still failed to re-align its larger strategy in a way that does not compel it (from Israel's view) to launch attacks that will kill hundreds of Palestinian civilians is a real, significant form of responsibility.

The Israeli argument is often to point out that, because Hamas embeds itself among Palestinian civilian communities, Israel is forced into a choice between bombing those communities or sitting passively as Hamas flings rockets into Israeli territory. It is true that no democratically elected government could choose the latter, declining to defend its own citizens, and expect to be reelected. Nor would any state ever abandon its need to defend itself; this is why US leaders so often invoke Israel's right to self-defense. This is all very true.

'Israel often tries to do both proportionality and deterrence, and as a result both suffer'

But there are two reasons, beyond even the strictures of international law, that this does not absolve Israel of its responsibilities to avoid killing civilians. First, it ignores that Israel has failed, since at least the 2009 war, to change its larger Gaza strategy so that these civilian-casualty-heavy wars would not so foreseeably and frequently recur (yes, Hamas also bears responsibility for this).

Second, the Israeli argument presents a false binary choice between passively accepting Hamas's rocket attacks versus bombing Gaza civilian neighborhoods into the stone age. Given Israel's overwhelming military superiority and its vastly lower exposure to fatalities (more than 100 Palestinian civilians have been killed for every one Israeli civilian), surely it could afford to be less enthusiastic in its utter destruction of civilian-heavy areas.

It may well be the case that sometimes Israel is forced into an impossible choice between ignoring rocket attacks and bombing a civilian structure, in which it is at least defensible for Israel to privilege its self-defense and bomb the building. But in a larger view it is very difficult to imagine that a Palestinian threat that has killed seven Israeli civilians is dire enough to justify attacks that have killed 815 Palestinian civilians.

One side's irresponsibility toward civilian deaths does not absolve the other's 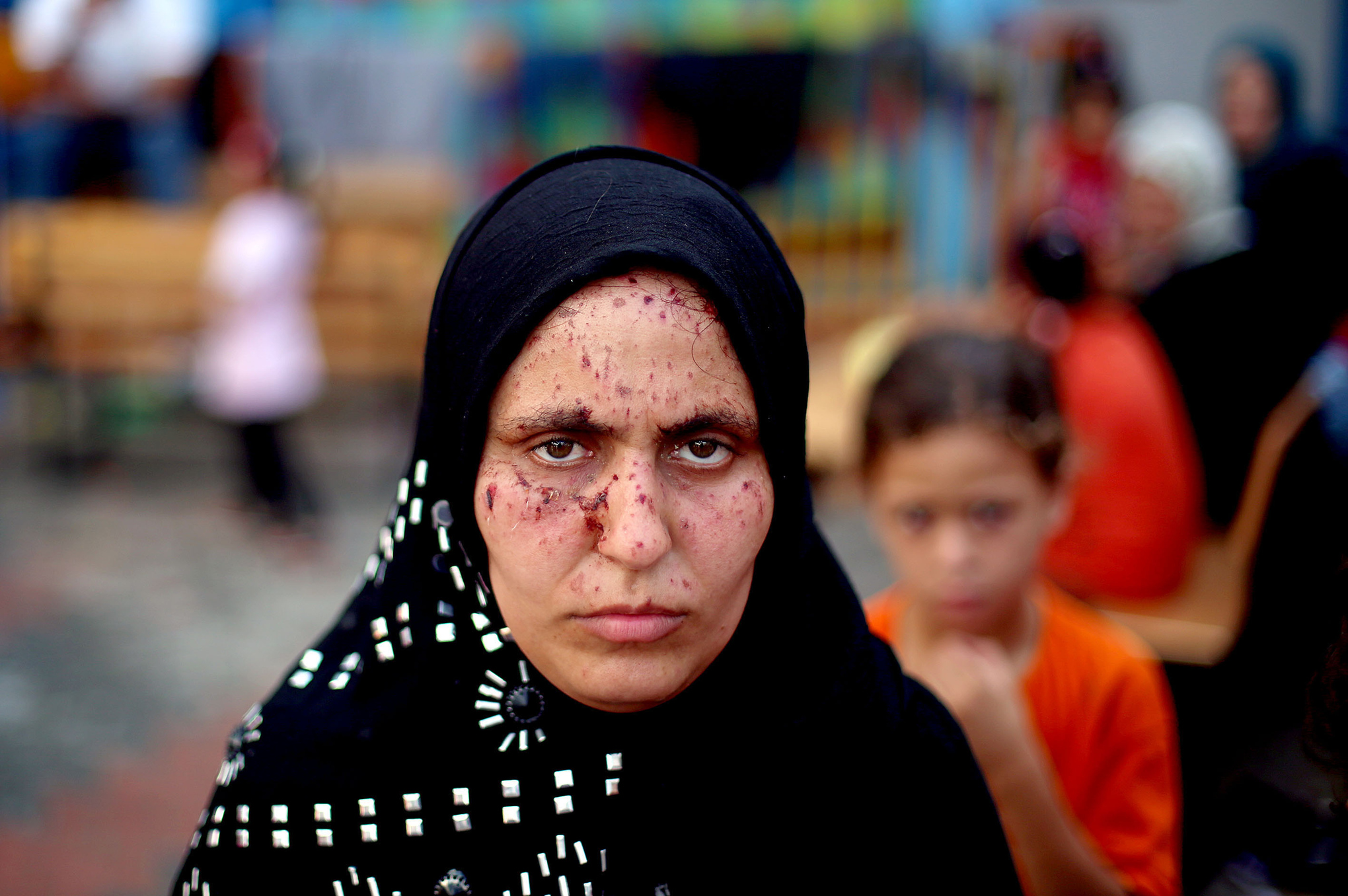 Defenders of Israel often argue that, if Hamas is deliberately putting Palestinian civilians into harms way, while Israel at least makes an effort to reduce Palestinian deaths, then it's not fair to criticize both as if they are equivalent. Clearly Israel, they say, is displaying a greater degree of responsibility.

Meanwhile, many critics of Israel point out that Israel is the one dropping the bombs that have killed such an overwhelming share of civilians, and it is the one that has decided to respond with such overwhelming force. So isn't it ultimately Israel's responsibility?

This fundamentally misses the point; both sides independently bear responsibility for the degree to which their tactics lead to civilian deaths. If one side abdicates that responsibility then this does not absolve the other. Both sides, by treating moral responsibility as zero-sum, are giving themselves permission to overlook their own role in driving up the civilian casualty rate, and thus continuing the killing.

More symbolically, treating moral responsibility as zero-sum — Hamas is free of blame because Israel bombs too much; Israel is free of blame because Hamas embeds itself among civilians — assumes that Palestinian civilian deaths only matter for the degree to which they make one side look better or worse. And that lack of regard for the hundreds of Palestinian civilians killed, the apparent sense that their lives only matter at the moment of their death so that it can be blamed on one side or another, is perhaps the most fundamental truth of the Israel-Gaza war.