Oklahoma has unexpectedly become the earthquake capital of the United States — with some 240 small earthquakes magnitude 3.0 or more this year. That's about twice as many as California has gotten.

In a new study in Science, researchers say they've pinpointed a likely culprit — disposal wells that are used to bury massive amounts of wastewater from oil and gas operations.

Oklahoma's oil and gas industry has been booming since 2008, thanks to various advanced techniques such as "dewatering" operations and hydraulic fracturing. But these activities can create millions of barrels of wastewater that is difficult to treat and often gets injected back underground into disposal wells.

A smaller number of Oklahoma's injection wells, the Science study found, seem to be putting pressure on faults and triggering seismic activity — often as far as 20 miles away. In fact, just four injection wells associated with a dewatering operation near Oklahoma City were likely responsible for one-fifth of the region's earthquakes since 2008.

How wastewater disposal can cause earthquakes

Wastewater can come from several sources. Oklahoma has a number of "dewatering" operations that separate crude oil from brine — a process that helps salvage once-unusable oil. The leftover water often gets injected back underground into disposal wells so that it doesn't contaminate local freshwater supplies.

Wastewater can come from several sources — not just fracking

Meanwhile, the process of hydraulic fracturing, or "fracking," involves injecting water, chemicals, and sand underground at high pressures to crack open shale rock and extract oil and gas. Fracking itself doesn't seem to be causing earthquakes. But after the well is fracked, the wastewater needs to be pumped out and disposed. Since it's laced with chemicals and difficult to treat, companies will often pump the wastewater back underground into separate disposal wells.

Wastewater disposal can come with a catch, however: Injecting all that water back underground both pushes the crust in the region downward and increases pressure in cracks along the faults. That makes the faults more prone to slippages and earthquakes.

Most of Oklahoma's 9,000 wastewater wells don't seem to be causing any problems. But the Science study, led by Katie Keranen of Cornell, suggested that a handful of high-activity wells were likely responsible for the sharp uptick in seismic activity in central Oklahoma since 2008: 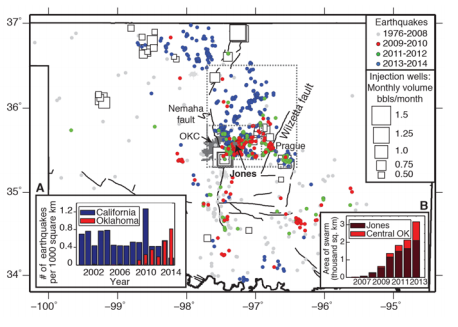 Earthquakes in Oklahoma between 1976-2014. Earthquakes are magnitude > 1 from the NEIC catalog. Keranen et al 2014

More to the point, just four injection wells southeast of Oklahoma City may be responsible for one-fifth of the seismic activity since 2008. These wells are part of a dewatering operation owned by New Dominion and inject some 4 million barrels of wastewater underground each month.

The study also noted that pressure from the wastewater wells travel through the subsurface farther than anyone thought — with the four high-activity dewatering wells capable of triggering seismic activity in a 772 square mile vicinity.

That could explain, for instance, why the town of Jones, Oklahoma, has seen thousands of small earthquakes since 2008 despite the fact that there are no wastewater wells in the immediate vicinity.

It's worth noting that, so far, these earthquakes have been too small to do serious damage or endanger lives. Still, they have stirred up concern among some Oklahoma residents, and regulators are now considering whether additional rules may be necessary.

In June, Oklahoma enacted a new rule that will soon require oil and gas operators to report their injection volumes and pressures on a daily basis (as opposed to monthly). Last year, Oklahoma regulators ordered a disposal well in Love County to cease operations after seismologists suggested it may have been linked to a recent spate of earthquakes.

Other states are also looking at wastewater and earthquakes

Meanwhile, a separate study is currently ongoing in Colorado as to whether an injection well was causing seismic activity near Greeley. One June 25, state regulators ordered a halt to wastewater injection in the area after a 2.6 magnitude quake (which had followed a 3.4 magnitude quake in May).

Update: This story has been expanded since first published.