World map: Where you can and can't be fired for being gay

Share All sharing options for: World map: Where you can and can't be fired for being gay

The United States is largely alone among its developed peers in not providing workplace protections for gay and lesbian employees.

This map, compiled with data from the International Lesbian, Gay, Bisexual, Trans, and Intersex Association, shows that most of Europe, Canada, Australia, and various other countries prohibit workplace discrimination based on sexual orientation: 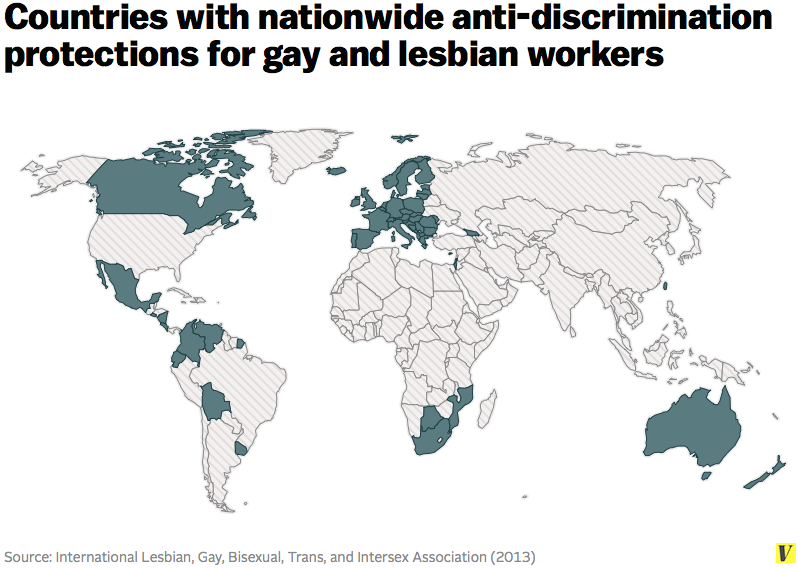 Even some developing countries appear to be ahead the US on this issue. Venezuela, for example, passed workplace protections in 1996. At the same time, it's highly questionable whether these protections are strictly enforced. As many native Venezuelans quickly note, homophobia is still a common occurrence in the Venezuelan workplace (one of the most common insults in Spanish-speaking countries — maricón — is directly insulting to gay men), and it's not uncommon for Venezuelan police to harass LGBT people.

Still, it's striking just how long ago some of America's peers put their workplace protections in place. Israel and the Netherlands, for instance, prohibited workplace discrimination against gay and lesbian employees in 1992.

More than two decades later, 29 out of 50 states in America allow employers to fire workers over their sexual orientation. With federal legislation now stalled in Congress, the Obama administration in June announced executive orders that would protect transgender federal employees (gay and lesbian federal employees are already protected) and the LGBT employees of federal contractors. There's also some debate that the Civil Rights Act of 1964 could be used to protect LGBT employees.

These kinds of protections could produce big benefits for LGBT employees. A recent study found openly LGBT job applicants have a 23 percent lower chance of getting a call back from some federal contractors, including giants like ExxonMobil and General Electric.