MAP: How every country in the world celebrates its version of July 4th

Share All sharing options for: MAP: How every country in the world celebrates its version of July 4th 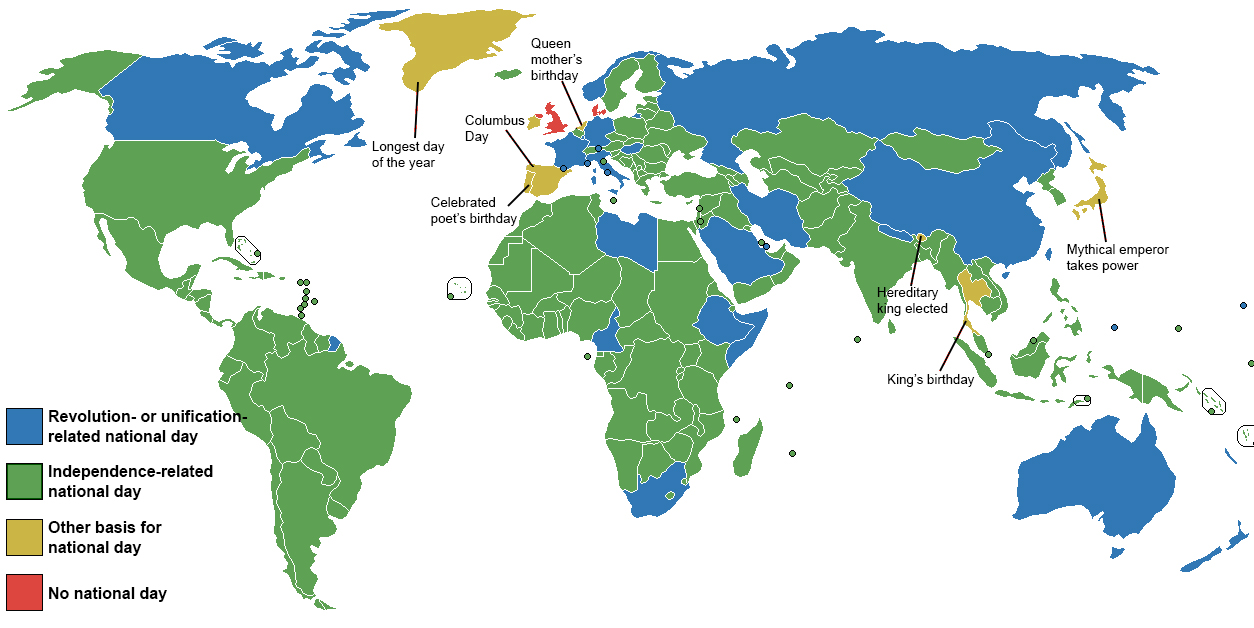 As you celebrate US Independence Day on the 4th of July, or perhaps as you celebrate France's own national day next week, Bastille Day, you may find yourself wondering how other countries mark their equivalent holidays. What are the other official national days around the world? The map up top gives you the basic answer of how every country celebrates its version of America's 4th of July (plus the only two that have no equivalent — more on them below).

It's not exactly a shock that European colonialism subjugated the vast majority of the world, but the extent of the green on this map is a reminder of just how wide European colonialism spread — and how much its legacy is remembered and still felt. In the US we've obviously reverted to mostly joking about the idea of fighting a bloody war with the British Empire, but there are lots of places where people's parents or grandparents or great-grandparents actually did fight against the British Empire, or the French or the Italian or the Portuguese. So the independence day is in many places substantially about celebrating independence as well as just the nation itself.

Like independence days, most revolution days are pretty recent

There's also a big share of countries in the world that, like France with Bastille Day, instead celebrate a revolution or unification as their national day. Those are marked in blue.

The thing you'll notice is that most of these days are celebrating a pretty recent revolution. And there's a good reason for that: revolutionary movements as we know them today are a modern phenomenon. France's Bastille Day, dating to 1789, is by far the oldest. There's South Africa's annual celebration of its first democratic election in 1994, Iran's celebration of the anniversary of its 1979 Islamic revolution, China's celebration of the communist revolution in 1949, and so on.

There are some fascinating outliers

So almost every country on Earth has a national day that basically celebrates the anniversary of the country's founding. But there are some exceptions. Countries marked in yellow have national days that don't fall into either category; for example, the king birthday in Thailand, Columbus Day in Spain (the holiday is controversial there, too), Portgual celebrates the 1580 death of celebrated national poet Luis de Camoes, and, hilariously, Greenland's national day is the longest day of the year, which given the country's latitude is presumably also the one day of the year when the weather is halfway decent.

Ireland is a controversial case. Officially, its national day is Saint Patrick's Day, which nominally commemorates the 461 AD death of Ireland's patron saint but has evolved into more of a celebration of Irishness generally. But Ireland does have a National Day of Commemoration marking the 1921 treaty with the British in its war of independence.

Only the UK and Denmark have no national day :(

The real story, though, is that the UK is very unusual in that it is a multi-national state made up of four non-sovereign countries: England, Wales, Scotland, and Northern Ireland. The whole country can't celebrate England Day or Scotland Day. Maybe an even bigger reason is that the UK developed its present-day political state very gradually, over many centuries, rather than in the flash of a revolution or unification or independence, as happened in most other countries.

What's most amazing may be how unusual this is. Virtually no other country on earth has been so undisturbed by revolution or outside invasion as the UK, which is a big part of why they are almost alone in lacking a national day. (While the queen's birthday is celebrated in the UK, it's not a public holiday.)

The other exception is Denmark, where the 1849 signing of the constitution and the 1945 liberation from Germany are both celebrated, but not as official public holidays.

You could make a case for Japan as the third country in the world with no national day. Technically it does have a national day, the National Foundation Day, a public holiday celebrating the mythical accession of the first emperor, Jimmu, sometime around the 7th century BC. The holiday was really popular during Japan's imperial era, which is why it's not so widely commemorated today, as it's associated with imperial-era excesses that most Japanese would rather not celebrate.