Belief in God is declining. But belief in Satan is on the rise!

Share All sharing options for: Belief in God is declining. But belief in Satan is on the rise!

Filmmaker Scott Derrickson is no novice when it comes to bringing evil to life in movies. He created both Sinister and The Exorcism of Emily Rose, two films that explore themes of darkness at both human and supernatural levels. His new film, Deliver Us From Evil, which is in theaters this week, tells a similar type of tale:

Though some might classify his movies as fantasy horror films, Derrickson says they are based on true events. In an interview with Nick Olson at Christianity Today, Derrickson discussed his belief in good … and evil. Deliver Us, he told Olson, is based on a book by NYPD officer and demonologist Ralph Sarchie. In the film, the cop (Eric Bana) teams up with a Jesuit priest (Edgar Ramirez) to get to the bottom of paranormal mysteries.

In preparation for the film, Derrickson watched footage of an apparent exorcism, and also showed it to Bana, who reportedly went pale as he watched it. Here's how Derrickson describes it:

Some of what happens in the movie is true to life. I've seen a guy being held down and his forehead all of a sudden opens up on its own and starts bleeding. If you're a materialist skeptic you're going to have to deny that it happened. But Ralph Sarchie was there and saw it. Some of these extreme things really happen.

Derrickson believes some of the stuff in his films might actually happen in real life — that some evil presence might actually exist in this world, and might have the ability to take up residence in a host body.

How common is belief in the Devil? Believing in Satan is not unusual in the United States: according to a 2007 Gallup poll, most (70 percent) of the respondents admitted to holding the belief. This belief is on an upward climb. In 1990, 55 percent of respondents said they believed in Satan — that number was up by 15 percentage points by 2007. 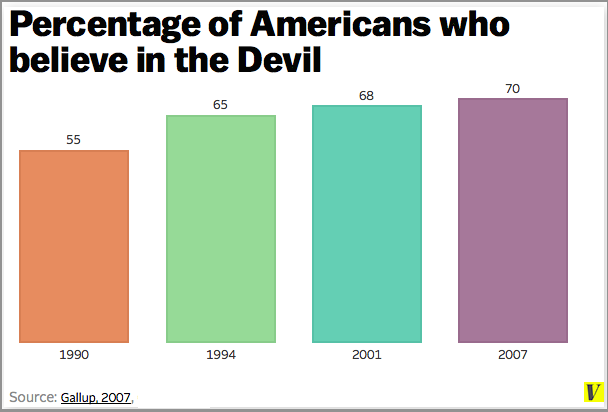 And while belief in Satan has definitely increased over the years, belief in God has slightly decreased over time. (Still, more Americans say they believe in God than Satan.)