Share All sharing options for: Can plants actually "hear" predators?

This week, a new study came out suggesting that thale cress plants can do something remarkable — they can "hear" caterpillars eating them, and produce defense chemicals in response.

In experiments, botanists recorded the sound of caterpillars eating the plants, then played the recordings to unharmed plants. Later, when they actually let the caterpillars eat the second group of plants, those that had been exposed to the recordings produced higher levels of defense chemicals than control plants. This suggests, say the researchers, that both the sound of being eaten and the tactile feeling of it spur the thale cress to produce the chemicals.

But does this really count as "hearing"? This new research is part of a broader trend. Over the past decade or so, some plant scientists have begun to advance a controversial idea: that plants are capable of behavior that's much closer to the thought processes of animals than we previously imagined.

The idea is that in sensing information about their environment and responding appropriately, plants are relying upon some sort of brain-like system. The system is composed of messenger chemicals and slow reactions, rather than ultra-fast neurons, but it's capable of surprisingly complex calculations all the same.

Most proponents of this idea usually avoid using words like "hear" or "decide" when describing the sort of activity observed in thale crass, but many nonetheless term their field plant neurobiology. At the same time, the idea of plant intelligence is very much in dispute. Other botanists argue that drawing connections to our own neurology is misleading.

So can plants "listen"? It really depends on what you mean by that word. Welcome to the contentious world of plant intelligence.

The growing field of plant neurobiology 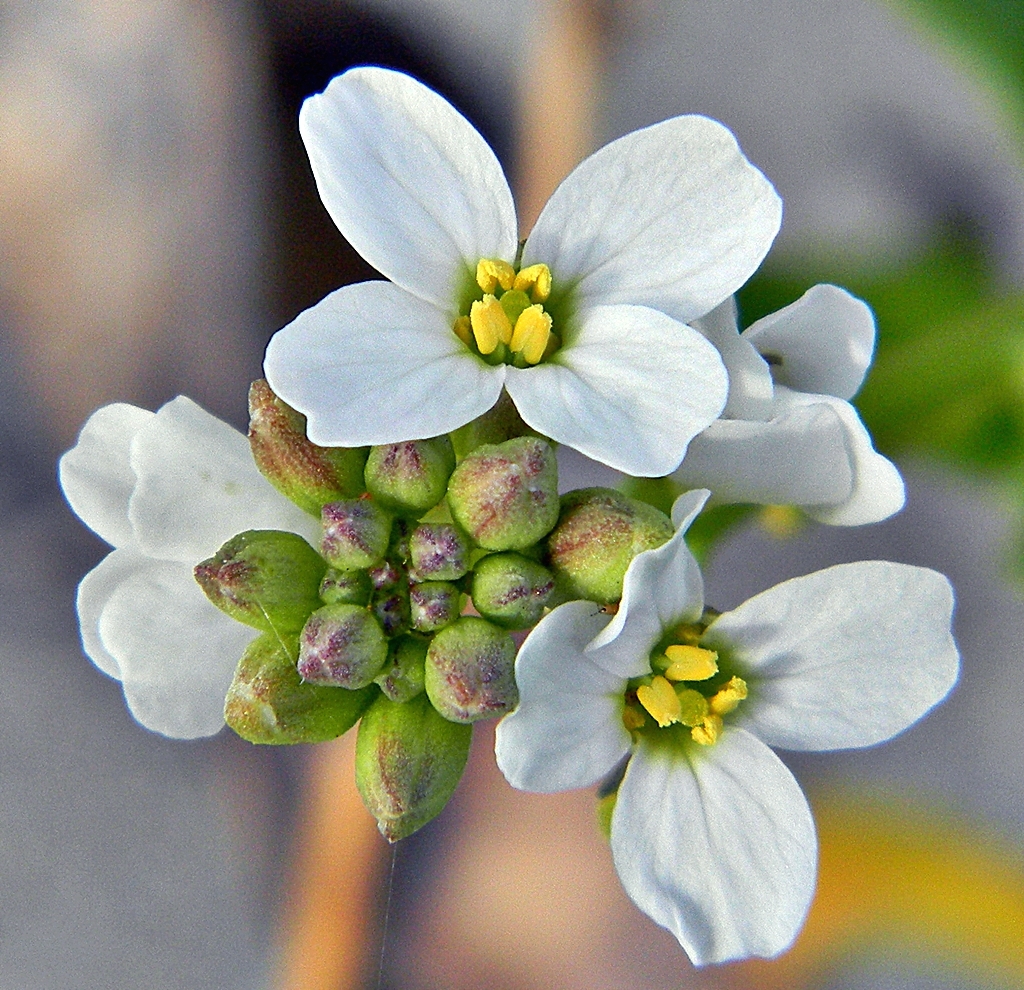 Part of the reason many botanists have long been unwilling to seriously discuss the idea of plant intelligence is an influential, pseudoscientific 1973 book called The Secret Life of Plants — which claimed that plants could sense human emotions, based on experiments in which the authors hooked up lettuce and onion plants to polygraph machines. Those results were thoroughly debunked, and they stained the very idea of plant intelligence.

Still, experiments going all the way back to Charles Darwin had shown that using their root tips, plants could sense light, gravity, touch, and other stimuli. Subsequent work has shown that plants have senses analogous to all five of ours.

We've all seen plants sense light and grow towards it. But they can also detect all sorts of chemicals in the air and water, analogous to our senses of taste and smell. Their sense of touch is especially acute: research has shown that plant roots actually alter their direction of growth before hitting a rock or a toxic substance.

Research also tells us that plants use intricate signaling systems to communicate with each other and respond to threats. Experiments have shown that searocket plants, for instance, can distinguish between kin and unrelated searockets when they're planted together, and grow fewer roots — thereby presenting less competition — when planted with kin.

Many species of plants, scientists have learned, respond to being eaten by insects by releasing chemicals that attract those insects' predators. When they're attacked by mites, for example, lima bean plants emit a chemical that attracts larger predatory mites — but they don't emit that chemical when they're simply damaged by steel wool.

How do plants assimilate all these streams of information and coordinate their responses? Traditionally, scientists believed it could all be boiled down to basic chemical signaling.

But the recent work has suggested, to some, that their internal chemical signaling systems are complex enough to merit being described by words like "thought," "decide," and "intelligence" — words we usually only use when talking about animals. Many other botanists strenuously disagree.

What's not in dispute is that plants are indeed capable of surprisingly nuanced and seemingly intelligent responses to their environment. 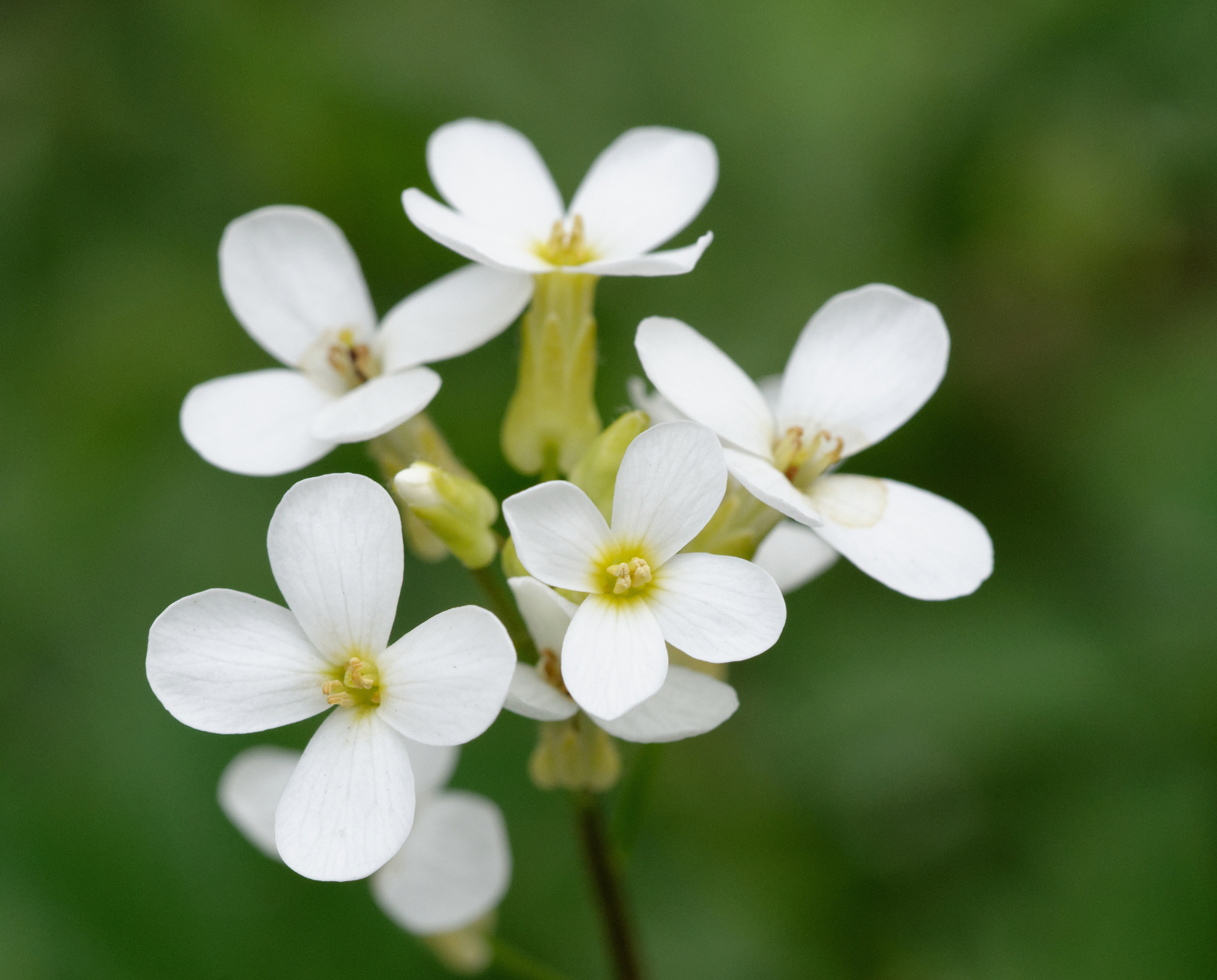 Heidi Appel and Reginald Cocroft of the University of Missouri used special microphones to record the sound of caterpillars feeding on the plants, then played the recordings to other, unharmed thale cress. They played the recordings in a timing pattern that mirrored the natural feeding behavior of the caterpillars (10 seconds of chewing, followed by a 10 second pause). As controls, other plants were kept in silence, or were played recordings of the wind or of other insects. 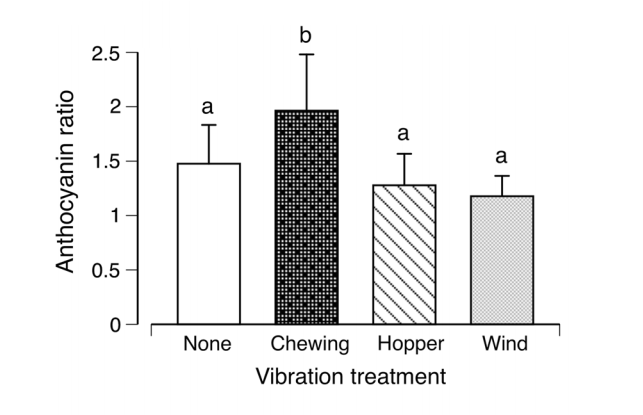 Anthocyanin, a chemical used in defense, was produced in higher quantities by plants exposed to caterpillar chewing noises, compared to the control groups. Oecologia, Appel and Corcroft

The researchers suggest one intriguing explanation — that the recordings primed the plants to begin producing the chemicals before the actual caterpillars did. The plants, in other words, somehow detected vibrations in the air (i.e. sound) and responded accordingly.

Of course, there could be other explanations. And critics of other research on plants' ability to detect sound have pointed out that we still have no idea how they might perceive it.

But this is one of several studies to suggest that plants can detect very specific sounds and respond accordingly. Other work has found that genes in rice plants can be switched on by exposure to different frequencies of sound, and that chili plants may be able to detect the presence of fennel, a competitor, by sound alone — as different plant species seem to make characteristic popping noises as they grow. Unpublished work in Italy shows that plant roots can grow toward a pipe filled with flowing water, even if the outside of the pipe is dry, suggesting that the sound of water may be involved.

Now, all this is still uncertain. But in general, what's disputed about studies on plant "hearing" — as well as plant signaling, touch, and communication — is not the actual capabilities researchers claim to have detected, but the words people are using to describe them.

So can plants listen?

Many discussions of plant intelligence end up getting hung up on semantics. When a plant detects the sound of munching caterpillars, is it "listening"? When it beings producing a defense chemical in response, did it "decide" to do so?

these semantic arguments are largely a distraction

The thing is, words like "listen" and "decide" were originally coined to describe humans and other animals. You could use a word like "think" metaphorically to describe what plants sometimes do (the same way we say a computer is "thinking"). But taken literally, the word necessarily describes the animal thought process — lightning-quick, conducted by neurons — rather than the slow, gradual processes carried out largely by chemical reactions in plants. There's nothing inherently worse about this latter process — it's just not the same activity.

But here's the thing: these semantic arguments are largely a distraction from the true subject at hand. Plants, we've recently learned, are capable of sensing all sorts of subtle cues from their environment and responding in remarkably complex ways that most people never would have expected.

That alone warrants wonder — and we're only beginning to scratch the surface of their capabilities.