How the world sees Israel, in one chart

Share All sharing options for: How the world sees Israel, in one chart

There've been demonstrations around the world over the war between Israel and Hamas, often against Israel's role in the conflict. So clearly some people feel strongly about the issue, but what does everyone else think? There's data to help answer this. A regular BBC World Service poll on international views of Israel tells us a lot of interesting things about how the country is perceived and its place in the world.

The BBC poll asks people in 22 countries (plus, some years, a few others) whether they have a "mainly positive" or "mainly negative" view about a list of countries set by the BBC. Here are the results for Israel from the past three years — it's important to look at all of them, because the 2012 survey was conducted before Israel's generally unpopular 2012 aerial campaign in Gaza: 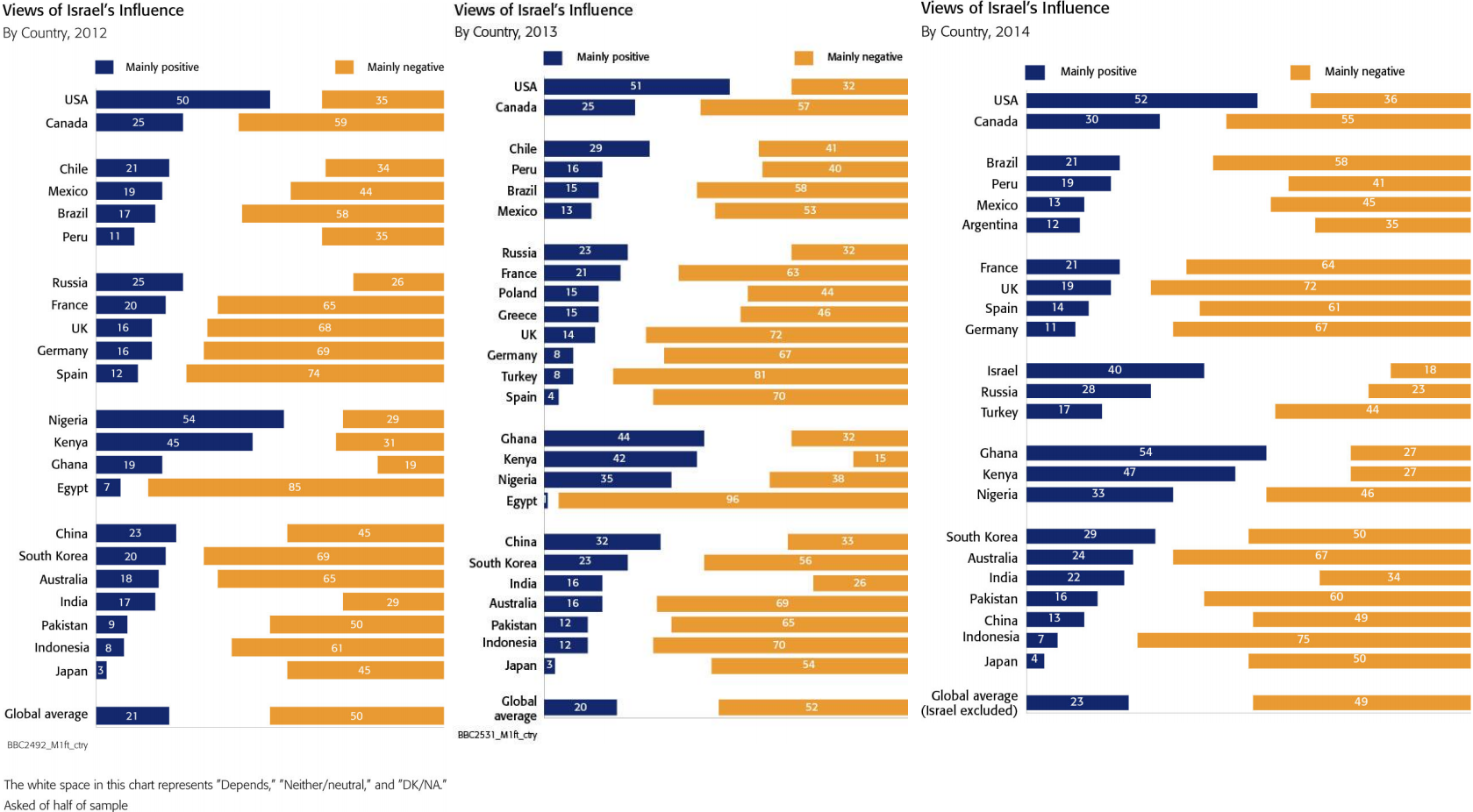 There's a lot to pick apart in here, but there are some obvious, consistent findings that are really interesting.

In almost every country surveyed, over all three years, more people said they had a "mainly negative" than "mainly positive" view of Israel. This was true in every surveyed country in Asia, Europe, and South America.

The BBC lists a "global average" for each year that shows about two-to-one negative over positive views, although the poll does not specify whether this metric weights for country size.

It's well known that Israel polls well inside the United States (here's why). But Israel's relatively strong numbers in Ghana and Kenya, as well as its strong result in Nigeria in 2012, might be more surprising.

There's a few potential explanations. One is that, shortly after Israel's founding, the country made a concerted effort to reach out to sub-Saharan African states. Israel, as University of Ghana political scientists Kwame Boafo-Arthur and E. Gyimah-Boadi explain, was a vocal supporter of decolonization in the 1950s and an early and enthusiastic provider of foreign aid.

This relationship soured in the 70s and 80s over Israeli support for apartheid South Africa and conflict with Arab states, but Boafo-Arthur and Boadi see a general trend towards improved relations between Israel and African states in the post-Cold War era. About 40 African states either reopened shuttered relations with Israel or established them for the first time, and sub-state economic ties flourished.

Another potential explanation is more specific to some of the countries in the poll. Both Kenya and Nigeria face serious threats from Islamist militant groups (al-Shabaab and Boko Haram, respectively). This might make them more sympathetic to nations, like Israel, taking aggressive military actions against what they might see as similar threats. Indeed, Kenya and Nigeria are among a small handful of countries around the world whose publics have a net-positive view of America's drone program.

While most publics may broadly see Israel negatively, that is not always reflected in government policy. This map, which shows which countries have formal diplomatic relations with just with Israel (blue), just with Palestine (green), or both (grey), is a rough barometer for how governments approach the conflict:

The pattern among countries in Europe and the Pacific are particularly striking. These countries' citizens tend to be pretty critical of Israel. French people, for example, hold negative views of Israel over positive by a three-to-one margin. Yet their governments have full diplomatic relations with Israel and do not recognize Palestine as an independent country. The reasons for that are complex and have to do with views of how to adjudicate the conflict as much as with international politics, but the point is that popular views of Israel do not necessarily predict government policy on Israel-Palestine.