Gay, lesbian, and bisexual youth are nearly four times more likely than their heterosexual counterparts to attempt suicide over the course of a year, according to a new major study.

The study was the first of its kind to use federal survey data to break down the link between race and the mental health of LGB (which it calls "sexual minority") youth ages 13 to 18. While sexual minority youth are consistently more likely to be at risk for suicide compared to their straight peers, the study found the prevalence of mental health issues varies among different sexes, races, and ethnic backgrounds.

In most cases, the differences can be pinned on broader socioeconomic factors that go beyond sexual orientation. Black LGB youth, for instance, were less likely to to report suicidal thoughts than white LGB youth. The researchers explain this difference by citing other studies that show black people are more likely to view suicide as negative and immoral, compared to their white counterparts.

The consistent disparity between LGB youth and their straight peers, meanwhile, can be blamed on little other than the discrimination and isolation faced by people of minority sexual orientations in the US. This study shows the real effects of consistent prejudice — at home, at school, in health-care systems — faced by far too many LGB kids across the country, particularly at an age when they're most sensitive to peer pressure and emotional trauma.

There are a few caveats to the study. It's based on 2005 and 2007 surveys of nearly 73,000 youth (6,245 of which identify as a sexual minority), so the results, while expansive, could be slightly outdated at this point. It's also based on self-reports, which could lead to underreported mental health problems and minority sexual orientations.

Here are five charts with the study's findings. This list is by no means everything the study found, but it gives a rough glimpse into the devastating mental health disparities that exist among LGB youth.

1) Gay, lesbian, and bisexual youth are much more likely to report feeling seriously sad or hopeless in the past year 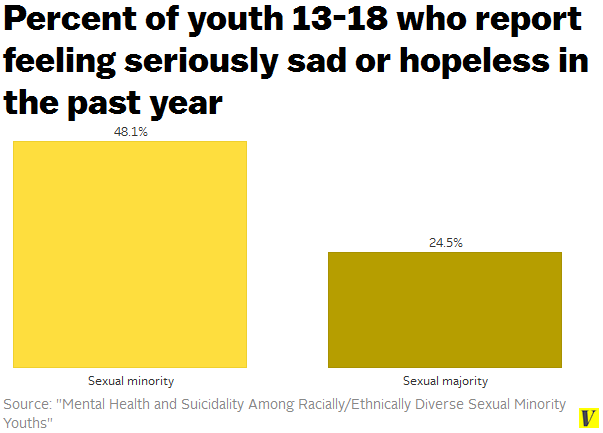 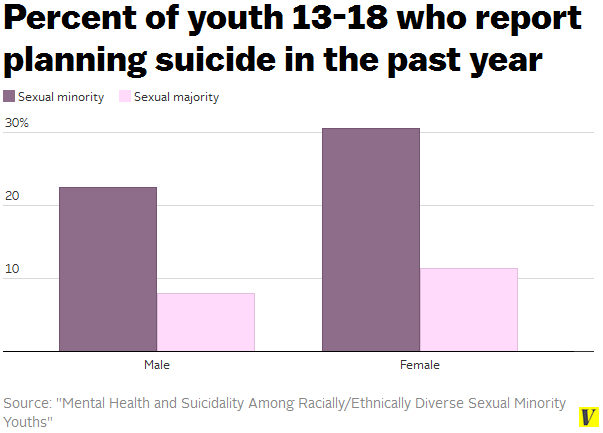 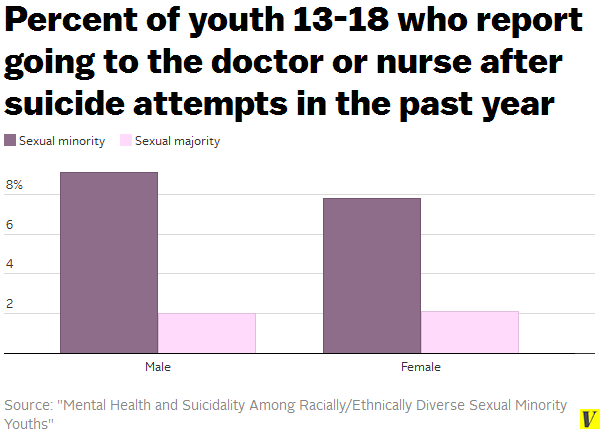 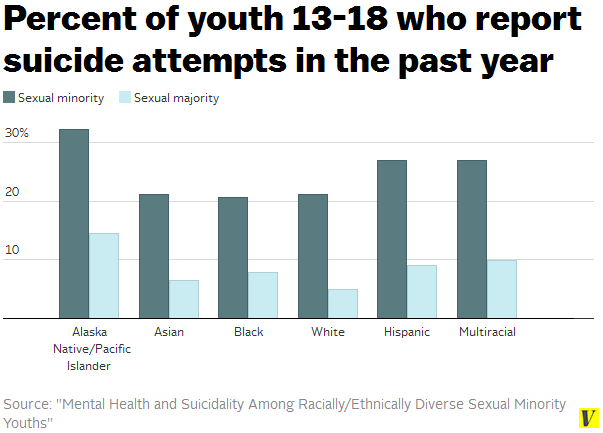 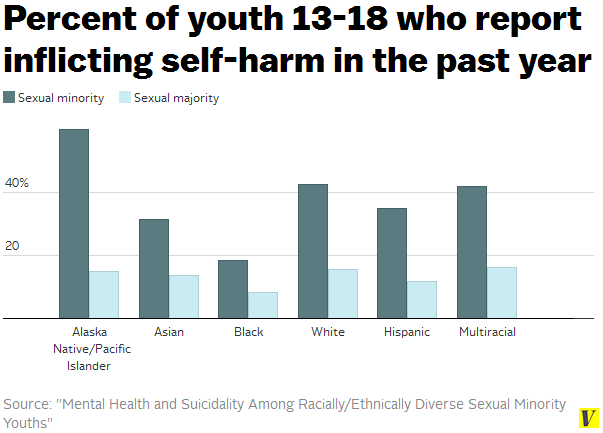 What's the takeaway from the study?

The researchers argue these results show it's misguided to look at LGB communities' mental health issues through broad categories.

"The results regarding diversity in outcomes among sexual minority youth point to the limitations of using categories such as 'youth of color,' which can obscure distinctions among racial/ethnic groups," study author Wendy Bostwick said in a statement. "The findings emphasize the need for greater attention in research and public health interventions to similarities and differences among diverse groups of sexual minority youth."

The study acknowledges that even its own categorization of sexual minorities may oversimplify the issue. Previous research, for instance, found health outcomes can differ starkly among people who identify as homosexual and those who identify as bisexual. The study also doesn't account for transgender individuals and some of the other forms of sexual and gender identification, such as genderqueer and intersex.

With this research, Bostwick and others establish that there are big differences in mental health outcomes between different groups within LGB communities. The hope is that future research could delve deeper into all the moving factors to better address mental health issues that are too prominent among LGB youth.

If you or anyone you know has suicidal thoughts, seek help immediately. The National Suicide Prevention Lifeline is always open at 1-800-273-8255.