Ebola: what you need to know

Share All sharing options for: Ebola: what you need to know

The deadliest Ebola outbreak in recorded history is happening right now. The outbreak is unprecedented both in infection numbers and in geographic scope. And so far, it's been a long battle that doesn't appear to be slowing down.

The Ebola virus has now hit four countries: Sierra Leone, Guinea, Liberia, and recently Nigeria, according to the country's ministry of health.

The virus — which starts off with flu-like symptoms and often ends with horrific hemorrhaging — has infected 1,201 people and killed an estimated 672 since this winter, according to the numbers on July 23 from the World Health Organization.

Ebola is both rare and very deadly. Since the first outbreak in 1976, Ebola viruses have infected thousands of people and killed roughly 60 percent of them. Symptoms can come on very quickly and kill fast: 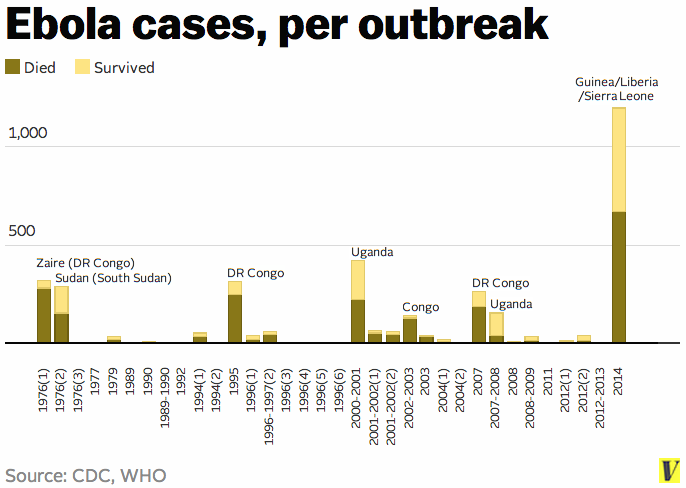 Each bar here represents a different Ebola outbreak. The data is what the CDC has on record. Not every case or death always gets officially recorded, so there is always some wiggle room in numbers like these. 2014 is estimate of the current outbreak as of July 23, 2014 from the WHO.

The current outbreak has been going on since late 2013 or early 2014 and has been getting extra attention in the news recently as several doctors have caught the disease, including a Liberian doctor (who died) and Sierra Leone's top Ebola doctor (who is undergoing treatment).

The current outbreak started in Guinea sometime in late 2013 or early 2014. It has since spread to Sierra Leone, Liberia, including some major capital cities. And one infected patient traveled to Nigeria on a plane, according to the Nigerian Ministry of Health.

For starters, this outbreak concerns the most deadly of the five Ebola viruses, Zaire ebolavirus, which has killed 79 percent of the people it has infected in previous outbreaks. (The virus is called that after the formerly named Zaire, which, along with Sudan, experienced the first Ebola outbreak back in 1976.)

In many ways, how well a country dealS with Ebola comes down to basic health care and public education

Some people are afraid that medical workers are causing Ebola, and workers "have been threatened with knives, stones and machetes, their vehicles sometimes surrounded by hostile mobs," according to the New York Times.

The humanitarian group Doctors Without Borders has noted 12 villages in Guinea that might have Ebola but aren't safe for workers. In Sierra Leone, a protest against a clinic led to the police using tear gas. And a World Health Organization assessment in Liberia noted problems with tracing patients' contacts with other people, "persisting denial and resistance in the community," and issues with "inadequate" measures used to prevent and control infections, weak data management, and "weak leadership and coordination," according to a statement released on July 19.

In many ways, how well a country can deal with an Ebola outbreak comes down to basic health-care practices and public education. With enough resources poured into the effort, people should be able to contain this outbreak. So far, however, these countries are really struggling.

Ebola is relatively hard to catch compared to some other viruses like measles, SARS, or the flu because it doesn't like to hang out in the air.

In order to contract Ebola, someone must touch the blood or bodily fluids (including sweat, urine, and semen) of a person or animal who's infected (alive or dead). People can also catch it through indirect contact with victims' fluids, such as via bedding or medical equipment.

Ebola's limited transmission ability is one of the main reasons why outbreaks can often be stopped within weeks or months. What it takes is public education and good health-care hygiene like isolating patients, sterilization procedures, and the use of gloves, masks, and other protective gear.

The Ebola viruses known today don't spread from person-to-person well enough to have much risk of causing a wide pandemic across several continents. The risk of Ebola coming to the US is still very low.

And if a case did appear in the USA, it "would not pose a major public health risk" Michael Osterholm, biosecurity expert and director of the Center for Infectious Disease Research and Policy at the University of Minnesota told USA Today. Why? Because it would be quickly tracked down and controlled.

Update: Removed a statement that Ebola cannot be caught from a cough or sneeze.