Share All sharing options for: Why doctors — and not Michele Bachmann — are to blame for poor HPV vaccine rates

Whenever the vaccine against the human-papilloma virus (HPV) makes headlines, it's usually because of disagreements between science and religion — or something Michele Bachmann said.

Yet according to data from the Centers for Disease Control and Prevention, one of the key reasons people don't get their children HPV-vaccinated is much less controversial and maybe more disturbing: They simply don't even know it's an option.

As you can see in this chart, "lack of knowledge" was cited as the top reason why parents don't vaccinate their girls, followed by beliefs that it's not needed and safety concerns. 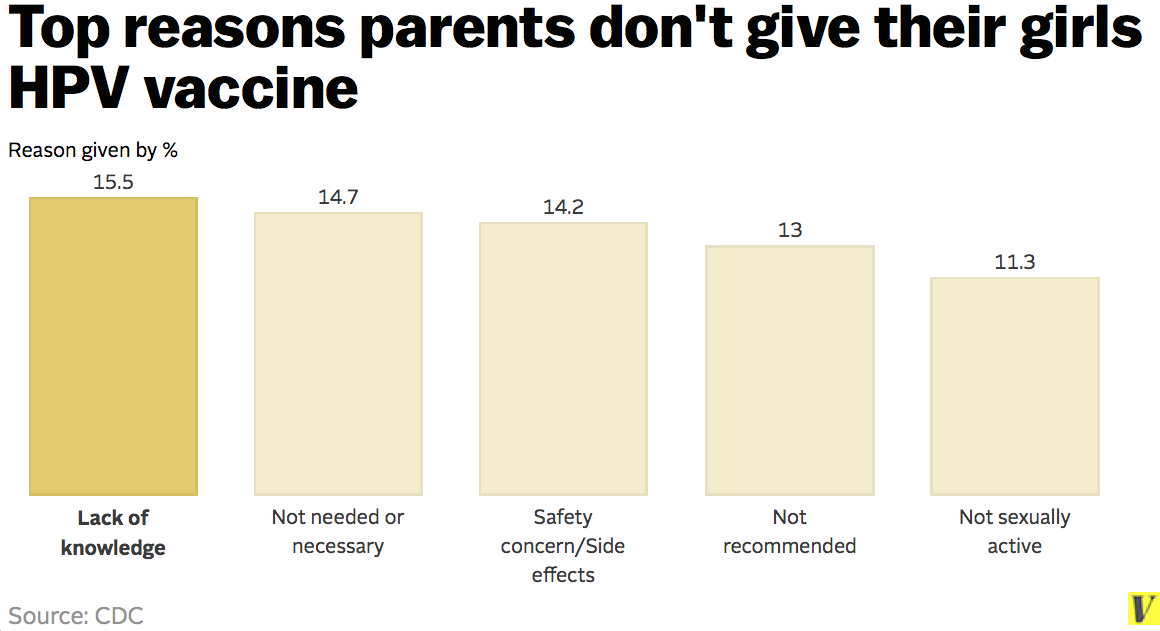 Among the parents of boys, misperceptions about recommendations and a lack of knowledge were the leading reasons for skipping out on the vaccine. 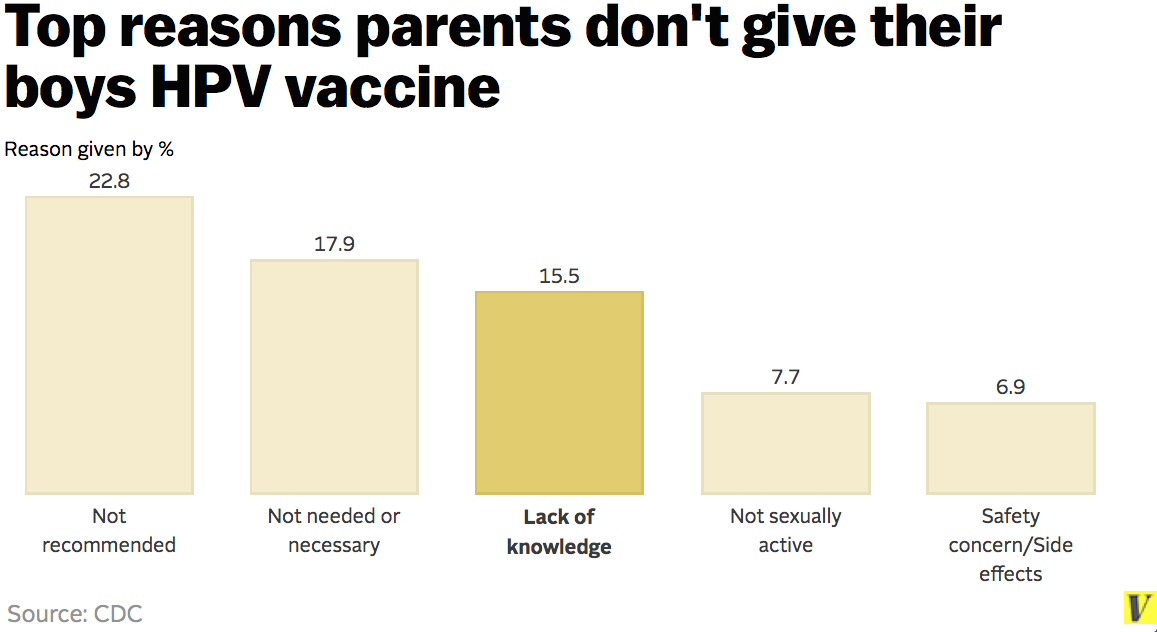 The CDC reported that a doctor's suggestion to get an HPV vaccine was strongly associated with a teen getting immunized. "It is concerning that approximately one third of parents of girls and over half of parents of boys reported that their child's clinician had not recommended that their child receive an HPV vaccination." So it's not only vaccine denialism and religious beliefs getting in the way of better vaccine coverage here. It's doctors.

The CDC says there's "persistent gap in coverage between HPV vaccination and other vaccinations recommended for adolescents." In other words, teens are getting their other shots, but not the HPV vaccine.

Consider this: Right now, the CDC's Advisory Committee on Immunization Practices recommends HPV, Tdap (for tetanus, diphtheria and pertussis), and menigococcal vaccines for youth. While only 57 percent of girls and 35 percent of boys ages 13 to 17 got one or more doses of the HPV vaccine, 86 percent the same cohort had received a Tdap shot and 78 percent received the menigococcal vaccine.

In other industrialized nations, HPV-vaccine coverage hovers around 80 percent. If the HPV vaccine were treated like any other here, the CDC reported vaccine rates in the US would be quite different:

"Access is not the issue here," Shannon Stokley, associate director for science at the CDC's immunization services division, summed up. "We think it's more attitudes about the vaccine, about the disease."

Why are doctors failing?

Doctors are not immune to those attitudes and biases, Stokley said. "Providers think they're giving a recommendation but often they present the HPV vaccine as something different or optional. Doctors will say, 'You need to get Tdap. You need to get the menigococcal vaccine. Let's talk about HPV and then you can make a decision."

Indeed, a new study in the journal Pediatrics confirmed that point. Doctors were interviewed  about their attitudes toward the vaccine and lead author Dr. Rebecca Perkins, a gynecologist at Boston Medical Center, found framing was everything. "When physicians made (the HPV vaccine) into something different than a regular vaccine, parents got worried. When it was framed as ‘this is a regular vaccine, it's important, it prevents cancer, you need these three shots today,' they were much more successful."

One of the key reasons the vaccine was skipped, Perkins said, had to do with the doctors hesitancy to bring the issue up. "Physicians were focusing on the sexually transmitted infections aspect of the vaccine rather than on cancer prevention part. That led to it being tied to other issues in sexuality, which they were not necessarily comfortable discussing in 11 year olds," said Perkins. "Providers — more so than parents — were hesitating to bring up the issue or recommend it strongly at age 11 or 12, and then the delay just led to more delay and the vaccine getting forgotten or skipped."

While the latest CDC study did not investigate doctors' attitudes about the HPV vaccine, Stokley also thinks the problem is the vaccine's association with sex. "I think doctors are hesitant because they're expecting a big discussion with the parent," she said. "Because the virus is sexually transmitted, they may be expecting a lot of push-back." This may be particularly true for rural physicians, who are less likely than their urban counterparts to give a strong recommendation for the HPV vaccine.

In order for vaccine coverage to increase, doctors must figure out how to have that conversation with parents. Said Stokley, "Doctors are key because they are a trusted source of health information parents, and their recommendation carries a lot of weight."

"(Doctors) need to make sure when they talk about the HPV vaccine, they are not treating it as a special or different vaccine. It's something that's recommended and it's used to protect teens so they can grow up and not have to worry about whether they'll develop cancer."