In high-income countries — like the United States and Canada — some impact of the HIV epidemic has shifted. The disease escalated among intravenous drug users in the mid-'90s, but as its impact fell away in that population, it grew among female sex workers. Estimates of HIV prevalence among prostitutes in Vancouver, for example, are as high as 20 percent; infection rates vary depending on where the sex work takes place.

A recent paper in the British medical journal The Lancet suggests a controversial way to fight back against the disease's spread: decriminalize prostitution altogether.

Among female sex workers in Canada, HIV rates are highest for those who work predominantly outdoors (street prostitution) and "informally" indoors (finding clients at bars or hotels, for example). Twelve and 20 percent of those populations have the HIV virus, respectively.

Researchers think the rates are so high because when prostitution is a criminal offense, sex workers operate in more remote locations where they have less protection and less control over their work.

Violence from clients — and from police — corresponds to less regular condom use, driving the spread of infection. If prostitution was decriminalized, the authors argue that workers would be exposed to less violence and be in a better position to control their business, making it easier to avoid risky sexual situations.

More specifically, they estimate that decriminalizing sex work could avert up to 39 percent percent of infections expected to occur through sexual contact related to prostitution in Vancouver over the next decade. That's illustrated below, in the far left set of bars. In reading the chart, "FSW" refers to female sex workers, and "ICU" refers to inconsistent condom use. 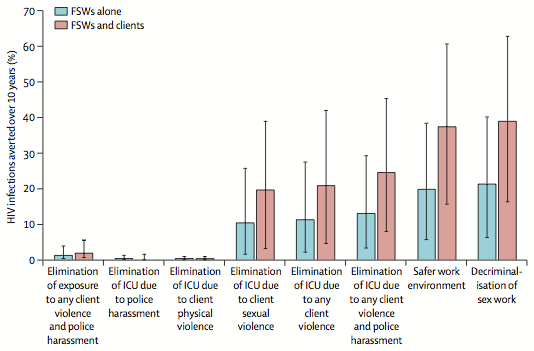 Effect of different interventions on HIV infections potentially averted among female sex workers
and their clients over 10 years in Vancouver, Canada. (The Lancet)

The estimates that the authors provide are the maximum impact of decriminalizing prostitution, because their model assumes complete elimination of violence, police harassment, and stigma. While that sort of cultural transformation could take years, the study still provides important evidence on the consequences of criminalization. Another paper released earlier this month found that the incidence of gonorrhea and rape fell when Rhode Island accidentally decriminalized sex work.

Policing is a big part of the problem

"'police harassment' can mean anything from raids to coercion and abuse."

About one-third of female sex workers who work in formal indoor establishments, like massage parlors, report experiencing police harassment. Those are considered the safest venues; that figure jumps to 70 percent among those who work in outdoors (or informally indoors).

"'Police harassment' can mean anything from police raids to coercion and abuse," says Kate Shannon, lead author on the study. "It can also result in enforced displacement — sex workers being forced to work in more isolated spaces, where they have less access to safety and protection."

When sex workers are displaced to more obscure venues, they have less ability to control their business — from client selection to the types of sexual acts and condom use. More obscure venues leave female sex partners in a weaker bargaining position and more vulnerable to violence from clients. The author's research demonstrates that exposure to police harassment and client violence seems to have an immediate and sustained negative effects on condom use, putting sex workers at higher risk of contracting HIV and other sexually-transmitted infections.

Canada could decriminalize sex work by the end of 2014

PARLIAMENT MAY NOT HEED THE RESEARCH

When new research comes out, it often doesn't have the potential to immediately affect policy. But this study keys in on Vancouver — and Canada's government is currently deliberating the criminality of sex work.

Last December, the Canadian Supreme Court struck down laws that targeted sex workers, effectively decriminalizing prostitution. The ruling did not go into effect immediately, though — the court decided to give the federal government one year to determine whether they wanted to redraft laws to maintain the criminal status of prostitution.

However, Canada's parliament may not heed the research — they're considering a bill that would re-criminalize sex work, and they have through the end of the year to enact it before the court's 2013 ruling takes effect.

Decriminalization is necessary to change other conditions

Decriminalization isn't the only way to make prostitution safer and reduce public health threats. But it is something of a necessary condition. The authors outline other potential reforms that could reduce HIV — creating a safer work environment and eliminating inconsistent condom use by reducing violence and police harassment — but it's nearly impossible to realize those changes while sex workers operate illegally in the shadows.

"The ability to scale those up is only going to happen through legislative reform," Shannon said.