Share All sharing options for: Medicare isn't going bankrupt. This chart proves it.

Later today, the Obama administration will release its annual report on when it expects the Medicare Trust Fund to run out of money. This is known, more formally, as the Medicare Trustees Report — and it will likely lead to a moderate amount of hand-wringing about Medicare's ultimate demise.

There is exactly one chart you need to see to understand that hand-wringing is pretty much unnecessary. Reports of Medicare's death have been, as Mark Twain would put it, greatly exaggerated.

For decades now, the Trustees have published predictions on when Medicare would run out of money if nothing else in the world changed. And in every case, lots of things in the world changed — and Medicare never found itself short on funds. The Congressional Research Service tallied up the old projections in a 2009 report, which I used to create the table below. 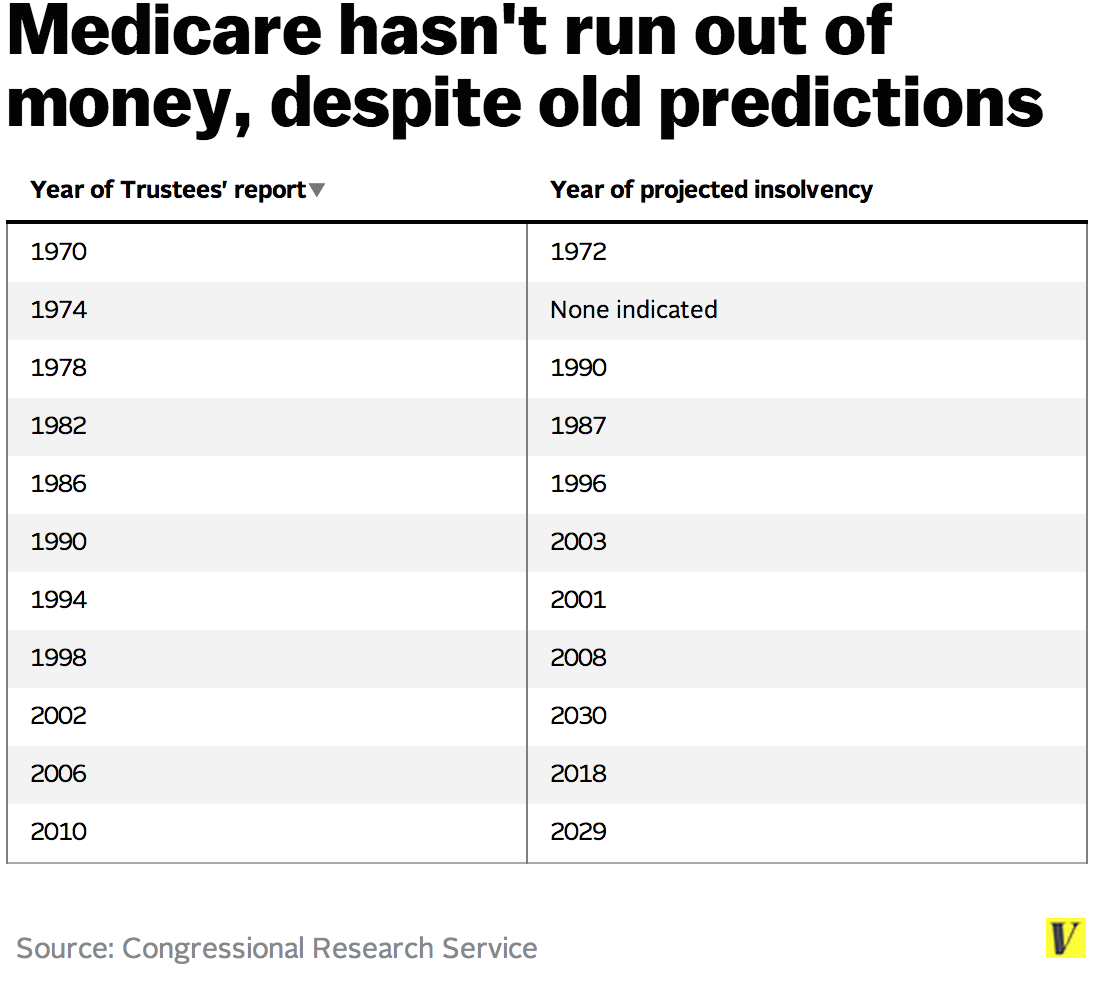 What you'll see here is that this report has predicted, many times in the past, that the Medicare Trust Fund would run out of money. But its never actually happened: each time the projected insolvency date gets close, there's typically a pattern where Congress steps in and passes some type of policy to make trust fund dollars stretch at least a decade longer.

At its core, the Medicare Trust Fund is an accounting mechanism. It's where payroll taxes go to help finance the Medicare program — and its where the government-run insurance program draws funds to pay seniors' hospital bills.

The projected date of insolvency speaks to a world where Congress never changes anything about Medicare, the world of health financing stays static, and, if we keep spending payroll tax dollars at current rates, the fund can't pay its bills.

In other words, the date of projected insolvency speaks to a world that doesn't really exist. Health financing isn't static, and Congress has lots of tools in its legislative tool box to ensure Medicare can continue paying seniors' bills. That's what they've done in the past and, given that seniors are pretty big fans of Medicare (as well as pretty big fans of voting), its a decently safe assumption that its what they would do in the future, too.

Whatever the new insolvency projection released today is, you can rest pretty sure that Medicare won't pack up and stop paying bills that year — or any other time soon.