The mystery at the heart of the Gaza crisis: did Hamas really kill 3 Israeli students?

Share All sharing options for: The mystery at the heart of the Gaza crisis: did Hamas really kill 3 Israeli students?

On June 13, three teenage Israelis went missing in the West Bank, where they were studying at a religious school. They were later found shot to death. Their murders, which the Israeli government blamed on the Palestinian militant group Hamas, eventually led to the Israel-Gaza fighting that has already killed over 1,000 Palestinians and almost 50 Israelis.

But is the Israel-Gaza conflict premised on a lie, or at least a mistake? You may have read reports over the weekend suggesting as much: that Hamas actually did not murder the three Israelis, that they were in fact killed by a "lone cell." If true, many have argued, the murders would be somewhat akin to the Iraqi weapons of mass destruction that served as justification for the 2003 US-led invasion but never materialized. It would be a huge scandal.

There is somewhat more ambiguity to this story, though, than what you may have read — both in terms of the evidence about the Israeli boys' killers and about how their deaths fit into the conflict still ongoing today.

The Israeli police official has since walked back his claim 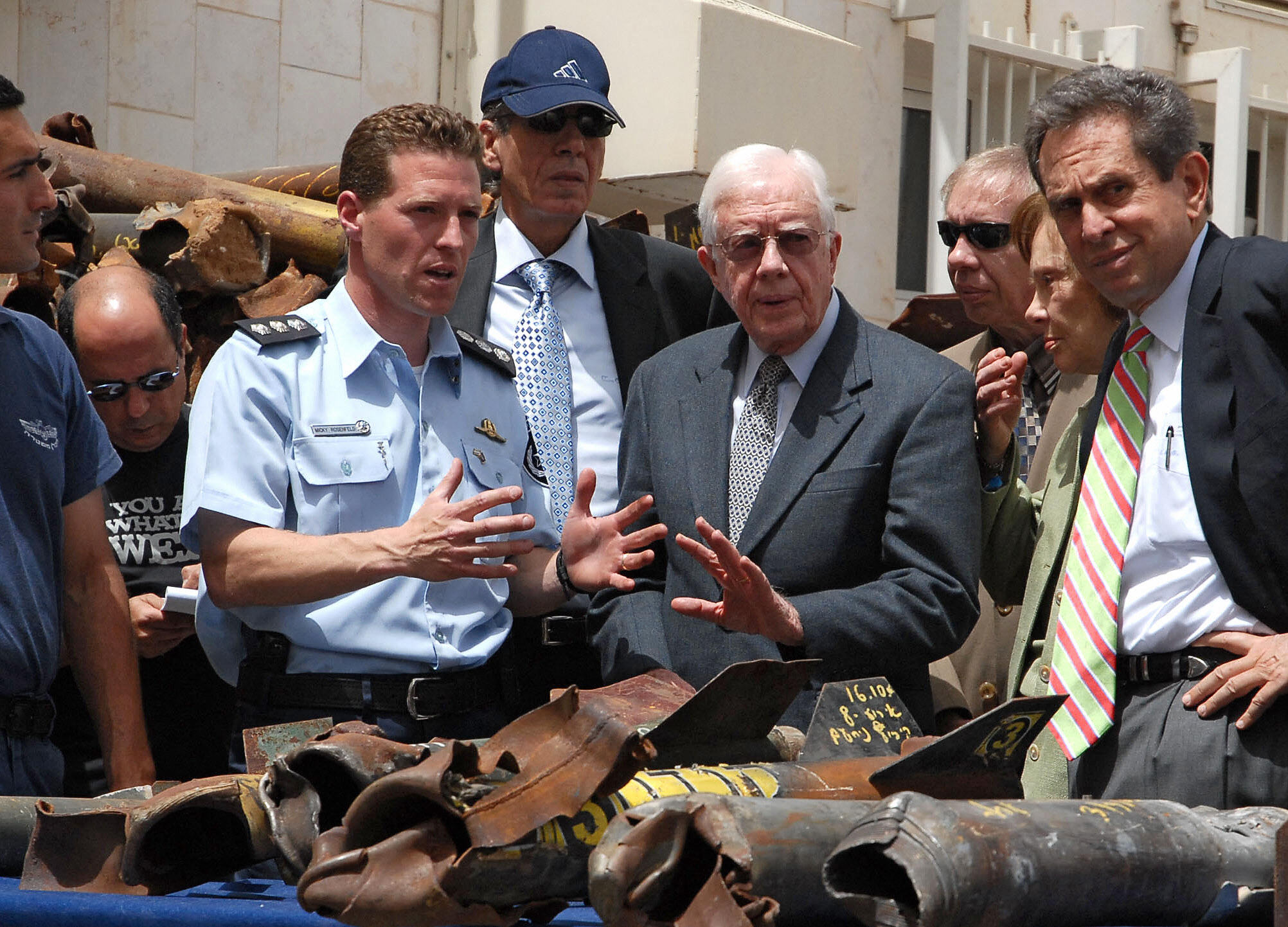 The story was set off by Israeli police spokesman Micky Rosenfeld, who told BuzzFeed's Sheera Frenkel and the BBC's Jon Donnison that the murders had been committed by a "lone cell" that was affiliated with Hamas but not acting under Hamas orders. He went on to explain that lone cells are very difficult for the Israeli police to track because they communicate less.

On Sunday, the Daily Beast's Eli Lake called up Rosenfeld to ask him about it, and the police spokesman would not confirm the story:

Rosenfeld said that he had told Donnison what the Israeli government had been saying all along. "The kidnapping and murder of the teens was carried out by Hamas terrorists from the Hebron area," he told The Daily Beast. "The security organizations are continuing to search for the murderers."

It seems next to impossible to imagine that either Frenkel or Donnison would fabricate or exaggerate the quotes, much less that both would happen to fabricate such similar statements. It seems most likely that Rosenfeld has decided to walk back the claim, which may help explain why neither Frenkel nor Donnison appear to have written articles about the quotes.

There's always been ambiguity over whether Hamas killed the three Israelis 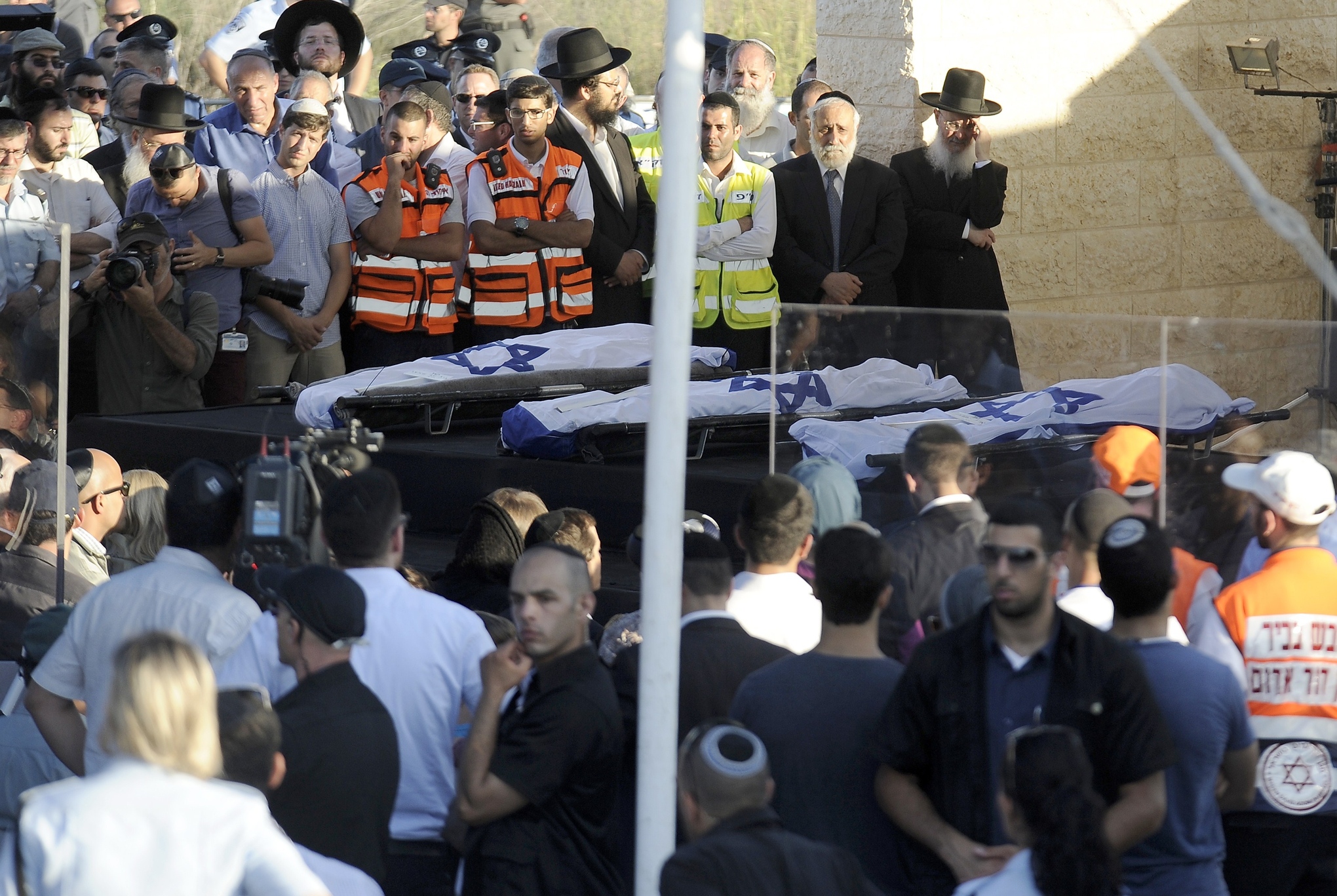 From the beginning, there has been uncertainty and disagreement on this question; Friday's revelation only furthers that uncertainty.

Israeli Prime Minister Benjamin Netanyahu has been insisting since the beginning that the murders were the work of Hamas and that the entire group was responsible.

For just as long, though, a small number of Israeli officials have being going off the reservation, saying that the killings were more likely done by loners who may have been Hamas members but were acting on their own. BuzzFeed's Frenkel has been especially good at fleshing out this ambiguity, pointing to signs that it was a "crime of opportunity" not sanctioned or ordered by Hamas leadership.

A month ago, when Israeli intelligence released the name of the Palestinian family it believes was behind the attack, Al-Monitor's Shlomi Eldar profiled the family's long history of going rogue from Hamas, staging attacks during times of Hamas-sanctioned ceasefire in order undermine the group's efforts at even the most basic compromise.

The murders always looked a bit off for a Hamas operation. The group has a record of coordinated attacks — like the series of million-dollar tunnels it used recently to insert fighters, disguised as Israeli soldiers, within rural Israel — and such a ham-fisted, one-off incident looked out of character. It also seemed strange that Israel's vaunted signals intelligence programs were not able to pick up chatter beforehand.

On the other hand, Hamas has used and encouraged kidnapping in the past. It is, after all, a terrorist organization that targets Israeli civilians. And its leaders, though they denied responsibility for the attack, still praised it. We have tried to reflect this ambiguity and uncertainty in our coverage, as have a number of other outlets.

Rosenfeld's statements deepen the doubt as to whether Hamas was really responsible, and indicate further that there is likely disagreement within the Israeli government over this question. That is significant on its own and should shed doubt on Netanyahu's statements asserting with total certainty that Hamas is responsible. But we are nowhere near the point where we can say definitively that Hamas was or was not responsible. 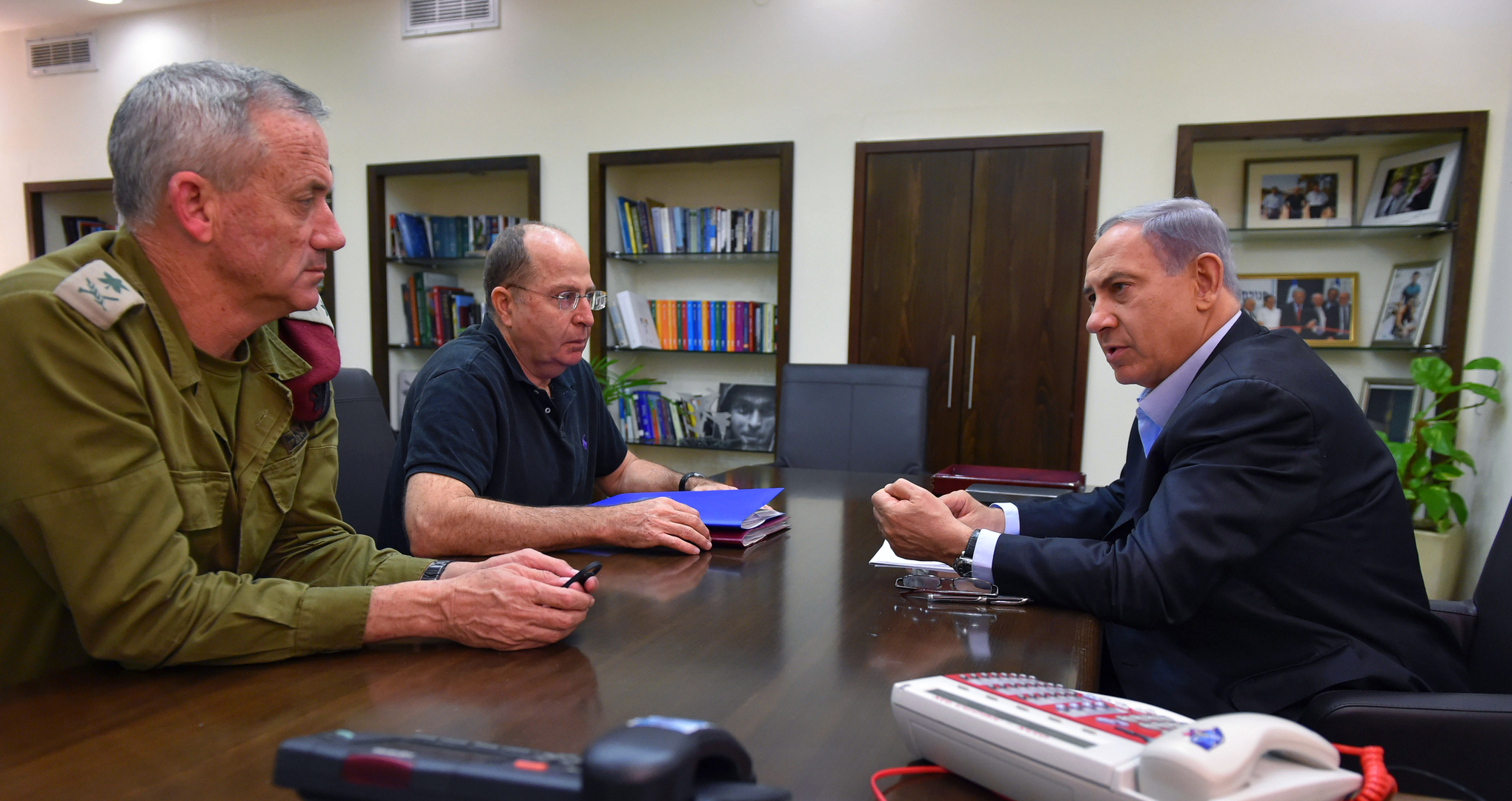 Netanyahu, right, meets with the defense minister and chief of staff (Ariel Harmoni/ Israel Minister of Defense via Getty Images)

One reason that there has been some wariness around Netanyahu's categorical insistence that Hamas was responsible for the deaths is that he very quickly responded, in what looked like at least a degree of opportunism, by arresting hundreds of people in the West Bank thought or known to be associated with Hamas. Israel also launched a limited bombing campaign — small, relative to what came later — against targets in Gaza.

Within a couple of weeks, Netanyahu dismantled Hamas in the West Bank — at no small cost to Palestinian civilians whose lives were disrupted in the sweeps and arrests — which he framed as a response to the murders.

did netanyahu really plan to invade gaza all along?

It would be an understatement to say that Netanyahu distrusts Hamas, and he has good reason to — it is a terrorist group committed to Israel's destruction. But Hamas is also, as of earlier this summer, supporting a Palestinian unity government with the West Bank-based moderate party Fatah. The US has supported the Hamas-Fatah deal as a step toward peace negotiations. Netanyahu has opposed it as empowering terrorists. The arrests have had the effect of undermining the unity deal.

So Netanyahu got two things he wanted pretty quickly: rounding up Hamas members in mass arrests, and weakening the unity government. He justified these actions by blaming Hamas for the murdered students. So if it turns out that Hamas did not kill them, or just that Netanyahu was aware of any uncertainty within Israeli intelligence, then that's a big deal and very damning. 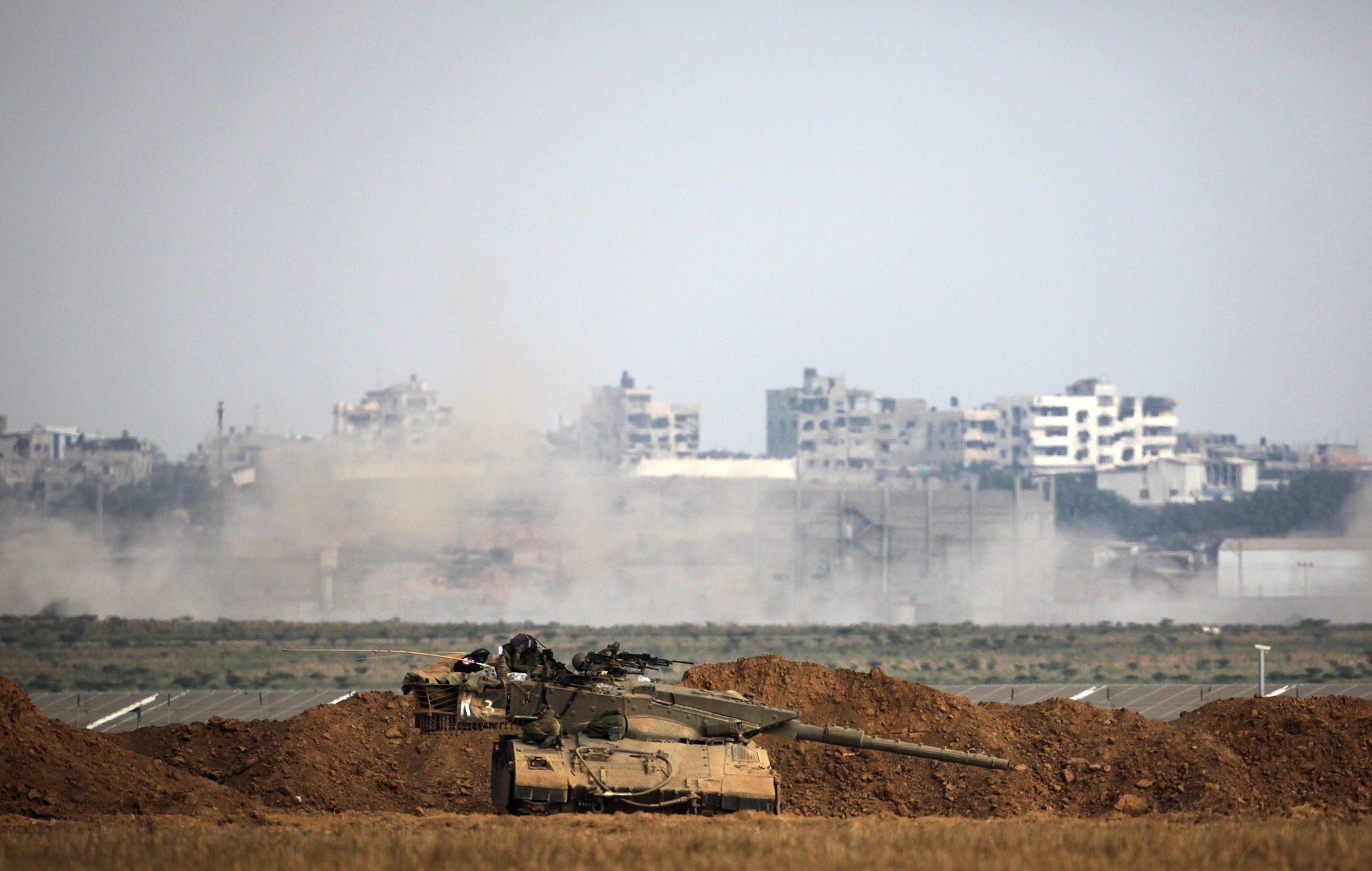 Some have argued that Netanyahu's placement of blame for the murders on Hamas led directly not just to the West Bank raids, but to the current war in Gaza. This is both true and not true.

It is accurate that the crisis began with the murders of the three Israeli students and has since snowballed into the Israel-Gaza crisis. But it was not a straight line. And, unlike the Israeli mass arrests in the West Bank, it is not totally clear that Netanyahu wanted to invade Gaza from the get-go. In other words, it is not fair to say that Netanyahu used the murders in order to justify the Gaza war; the one did not lead so simply into the other. The Iraq/WMDs comparison is not accurate.

the structure of the conflict makes periodic invasions all but inevitable

There were some big steps between the murders and the Gaza invasion that were outside of Netanyahu's control. First, Israeli right-wing extremists murdered a Palestinian teenager in Jerusalem, in apparent "revenge" for the deaths of the students. Then, Palestinians in the West Bank, outraged over the murder and over the arrests, protested. Eventually outrage boiled over and Hamas launched 40 rockets from Gaza into Israel, the first time it had done so and taken responsibility since 2012.

Israel responded with more air strikes, Hamas responded with more rockets, and both escalated for several days. The war began, Israel says, when it discovered Hamas tunnels running from Gaza to Israel that it had attempted to use to attack Israelis. Israel invaded to destroy the tunnels and Hamas "infrastructure" more broadly.

In order to say that Netanyahu blamed Hamas for the Palestinians murders in order to invade Gaza, as President George W. Bush premised his Iraq invasion on Iraqi weapons of mass destruction, two things would have to be true.

First, Netanyahu would have had to have planned the sequence of events from the beginning such that he would get to invade Gaza; the Middle East is rife with conspiracy theories but unless Netanyahu secretly controls Hamas, Israeli extremist gangs, and Palestinian protesters, he did not plan this. It seems much likelier that things gradually escalated out of control until both sides were sucked into war.

Second, Netanyahu would have had to have wanted to invade Gaza. You don't devise an elaborate conspiracy to do something, after all, unless you actually want to do it. This is ultimately a question of Netanyahu's personal internal motivation, which I will not claim to know. For whatever it's worth, an American veteran of the Israel-Palestine peace process named Aaron David Miller wrote in the Washington Post that he believes Netanyahu did not want or seek the war. Maybe, maybe not. 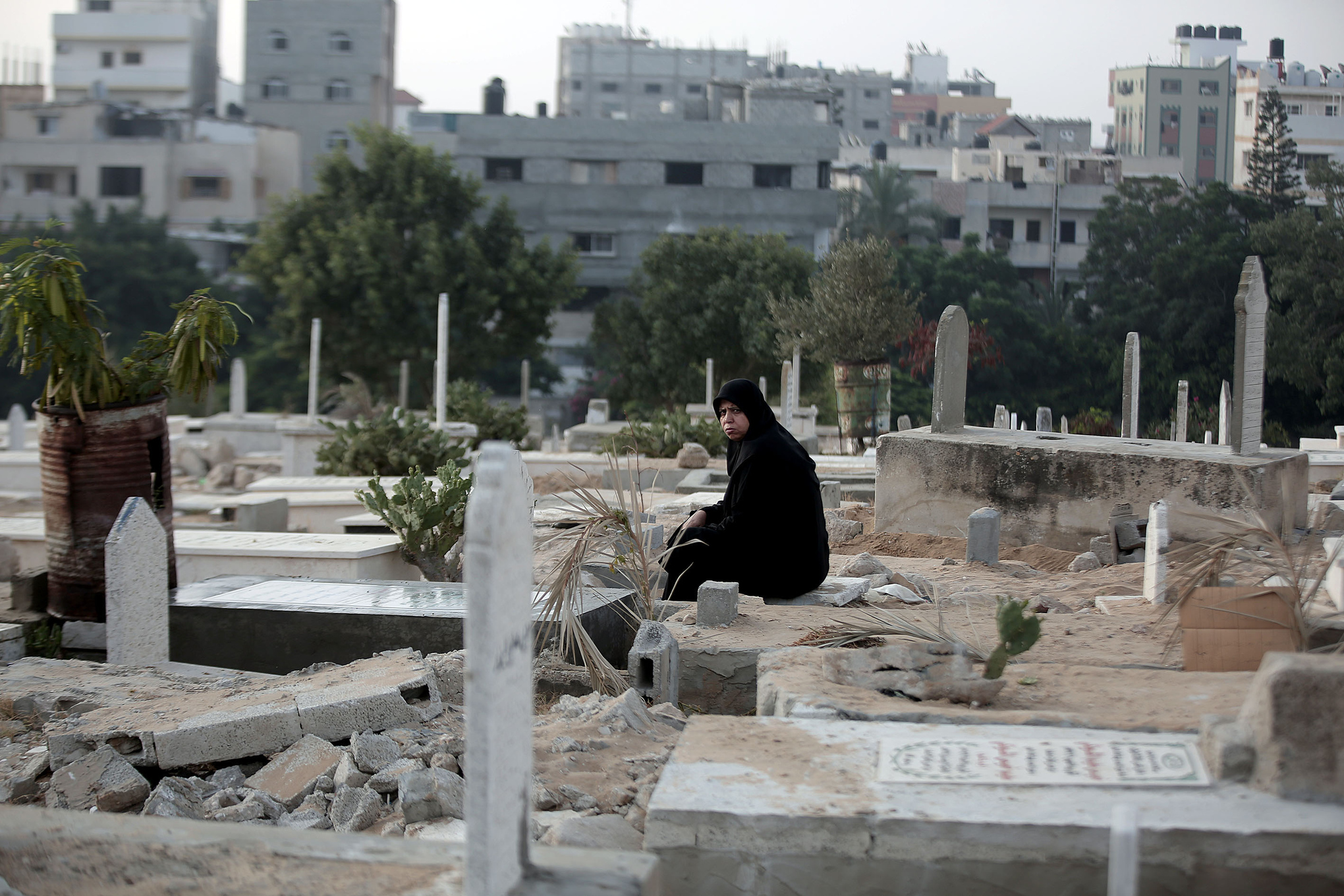 If you want to get angry about something, get angry about this: Israel has for years refused to change its strategy toward Gaza and the larger Israel-Palestine conflict, even though that strategy shows zero indication of yielding sustainable peace and leads Israel to occasionally invade Gaza to weaken anti-Israel groups there.

In this approach, Israel never fully makes peace with Gaza-based militant groups like Hamas, nor does it defeat them outright. The former would require at least an Israel-Palestine peace deal for separate states, which the current government is not really pursuing; the latter would require placing Gaza under a West Bank-style military occupation, which Israel did until it withdrew in 2005 and will likely not do again because it would be a disaster.

This leaves Israel to manage the conflict rather than solve it. In practice, that means tolerating a little bit of rocket fire, but periodically invading Gaza to degrade militant infrastructure and weapon stockpiles. It invaded last in 2009 and, unless Israel can find a way to change its approach (or unless Gaza militant groups unilaterally disarm), it was going to invade again sooner or later.

None of this is to deny that it matters a great deal whether Netanyahu was telling the truth when he blamed Hamas categorically for the murdered students, or whether he was papering over any internal Israeli intelligence disagreement on this question. He used that accusation to justify mass arrests, police sweeps, and other measures in the West Bank. Those events also led, however indirectly and potentially against the wishes of all involved, to a war that has so far killed over 1,000 people.

Still, in a much larger sense, in the view from 50,000 feet above the conflict, what may have mattered even more is that the conflict is structured in such a way that another war was likely going to happen whether Netanyahu blamed Hamas or not. To paraphrase the Brookings analyst Khaled Elgindy, the story here is not so much about the spark as about the kindling.