The weirdest Obamacare theory yet

Share All sharing options for: The weirdest Obamacare theory yet

MIT economist Jonathan Gruber's off-the-cuff comments about Obamacare's subsidies are the exception that proves the rule: they're getting so much attention precisely because they're the only example where anyone even appears to believe that Congress, without telling anyone, decided to turn Obamacare into an absolute disaster by withholding subsidies from states that didn't set up their own insurance exchanges.

They're getting more attention, in fact, than everything else Gruber has ever said or written about the law. This is a guy who cared so deeply about Obamacare's success that he literally published a comic book about it. His most important contribution to the Obamacare debate — technical simulations used by HHS that modeled how many people would get insurance under different scenarios — always assumed subsidies reached into every state. No journalist who interviewed Gruber (myself included) ever heard him mention that states that don't set up exchanges don't receive subsidies. He himself says he never believed that and the off-the-cuff comments were "speak-os".

This is like uncovering tape of Michael Bay saying there's nothing he hates seeing more in a movie than an explosion. It requires us to throw out pretty much everything Gruber has done publicly and instead believe that he thought dozens of states would be implementing Obamacare without subsidies — a nightmare of a policy outcome that would have given him a nervous breakdown — but the only times he ever mentioned it were at two Q&A sessions in 2012. 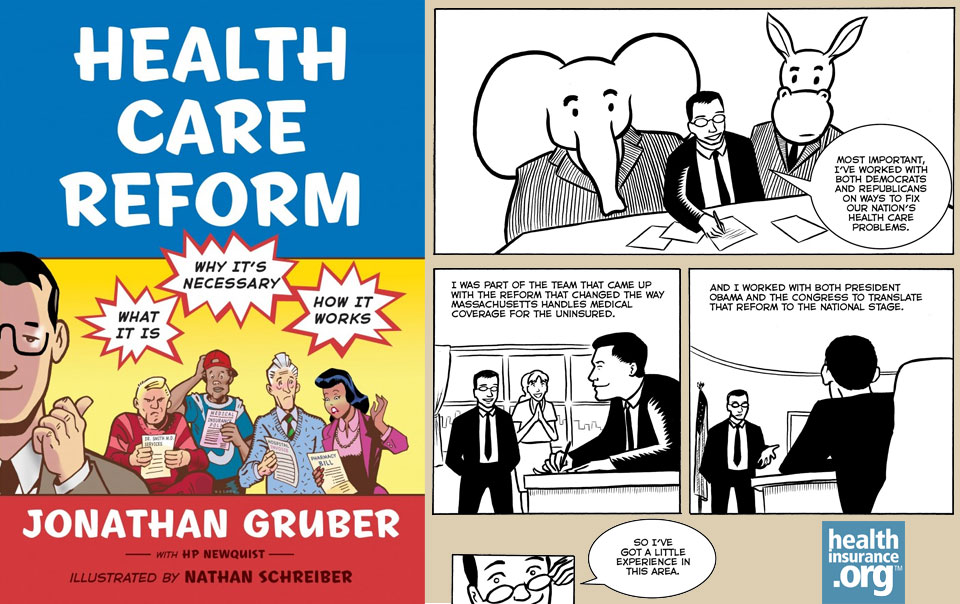 It would be much simpler if the argument about Obamacare could simply be about what it's actually about: some people believe the Patient Protection and Affordable Care Act is a good law. Others believe it's a bad law and they would like to see it repealed.

The problem is that the people who believe it's a bad law haven't won the elections necessary to repeal it. So they've turned, in desperation, to the courts. But the Supreme Court doesn't strike laws down for being bad. It strikes them down for being unconstitutional, or incomprehensible. And that's forced Obamacare's critics to make some very weird and very weak arguments.

The Halbig challenge has led to one of those arguments. There's a version of this challenge that makes some sense. The argument is that Democrats, in their haste to pass the bill, worded a key sentence poorly. Congress's intent is perfectly clear in the law but the Supreme Court's five Republican appointees should rely on a "plain text" reading of the law as an excuse to gut the bill. (As is often the case in legal fights over politically polarized topics, opinions on the legal question are driven by opinions on the political question: I have yet to find anyone who believes the Supreme Court should rule for Halbig who doesn't also believe Obamacare should be repealed.)

This is less a serious theory about Obamacare than an attempt to pull off a Jedi mind trick.

But Obamacare's opponents don't feel very good about making that case. It sounds too much like winning by cheating. And what are conservatives who previously condemned "legislating from the bench" to say if the Supreme Court's five Republican appointees overrule Congress's clear intent so they can take health-insurance subsidies away from millions of people?

And so a stronger version of the Halbig claim has emerged: that Congress really did intend to withhold subsidies from states that didn't set up their own exchanges — they just didn't tell anybody or ever debate it, no journalists or health wonks found out about it during the legislative process, and no one involved in the writing of the bill thought to mention it while Obamacare was being implemented. This is less a serious theory about Obamacare than an attempt to pull off a Jedi mind trick.

This stronger version of Halbig was mostly ignored until Gruber's comments: his remarks are the first that even plausibly seem like they back this thesis, despite the fact that they're not reflected in any of Gruber's work and Gruber says he misspoke.

But then the point isn't that anyone actually believes the stronger version of the Halbig claim. Rather, there are a lot of people who believe Obamacare is a bad law, and right now, pretending to believe the more ridiculous version of Halbig seems like the most promising path to wounding it. And so here we are.