After the massive scandal at the US Department of Veterans Affairs, Congress reportedly reached an agreement on how to the fix the nation's publicly run health-care system for veterans — despite concerns that both sides would fail to set a deal after negotiations stumbled.

Negotiations between Senate Democrats and House Republicans seemingly broke down on Thursday, July 24, as both sides held dueling press conferences accusing each other of bad faith.

The negotiations appeared to be on much better ground as of the weekend, with staffers from both sides resuming discussions. House VA Chair Jeff Miller (R-FL) and Senate VA Chair Bernie Sanders (I-VT) also agreed to fly back to Washington, DC, if it would push the negotiations forward.

On Sunday, July 27, congressional staffers confirmed they had reached a deal. Neither side disclosed details of what, exactly, the final compromise will look like. A joint press conference scheduled for Monday will presumably lay out the details of the plan.

"I can say that an agreement has been reached to deal with both the short-term and long-term needs of the VA," said Michael Briggs, a spokesperson for Sanders.

The debate centered around how Congress should fix a VA health-care system that simply doesn't have enough doctors and staff for the number of patients it sees every year. The lack of capacity is one of the reasons schedulers and administrators in Phoenix and at other VA hospitals around the country manipulated records. The falsified reports made it look like VA hospitals were still hitting goals, which were linked to bonus payments, for seeing patients in a timely manner.

Before Congress reached a deal, they had to work through one remaining hurdle: funding.

The debate focused on money 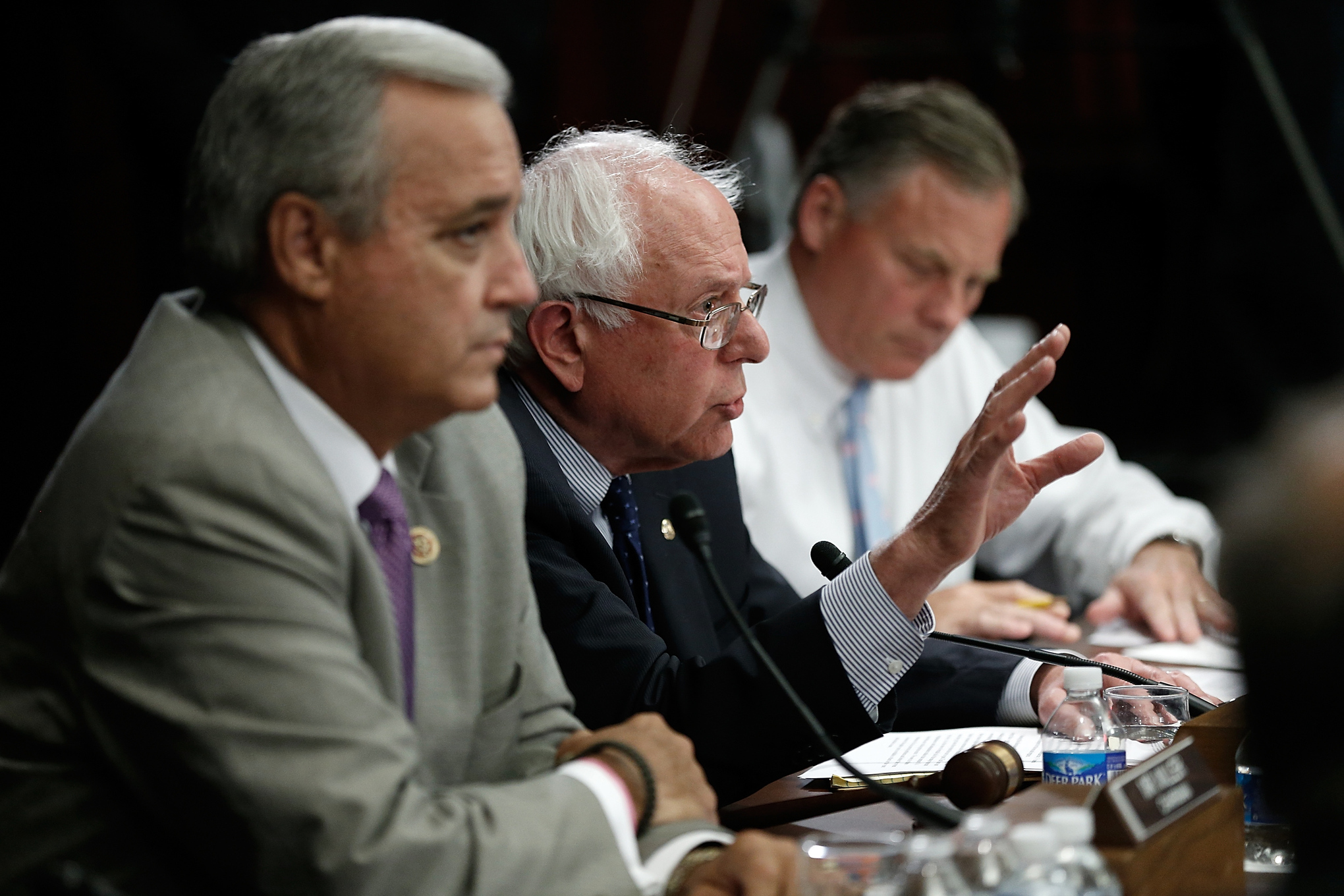 The Congressional Budget Office estimated that the bill passed by the Senate would cost $35 billion. The final cost will likely change in the final bill, but the high CBO estimate gives a rough idea of just how much money was being debated — and why a highly budget-conscious Congress had so much trouble reaching an agreement.

On Thursday, Miller released what he framed as a compromise between the original House and Senate proposals. The bill would, among other changes, fund a $10 billion, two-year pilot program that would let veterans get private care outside the VA system, allow the VA to hire more doctors, and establish more accountability measures.

But the bill didn't include the full $17.6 billion in funding requested by the VA. The VA said the funds would help expand its infrastructure and hire new staff, including doctors, to get ahead of a surge of veterans coming home from wars in Iraq and Afghanistan.

"if there's one thing we've learned over the last few months, it's that we can't trust VA's numbers"

Sanders spokesperson Briggs said the senator doesn't necessarily want the final compromise to include all of the VA's requested funding, but he would like to see at least some of it in a compromise.

House Republicans, a staffer said, would prefer to see the additional funding requested by the VA dealt with in separate discussions about broader budget bills. Republicans haven't decided whether the request is too much, but they would like more time to work through the issue in separate budget negotiations to see what justifies such a big increase in funds and how the money should be appropriated.

Miller put it more candidly in a recent statement: "I am committed to giving VA the resources it needs to provide our veterans with the care and benefits they have earned. But if there's one thing we've learned over the last few months, it's that we can't trust VA's numbers. That includes the $17.6 billion in additional funding Acting Secretary Sloan Gibson asked for today."

No one expected to be completely happy with the final bill 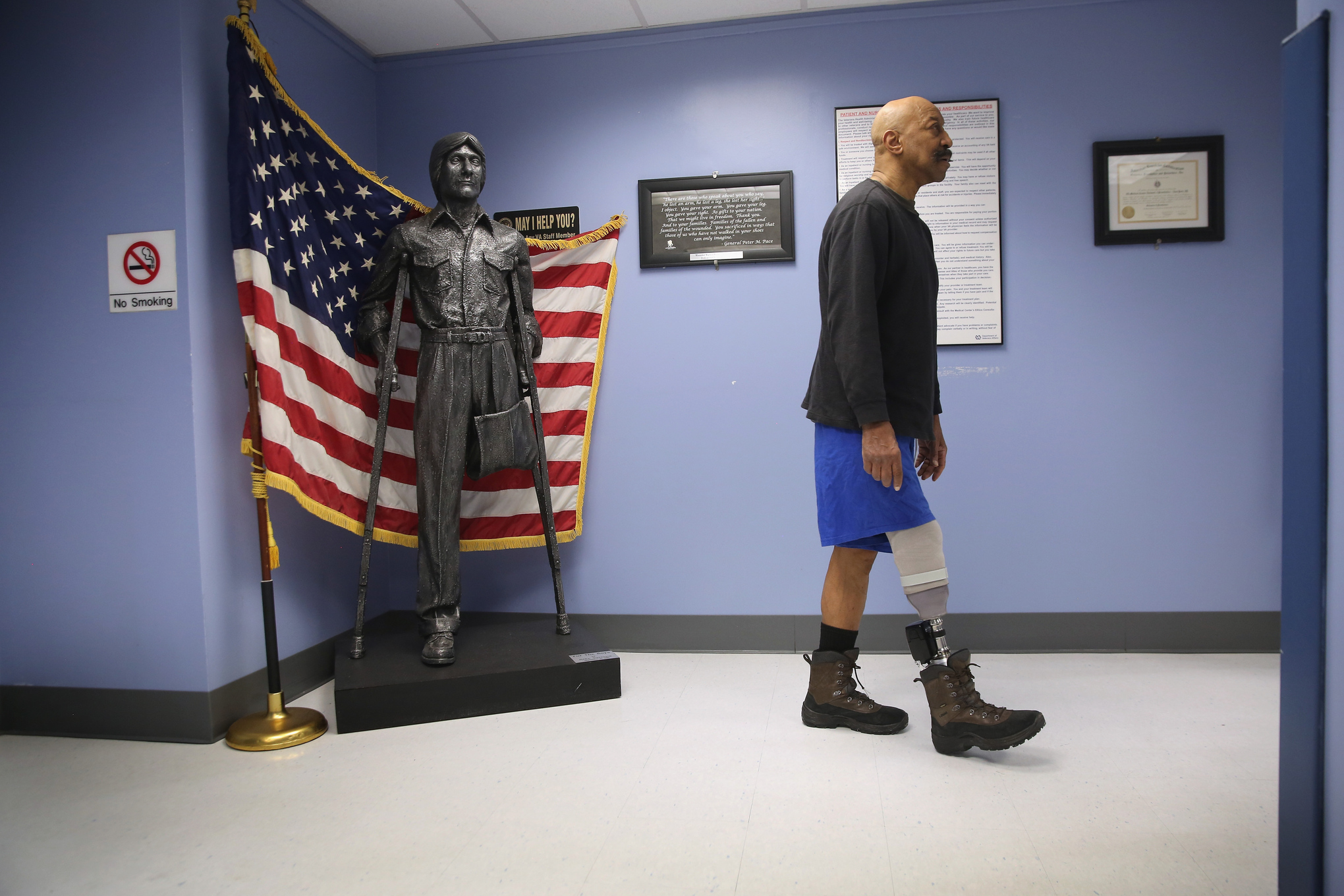 A military veteran walks after having his prosthetic leg serviced at a VA hospital. (John Moore / Getty Images News)

Prior to reaching a deal, both sides said they would each need to ultimately give something up if they were to reach a deal in time for the August recess.

"We're trying to reach a middle-ground that probably nobody will be completely happy with," Briggs said, "but it will do a lot of good for the VA and for veterans."

Some veterans advocates, meanwhile, don't like the idea of putting veterans into private care. As they see it, veterans are multifaceted patients with all sorts of injuries, both mental and physical, that need a comprehensive, specialized approach that the VA is built to take on. The private system, on the other hand, is structured more for an everyday patient that might deal with fewer physical and mental health problems.

"I'm not sure that our members would benefit greatly from this legislation," Carl Blake of Paralyzed Veterans of America said. From Blake's perspective, veterans with major disabilities, like those his organization represents, are never going to find the kind of care they need at a private hospital.

A major concern for veterans groups is that Congress will enact the two-year pilot program for private care, assume the VA's problems have been fixed, and leave the system to deteriorate after the pilot program ends. That, veterans advocates argued, would leave the VA worse off than it is today, because the pilot program would expire at a time more veterans from Iraq and Afghanistan will be entering the system.

Joe Violante, national legislative director for Disabled American Veterans, said adding more funding to the system, as veterans advocates have recommended for years in independent budget proposals, is key to a successful bill that will leave the VA in better shape. He argued, "If they're not going to ensure that there's funding available for the VA to expand during these two years, … I'd rather see them do nothing at this point."

Congressional staffers confirmed on Sunday, July 27, that Congress will do something, although the details of the deal weren't disclosed. As they see it, the final compromise might not satisfy everyone, but it could help alleviate a system that's been clearly strained by too many patients, too few doctors, and misguided regulations for years.

Update: This article was updated to reflect the announcement of a deal on Sunday.