Share All sharing options for: This map shows Europe’s dependence on Russian gas

Even after the crash of MH17, Europe has been slow to impose more sanctions on Russia for its involvement in the Ukraine crisis — particularly against the energy exports that make up such a huge chunk of Russia's economy.

This map of European gas pipelines, from The Economist, helps explain why: 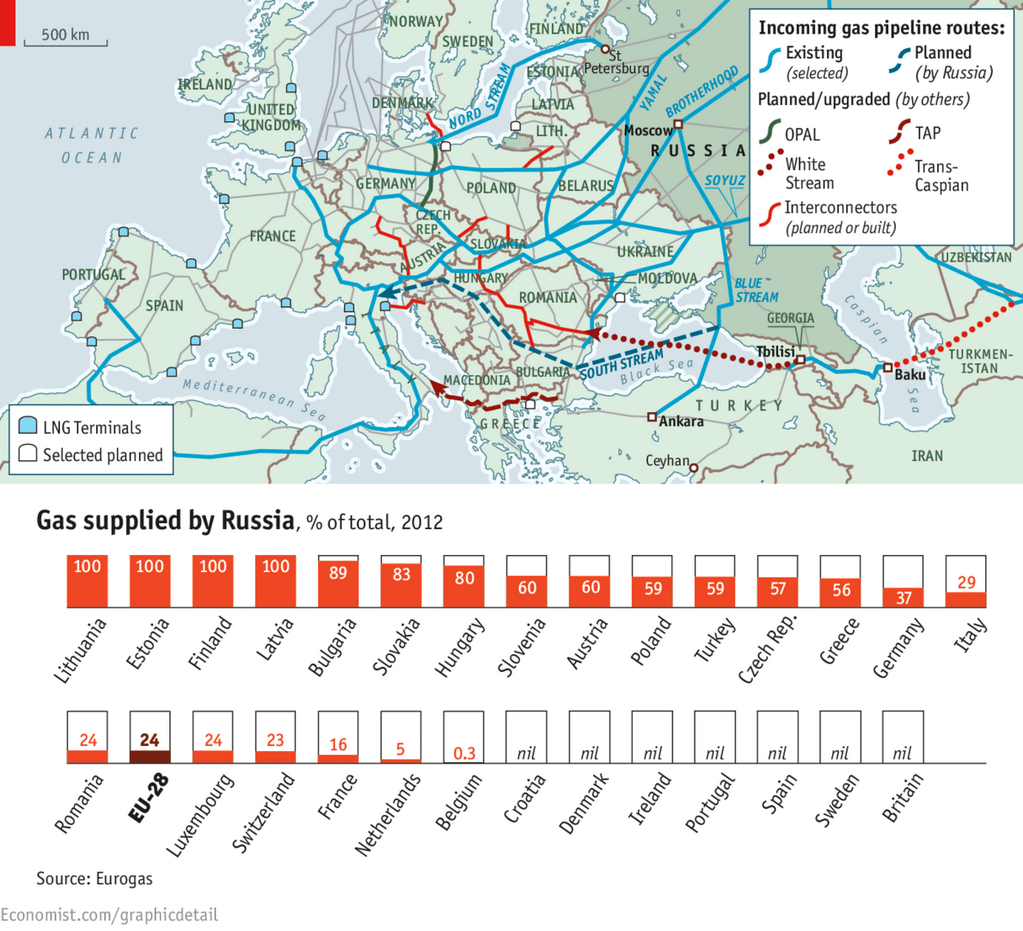 Germany's reliance on Russian gas is one of the reasons why, as Vox's Matt Yglesias explains, Europe is having a tough time agreeing to new sanctions. The UK, which doesn't import Russian gas, wants to sanction Russia's gas exports. Germany disagrees, preferring a ban on military exports from Europe. France, which takes in Russian gas (but less than Germany) and plans to sell naval ships to Russia, would rather the UK seize Russian assets stored in London. All of that disagreement between major European powers has led to slow, messy negotiations.

Ironically, countries in eastern Europe that are the most reliant on Russian gas exports — such as Poland and the Baltic states of Estonia, Latvia, and Lithuania — tend to be more bullish on sanctioning Russia because they see it as a more direct threat.

The problem is further complicated by the location of Russian gas pipelines. As the map above shows, much of it flows through Ukraine. If the conflict there grows worse, there's a chance Russia might feel compelled to shut off pipelines in the country — especially since Ukraine is already billions in debt to Russia for gas — which it has done in the past. Russia could shift to other gas routes if it shuts down Ukraine's lines, but the shutdown could still prove disruptive and it would likely cripple the Ukrainian economy at a time of war.

Over time, Europe could wean itself off Russian gas. But analysts believe that could take a while, since no current source of gas is as accessible and cheap.

Europe's economy, like much of the world's, isn't in the best shape right now. It's little surprise, then, that Europe is cautious about doing anything that could hurt its economy. When it comes to punishing Russia, the continent is trying to find a way to have its cake and eat it too.