What is female genital mutilation, and why is it such a big problem?

Share All sharing options for: What is female genital mutilation, and why is it such a big problem?

Here are seven facts to know.

Female genital mutilation (FGM) is a surgery that intentionally alters the female genital organs of young girls for non-medical reasons. Girls tend to be very young when the cutting happens, it's not voluntary, and it's associated with many horrible health effects. For these reasons, FGM—sometimes referred to as female circumcision—is roundly condemned by major aid and health groups as a violation of human rights.

The reasons for FGM are varied, but most have to do with cultural and social mores related to femininity and preserving girls for marriage. In that context, FGM is construed as being beneficial and a rite of passage. It's also seen as a way to protect women from promiscuity, since the genitals contain many nerve endings that enhance sexual pleasure, and cutting them blunts the libido.

International humanitarian agencies and aid organizations — from the UN to Médecins Sans Frontières — regularly speak out against the procedure.  President Obama has called for the elimination of the practice. FGM reflects inequality between the sexes, according to the WHO, and MSF condemns its harmful medical consequences and "the lack of respect for women's rights it presents." In 2012, the UN General Assembly adopted a resolution to end FGM.

There are four types of FGM: from the removal of part or all of the clitoris, to the entire removal of the labia (or outer lips around the vagina), to "infibulation" which is the narrowing of the vaginal opening by creating a seal using skin from the labia.

The health effects of FGM

There are no health benefits from this operation but there are many immediate risks, including death. Women can be left haemorrhaging, with severe pain, wound infections including tetanus and gangrene, or blood-borne infections such as HIV and hepatitis B and C. Sometimes it affects a woman's ability to urinate or disrupts her bowels. According to the UK's National Health Services, there are a range of long-term health problems associated with cutting:

Where this happens right now

According to the Lancet, an estimated 125 million women and girls alive today in 28 countries have been cut. The practice most commonly takes place in Middle East and Africa, where more than three million girls may face the procedure every year. Though less common, there have also been reports of FGM occurring in the United States, the United Kingdom, Australia, Canada, Denmark, France, Italy, the Netherlands, and Sweden. In the US, some 100,000 girls are believed to be at risk of getting the procedure.

Despite the prevalence of FGM in Muslim countries, it's not associated with any one religion, and though some Islamist extremists have adopted it, FGM is thought to pre-date Islam and is practiced by Christians in Africa, too.

FGM is prevalent in some African countries 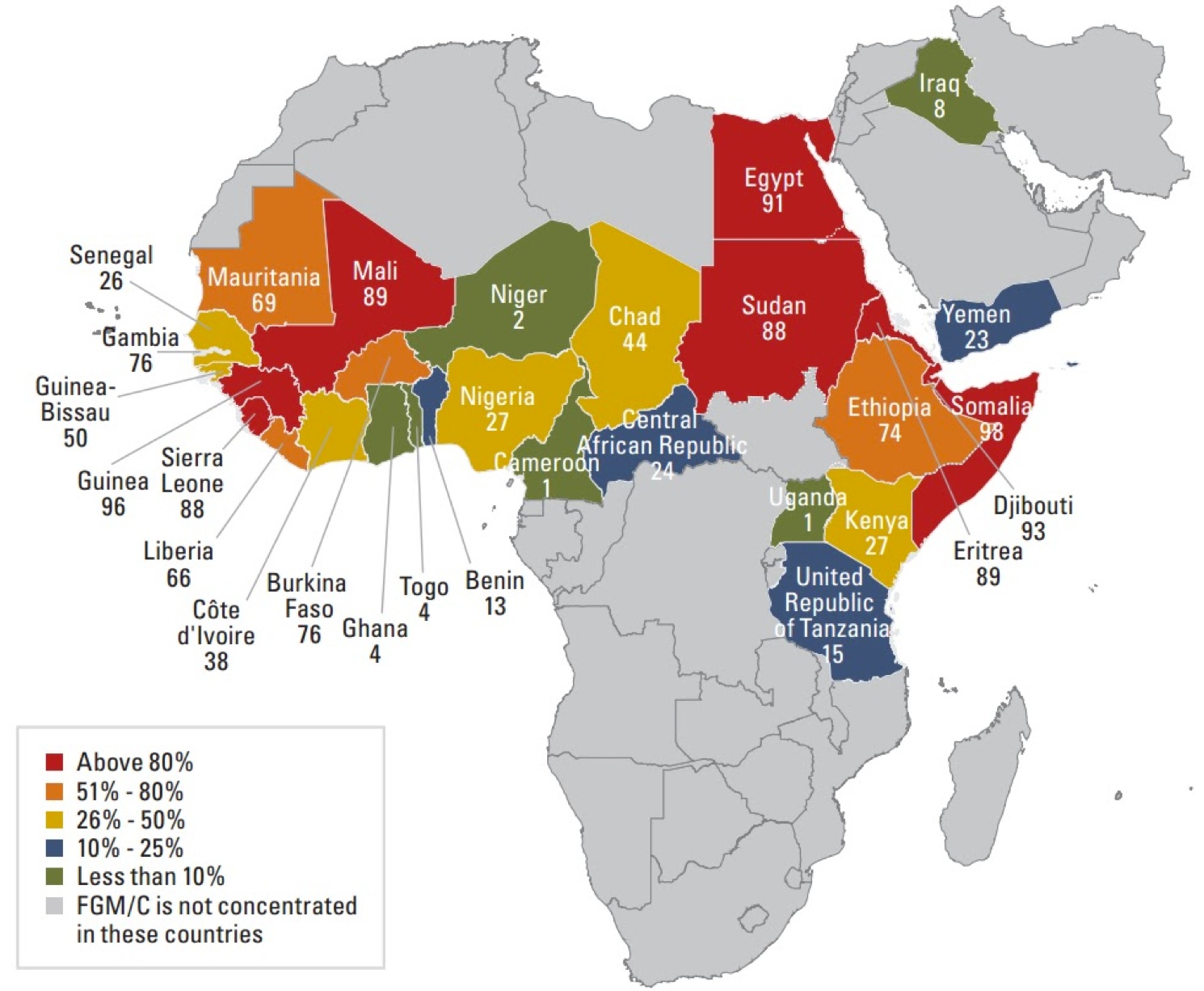 This map from Unicef shows the prevalence of FGM in the female population ages 15 to 49. The big takeaway is that while the procedure certainly happens in Iraq, it is relatively uncommon there compared to parts of Africa.

Can the surgery be reversed?

Who performs the FGM procedures

Typically, FGM is performed by traditional midwives who help with other medical tasks, such as helping with childbirth. They tend to be older women, according to Unicef. But there's a trend towards medicalization, the UK's National Health Service reported, and health-care providers are increasingly performing the surgery. In Egypt, it's mostly done by doctors whereas in Sudan, it's carried out by midwives and other health providers.