Here are America's most polarized, and most extreme, state legislatures

Share All sharing options for: Here are America's most polarized, and most extreme, state legislatures

At this point, it's pretty well known that the House and Senate are growing increasingly polarized on ideological lines, but information about what's going on at the state level is harder to come by. Luckily, the Georgetown's Boris Shor and Princeton's Nolan McCarty maintain a massive dataset on state legislatures' ideological standings from 1993 to 2013; that's a lot less than we have for national politics (the most-cited dataset there goes back to 1879) but it's still a lot to work with. Shor and McCarty have just updated the data to include 2013 data for all but a few states, so you can see how currently in-power legislatures compare to each other: 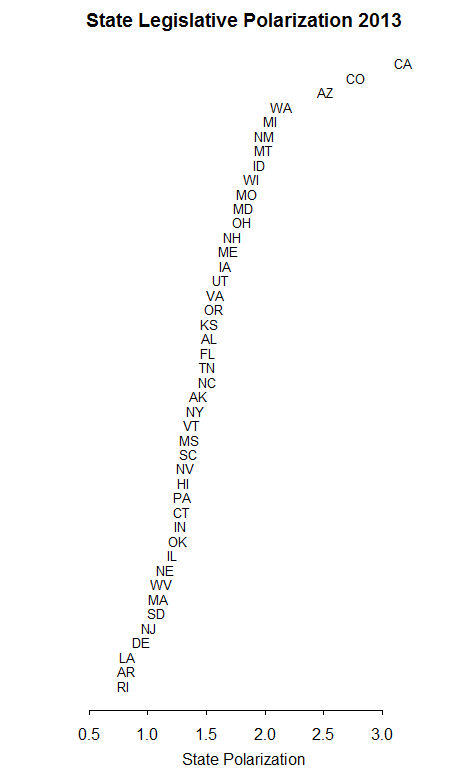 By far, California has the most polarized legislature of any state, with Colorado a distant second. Delaware, Lousiana, Arkansas, and Rhode Island bring up the rear, which isn't totally surprising; Delaware and Rhode Island have a long tradition of moderate to liberal Republicans, as do Lousiana and Arkansas with conservative Democrats.

"Most polarized" doesn't necessarily mean "most ideologically extreme"; the fact that two parties are far apart from each other doesn't imply that one of them is particularly out there. Indeed, New York has the most liberal legislature of any state by a considerable margin, even though it's in the middle of the pack polarization-wise: 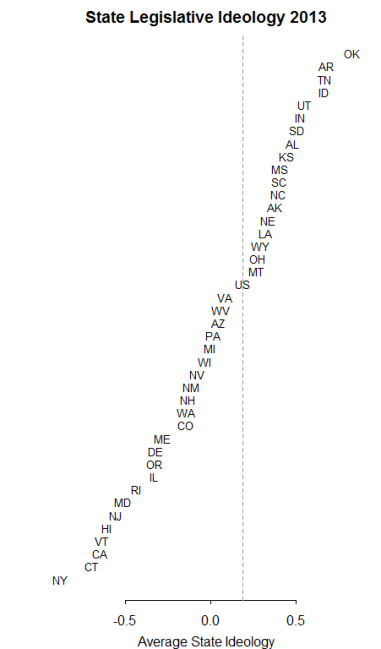 One caveat that it's important to keep in mind with numbers like these is that "moderate" scores on ideological measures can reflect both (a) views that are genuinely in the middle of the political spectrum and (b) people/institutions whose views include combinations of solidly liberal and solidly conservative viewpoints. For instance, a state legislature that passed both single-payer health care (like Vermont) and a very harsh bill targeting undocumented immigrants (like Arizona) would come up as "moderate" when its policy preferences aren't particular moderate, but just draw from both sides. UC Berkeley's David Broockman explained this phenomenon to Ezra Klein here.

Update: Shor argues that this critique isn't applicable for party elites; see this Twitter thread for his explanation. I certainly agree that it's less of an issue than for individual voters.