Map: The happiest places in America

Share All sharing options for: Map: The happiest places in America

If New York is so unhappy, why do so many people keep living there? That's one of the many questions at stake in a new working paper from the National Bureau of Economic Research.

Researchers from Harvard and the University of British Columbia used people's self-reported life satisfaction data from the CDC to try to determine a geography of American happiness. What they found is that among the biggest metropolitan areas, the Big Apple is the unhappiest. Scranton, Pennsylvania, takes the honor of the least happy metro area of any size. Meanwhile, Richmond is the happiest large metro area, and Charlottesville, Virginia, is the happiest of any size.

Here's a look at what that geography of happiness looks like, after researchers controlled for demographic characteristics like sex, race, and age. Blue represents the highest happiness measure, and red is the lowest. 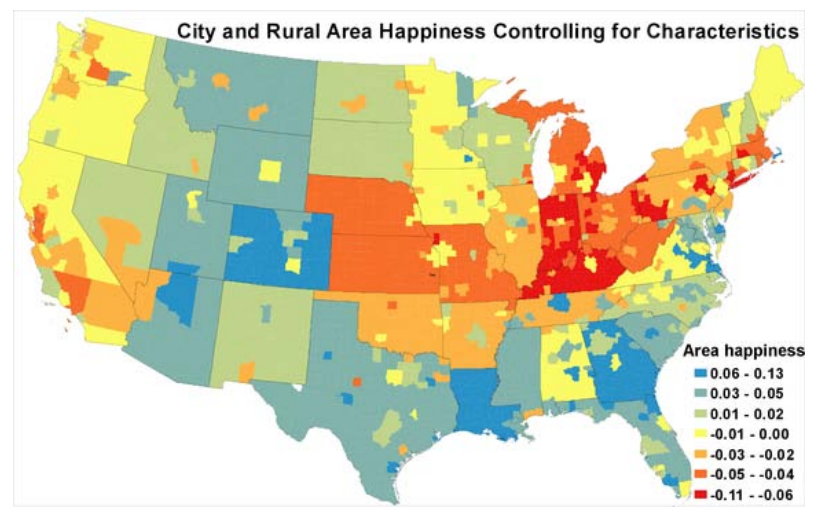 But wait — what if money buys happiness? Wouldn't richer areas naturally have higher happiness readings? To try to account for that, the researchers controlled for income. Doing that shows Montana and the South to be happier, income aside, and it alleviates some of the unhappiness in the Rust Belt. 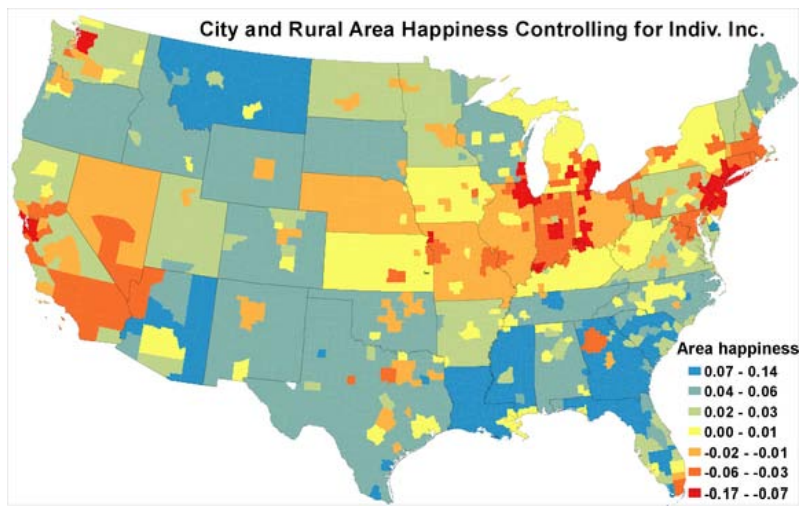 However, this map should be taken with a grain of salt, the authors caution: because income depends in part upon where a person chooses to live, and maybe even a person's happiness level, trying to subtract income from the equation can make for murkier results.

For example, the authors write, unhappiness is more concentrated in this map on Rust Belt cities. That doesn't mean those places are less happy; rather, it means that's their unhappiness that's unrelated to their income levels.

if people only sought out happy places, richmond would be swamped with people, and new york would be desolate

There's more to take away from this study than a list of which cities are winners and which are losers.

The data also carries in it an insight into how people make major life choices. If people only sought to live in happy places, cities like Richmond and Charlottesville, Virginia would be swamped with people, while New York would be desolate. Clearly, that hasn't happened.

"One interpretation of these facts is that individuals do not aim to maximize self-reported well-being, or happiness, as measured in surveys, and they willingly endure less happiness in exchange for higher incomes or lower housing costs," they write.

That said, places with low income growth and low population growth also tend to be particularly unhappy, both currently and historically.

"[C]ities that have declined also seem to have been unhappy in the past, which suggests that ... these areas were always unhappy — and that was one reason why they declined," write the authors.

The upshot seems to be that people make decisions based on happiness, but only on a limited basis. So at least in the economics world, there's more to life than being happy.

The dismal state of paid — and unpaid — leave in America