Trump is planning to roll back Obama's landmark bank regulations

Share All sharing options for: Trump is planning to roll back Obama's landmark bank regulations

The Wall Street Journal reports Friday morning that Donald Trump is planning an executive order that will lay out his intention to roll back the Dodd-Frank financial regulation bill that Barack Obama signed into law in 2010.

Spearheading the charge will be Gary Cohn, a former top executive at Goldman Sachs, and Treasury Secretary Steve Mnuchin, a former Goldman Sachs trader and hedge fund manager. And though Dodd-Frank has never been greatly beloved by the left or understood by the mass public, it's no coincidence that a new administration whose economic policy team is full of Wall Street types is determined to undo the law's work — bankers have always hated it.

And they've hated it with good reason. Obama didn't break up big banks or send major CEOs to jail. But he did sign a law that is making a real difference to how the financial system works — making it less crisis-prone and less profitable.

To many observers, detailed talk about specific Dodd-Frank provisions is beside the point. The ultimate failure of the law is that it's done nothing to dethrone finance from its pride of place at the commanding heights of the American economy.

1. The fundamental disappointment with #finreg is that it did nothing to change the trajectory of the econ away from financialization

This narrative gains plausibility from the reality that former Treasury Secretary Tim Geithner and other key economic policy hands have never particularly shared this objective. And many people remember reports from 2011 suggesting that finance had bounced all the way back as a share of the economy to where it was before the crash. But last year's revisions to GDP numbers by the Commerce Department challenge this conclusion. 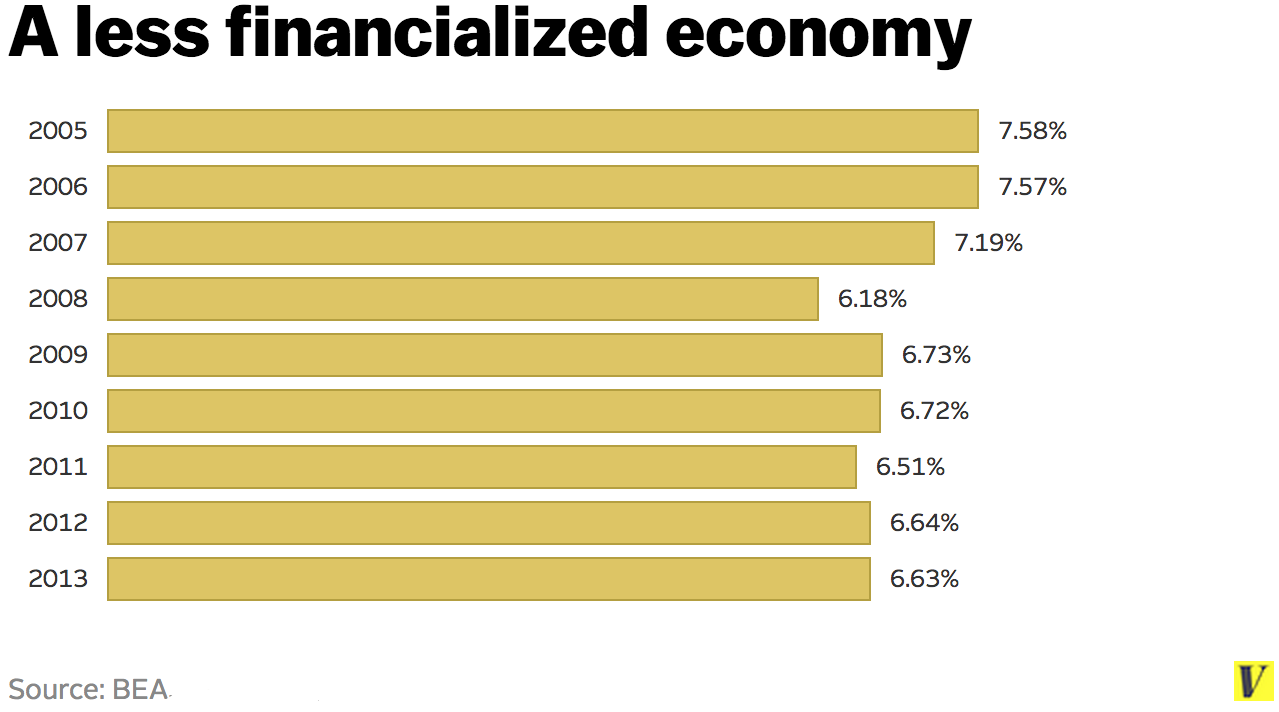 Finance as a share of the economy peaked in 2005, and declined with the housing bust through 2008. Then it bounced back somewhat, but suffered another setback. The magnitude of the change is not necessarily earth-shattering, but the trend toward an ever-growing financial sector really does seem to have been checked.

Shrinking overall size of finance is one thing, but financial reform was also meant to change how the sector made money. Even Obama seems to feel he's fallen short in this regard, telling Marketplace on July 3 that "more and more of the revenue generated on Wall Street is based on arbitrage — trading bets — as opposed to investing in companies that actually make something and hire people." He said he aspires to fix this, but that it's "unfinished business" and his inability to deliver on it shouldn't "detract from the important stabilization functions that Dodd-Frank were designed to address."

But Obama is being unfair to himself. He perhaps should have read Sital Patel's June 6 Marketwatch article "Banks shed jobs as fixed income revenue shrinks" (or a raft of similar stories in the financial press) about how trading revenue is falling at most major banks: 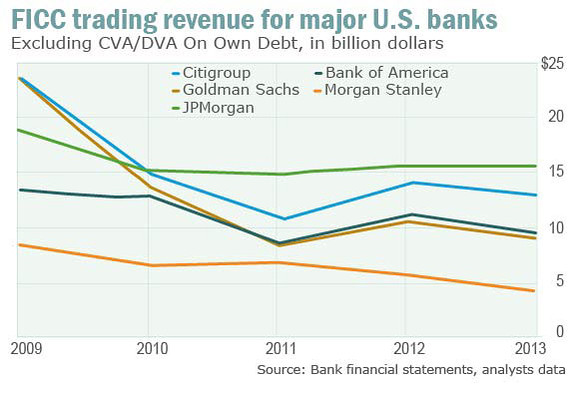 In fact, as Mark DeCambre wrote recently at Quartz, the only area of robust employment growth at large financial services firms these days is for lawyers and other regulatory compliance officers.

One could, if so inclined, read these facts as an argument against Dodd-Frank. Rather than employing people to engage in lucrative trading, banks are now employing people to deal with an avalanche of red tape from regulators. But to the extent that tying up banks in red tape and getting them to do less trading is what you want to see happening, the fact that it is in fact happening is a big deal.

The saving grace for investment bankers interesting in making money is that merger and acquisition activity is booming, which generates a lot of fees. But unlike trading, this definitely qualifies as providing help to companies that actually make something and employ people.

Most of all, Dodd-Frank appears to be succeeding in its core goals of making a financial crisis and a new round of massive bailouts less likely. Mike Konczal of the Roosevelt Institute recently listed four major victories in this regard:

It would be much too extreme to say that these four steps ensure there will be no further financial crises or bailouts. But they do substantially reduce the risks.

Fully repealing Dodd-Frank provisions would generally require 60 votes in the United States Senate, which is going to be a tall order. Under the circumstances, it's very unlikely that the law will be fully repealed — though specific revisions may be.

But while only time will tell in terms of exactly how far Trump, Cohn, and Mnuchin go, they can probably go pretty far. America's financial institutions are big, rich, and full of smart people. Staying on top of them in regulatory terms is challenging under even the best of circumstances. If regulatory agencies are run by political appointees who don't really want to hold banks to a tough standard, then they probably won't be.

And unlike with some other kinds of regulation, if banks are allowed to engage in excessively risky behavior, there will be few if any immediate victims. Profits will soar, loans will flow, wonks will complain, but ordinary people won't really notice. Bank regulation was extremely lax for most of George W. Bush's term in office, and it was fine. Until one day it suddenly wasn't, and the world was plunged into financial crisis.