Share All sharing options for: 5 reasons HIV is on the rise among young gay and bisexual men

HIV is on the rise among young gay and bisexual men.

A 2014 study from the Centers for Disease Control and Prevention found annual diagnoses of HIV among men ages 13-24 who have sex with men rose by 132.5 percent between 2001 and 2011 — a much higher increase than the trend among older gay and bisexual men, and quite stark from the one-third drop in diagnoses among the general population. Previous CDC studies also found a 22 percent increase in new annual HIV infections among these men between 2008 and 2010, and youth aged 13 to 24 accounted for more than one in four new HIV infections in the US in 2010.

Getting to the bottom of this troubling trend is a major interest for public health advocates. I reached out to Amy Lansky, an HIV researcher at the CDC, to understand the factors behind the rise. Here are some of the possible explanations, all of which have the potential to compound each other, and the evidence behind them.

The prevalence of HIV in gay and bisexual communities creates a bit of a vicious cycle: since HIV is more common among men who have sex with men, a gay or bisexual man is much more likely to contract HIV from his partner and, as a result, spread the disease even further to other men.

These problems are further driven by a lack of knowledge, particularly among young men. A CDC survey of high school students found nearly 60 percent of young people with HIV are unaware of their infection, which makes them much less likely to take the proper precautions.

The demographics, forms of transmission, and lack of awareness work together so gay and bisexual men are a lot less likely to get away with other issues, such as risky sexual practices, that increase their exposure to HIV.

The two most basic steps to preventing an HIV infection, beyond abstinence, are to limit the number of sexual partners and use a condom. But research shows young gay men are much less likely to practice safe sex.

A review of several studies found young gay and bisexual men are more likely to report drug use. This can increase exposure to HIV in two major ways: First, needles are the riskiest way to transmit HIV outside of sex. Second, people who use drugs before sex are more likely to engage in risky sexual behaviors, like not using a condom.

To that end, the CDC survey of high school students also found that young gay and bisexual men are much more likely to report injecting illegal drugs and using drugs or alcohol before their last sexual intercourse encounter. 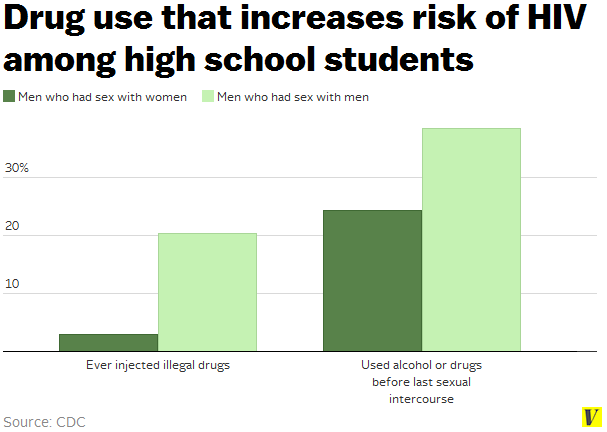 Surveys show that people living with HIV still experience high levels of stigma and discrimination due to the disease, and those reporting the highest levels of stigma also report poor access to care. The stigma, in other words, correlates with less medical care for HIV.

"There's issues around stigma and homophobia," Lansky says. "That might deter some young men from seeking HIV prevention services and testing."

This stigma can also apply in the other direction. In a 2011 survey from Janssen Therapeutics, black doctors, who are more active among black communities in which HIV is more prevalent, said three of five barriers to offering routine testing for HIV are related to social stigma. In particular, physicians said they're concerned patients may perceive the recommendation to test as accusatory or judgmental.

Among men who have sex with men, the youngest population saw the largest increase in annual HIV diagnoses by far. But the change in HIV diagnoses varied among older age groups.

"I don't think it's really clear why we're seeing different patterns across different age groups," Lansky says. "But we do know some of the things that I think in particular are affecting the younger men."

One explanation commonly voiced by other HIV/AIDS experts and advocates is that younger populations are less likely to know the dangers of the disease, because they weren't around during the height of the HIV epidemic in the 1980s and early 1990s. During this era, the disease quickly spread throughout the world, and few treatment and prevention options were known. The disease ravaged the gay community in particular, infecting and killing millions.

There's also some reasons to be skeptical of the theory. While it's true new HIV diagnoses saw the largest increases among the youngest of gay and bisexual men, new annual diagnoses also rose among populations 45 and older. This group was around for the HIV/AIDS scare, but that didn't lead to less diagnoses.

The theory also rests on the idea that younger people would be less worried about HIV, because they simply don't know well enough to be aware of its risks. But in a 2012 survey from the Kaiser Family Foundation, more young adults reported being personally "very concerned" about being infected with HIV and getting tested than the overall adult population.

Given the CDC's condom use data, the Kaiser survey and latest CDC study don't definitively rule out the theory. Young adults, for instance, might be reporting their thoughts but not their actual behaviors and actions to Kaiser. The Kaiser survey also looks at all adults; it's possible young men who have sex with men would report different levels of concern and testing.

Like all the other risk factors, this issue needs more study if public health workers want to stop what could turn into a new epidemic. With the new CDC study, Lansky and others hope to provide a first step.