The deadliest Ebola outbreak in recorded history is happening right now. And now the Liberian government has confirmed that a senior doctor working to fight the disease, Samuel Brisbane, has died, the Associated Press reports. That makes him the first Liberian doctor to die of Ebola in the current outbreak.

In addition, an American doctor has been infected. Kent Brantly, a 33-year-old working for American aid organization Samaritan's Purse, has been treated and is in stable condition, according to USA Today.

This news comes just days after an announcement that the top Ebola doctor in Sierra Leone, Sheik Umar Khan, had been infected.

Brisbane's death is an unfortunate blow in a long battle that doesn't look like it's slowing down.

Liberia is one of several countries battling the current outbreak, which is unprecedented both in the number of cases and in its geographic scope. It's now hit four countries: Sierra Leone, Guinea, and Liberia have been joined by Nigeria, which this week saw its first case, after an infected Liberian man flew to the Nigerian city of Lagos, which is also Africa's largest city. There are also fears the disease has spread to the country of Togo, where that man's flight had a stopover.

And the virus — which starts off with flu-like symptoms and often ends with horrific hemorrhaging — had as of July 23 infected 1,201 people in Sierra Leone, Guinea, and Liberia, and killed an estimated 672 since this winter, according to the numbers from the World Health Organization.

Ebola is both rare and very deadly. Since the first outbreak in 1976, Ebola viruses have infected thousands of people and killed about one-third of them. Symptoms can come on very quickly and kill fast: 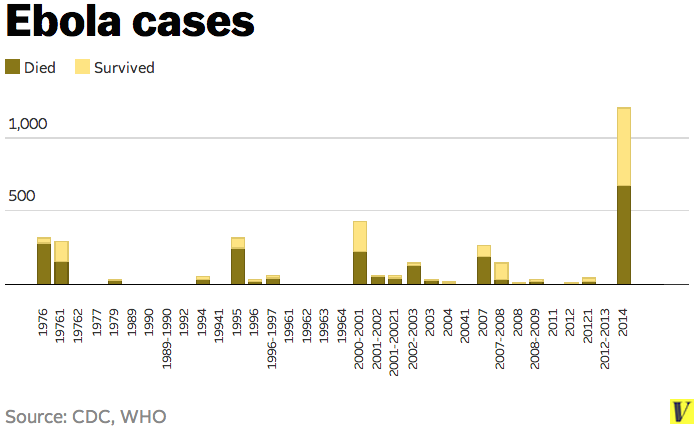 Each bar here represents a different Ebola outbreak. This data is what the CDC has on record. Not every case or death always gets officially recorded, so there is always some wiggle room in numbers like these. 2014 is estimate of the current outbreak as of July 23, 2014 from the WHO.

The current outbreak started in Guinea sometime in late 2013 or early 2014. It has since spread to Sierra Leone and Liberia, including some major capital cities. It's the first time Ebola has ever reached a state capital.

First, this outbreak concerns the most deadly of the five Ebola viruses, Zaire ebolavirus, which has killed 79 percent of the people it has infected. (The virus is called that after the formerly named Zaire, which, along with Sudan, experienced the first Ebola outbreak back in 1976.)

A World Health Organization assessment in Liberia noted problems with tracing patients' contacts with other people, "persisting denial and resistance in the community," and issues with "inadequate" measures used to prevent and control infections, weak data management, and "weak leadership and coordination," according to a statement released on July 19.

The Ebola viruses known today don't spread from person-to-person well enough to have much risk of causing a wide pandemic across several continents. The risk of Ebola coming to the US is very low.

Updated. This article was updated on July 27 to include news on Brisbane's death and Brantly contracting the virus. It was also corrected on July 28 — originally, Brantly's name was listed as Keith, not Kent, as a result of an update written by Danielle Kurtzleben. On July 28, updated the first chart with newest case count numbers.