Share All sharing options for: Guam, Halbig and Obamacare disasters

The American territories ended up playing a weirdly pivotal role in yesterday's Halbig decision against the Affordable Care Act. The D.C. District Court cited the mess that Obamacare created in the territories (and a story I wrote about that mess last December).

As to why the Northern Marianas Islands were turning up in a case about health insurance subsidies on the mainland, they were used to push back against one of the Obama administration's main arguments. The White House has argued that of course they meant for every state to have subsidies because, without them, the law would be a monstrosity — and they had no intention of passing a monstrous law.

Justice Thomas Griffith pushes back on this point, arguing that the administration did pass a law that did create a monstrosity in the American territories (if you want more details about how terribly things were going in Guam because of Obamacare, read this). The key passage is here: 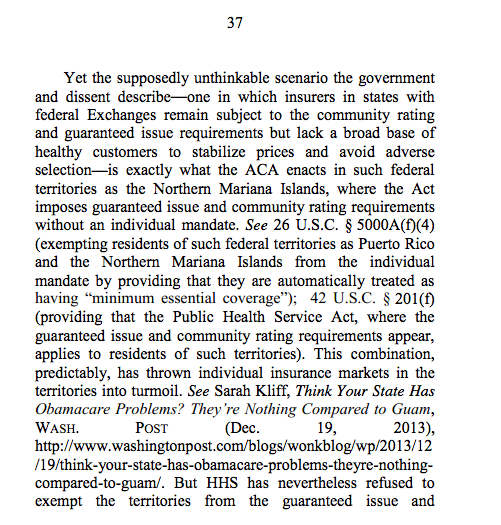 The D.C. Circuit Court ruling, however, leaves out a pretty big development in the territories' Obamacare crisis, one that happened last week. This is a point Brian Buetler makes over at the New Republic, citing some of my reporting:

Last week, Kliff wrote an update. "In letters sent July 16, the Obama administration notified territorial regulators that their residents would be largely exempted from health law requirements...perhaps most importantly the requirement that insurers offer coverage to all shoppers."

In other words, contrary to opinion of the court, the administration believes that absent subsides (and thus absent a broadly applicable mandate) the coverage guarantee has to go as well, leaving the law's explicit coverage goals well out of reach.

The Obama administration decided last week that the situation in the territories was unworkable and that they would end guaranteed issue in the territories. This was an about face for the White House, and its completely possible it happened after the Halbig decision was written. But the White House's new stance suggests that it did not intend for Obamacare to create unworkable insurance markets, arguably undercutting this particular point in the D.C. Circuit Court opinion.