I'm no lawyer, but from the first time I heard it the theory advanced by the plaintiffs in the Halbig case has struck me as laughably far-fetched and as best I can tell most objective legal observers agree that they are unlikely to prevail. But liberals should check themselves before falling back on the assumption that this is how the judicial system works, or even that we are capable of ascertaining what it is objective legal observers think or do. For a reality check, it's worth looking at yesterday's Halbig coverage on the National Review website: 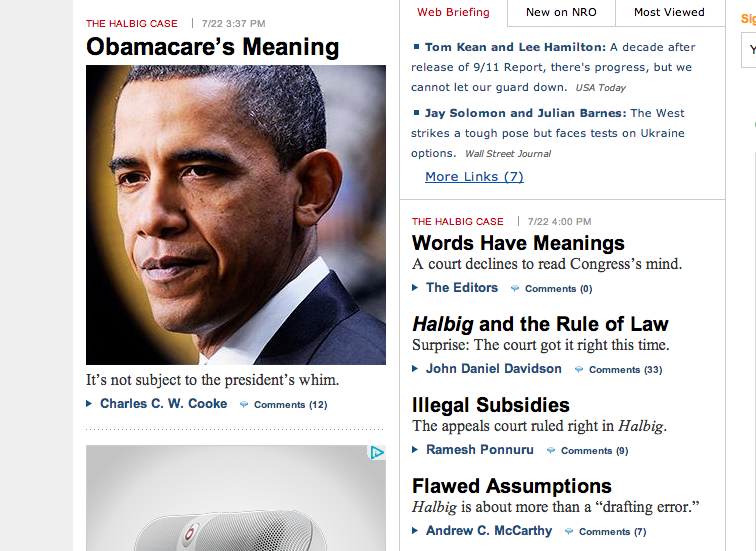 The coverage was extensive, unanimous, and included the participation of Ramesh Ponnuru, probably the magazine's most broadly respected writer. A Washington Examiner editorial hailed the ruling. The libertarian magazine Reason disagrees with the conservative mainstream about many issues including foreign policy and immigration, but their Affordable Care Act coverage is relentlessly hostile and their most-read article yesterday was a Halbig piece sympathetic to the the ruling.

The point is that, for better or for worse, as conservatives see it this case is not a close call and there are no doubts expressed that affirmation by the Supreme Court would be the right call.

The deep nature of the division is illustrated by the suspicious way in which legal opinions and policy preferences are lining up on this issue. Essentially everyone who believes the Affordable Care Act was an important step toward securing social justice also agrees that it would be absurd to construe the statute in a manner that's plainly inconsistent with congress' goals. And essentially everyone who believes it's crucially important to give the crucial sentence the most straightforward possible reading rather than defer to the IRS' efforts to make sense of the law as a whole, also believes that the law is a scandalous boondoggle.

In a less polarized political climate, the stakes of the legal decision would be much lower. You would expect members of congress to respond to the Halbig ruling by passing an amendment to bring the text into clearer alignment with its goals. And even if congress failed to do so, you would expect the vast majority of states currently using the federal exchange to simply switch to a state exchange in order to make their citizens eligible for subsidies.

In that kind of climate, opinions about Halbig would be driven by feelings about the best approach to statutory interpretation — a question about which almost nobody has strong feelings. But in our actual climate, upholding Halbig will render Obamacare non-operational in a great many states. And most people — especially politically aware people — have much stronger views about Obamacare than about edge cases in the world of statutory interpretation. Our tribal instincts are activated. 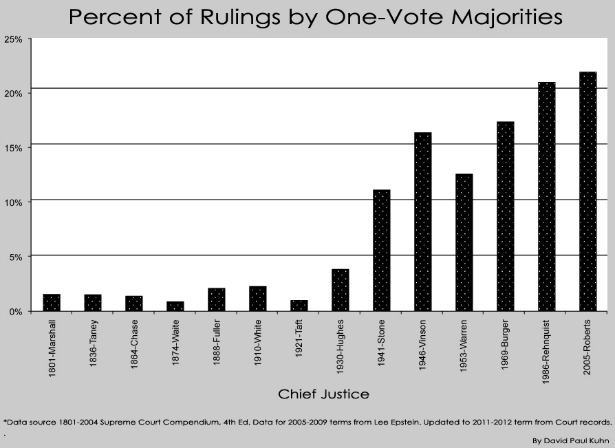 The judicial branch is supposed to operate separately from the contours of partisan politics. But judges are human beings, subject to the same cognitive failings as everyone else — and the cognitive failings associated with polarized political disputes are large. And the judiciary is becoming more polarized along with everything else in America. David Paul Kuhn, for example, has shown that 5-4 decisions have become drastically more common over time.

The Supreme Court gets to choose which cases it hears, and this shows a Court that is increasingly inclined to hear cases that sharply divide the justices — and therefore the legal community — rather than to rule on questions where there is broad consensus. The justices also seem increasingly inclined to write maximalist rulings that can secure minimum winning coalitions, rather than to enter into compromises to secure broader agreement.

Another sign of polarization is in the selection of clerks. In recent years, Justices appointed by Democrats have come to almost exclusively select clerks who worked for Circuit Court judges appointed by Democrats and Republican justices behave the same way. Rather than seeking to surround themselves with intelligent young aides of varying views who will challenge their knee-jerk opinions, Justices seek assistants who share their outlook. Institutions like the Federalist Society and the American Constitution Society operate to ensure that politically-active lawyers operate in separate intellectual and professional networks from an early age.

Overturning Halbig would be a betrayal

Vox's Ezra Klein mounted an argument that it's very unlikely the Supreme Court will affirm Halbig, citing the pragmatic reality that taking away health insurance from millions of people who already have it could be a political disaster. This makes a ton of sense to me. But as a forecast it would carry more credibility if we were seeing it on Fox News or The Wall Street Journal editorial page. Justice Scalia has gone so far as to say he doesn't read the New York Times or the Washington Post because they're too liberal, so it's not obvious that ideas circulating in the non-conservative press tell us much about the thinking of conservative judges.

After all, John Boehner and Republican governors could be spending this week working to avert this potential political fiasco by amending the law or switching off the federal exchange. But they aren't. So the idea that Halbig would be bad politics does not seem any more persuasive to most conservatives than the idea that it's bad law or bad policy.

All of which is to say that a decision by the Supreme Court to overturn Halbig would entail a substantial act of ideological apostasy by one or more justices. Apostasy isn't impossible. Justices Roberts committed a major betrayal by voting to uphold the Affordable Care Act's individual mandate, and Justices Kagan and Breyer committed one in the opposite direction (perhaps as part of a deal) to strike down some of its Medicaid clauses.

But acts of apostasy are psychologically, socially, and professionally difficult. It would be a mistake to simply assume Roberts will commit another one. And it would be an even bigger mistake for liberals to draw excessively broad conclusions from their own media diet. On the right, Halbig is broadly considered good law and five of the nine Justices side with the right most of the time.