Share All sharing options for: Chart: Even mediocre CEOs get huge pay packages

CEO pay is one of those topics that genuinely mystifies those of us with non-stratospheric salaries. What on earth could these people be doing all day that justifies millions of dollars per year? we ask ourselves. According to a new Bloomberg analysis, what they're not doing is sending their companies' stocks through the roof.

The analysis shows that plotting companies' ranks by stock performance by companies' ranks by CEO pay yields a scatterplot that is exceptionally, well, scattered. Here's a look at what they found, using data from Equilar (but find their nifty interactive version here): 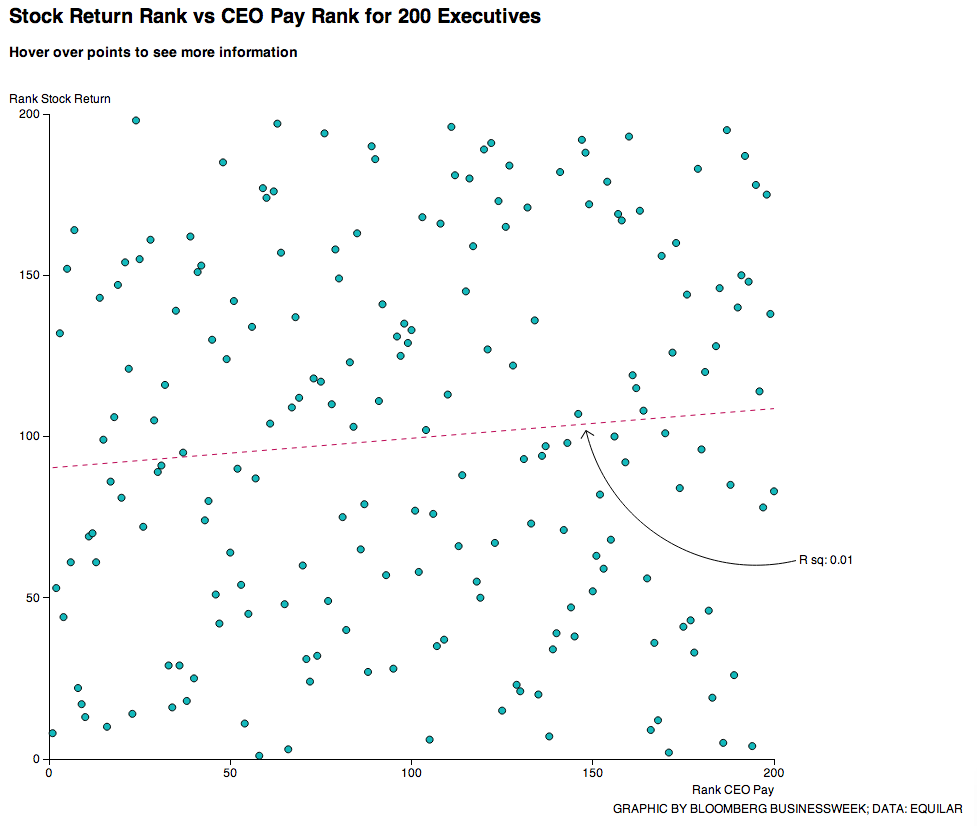 It's not just that Bloomberg finds a weak correlation between CEO pay and company performance; they find virtually no correlation.

Of course, this isn't the only examination of pay versus performance out there — lots of different researchers have come to a wide array of conclusions on this question. One recent study, for example, found that pay and performance are more tightly or loosely linked depending on how a company defines "performance."

Companies that paid CEOs based on total shareholder return, for example, actually saw their stock perform worse. So did companies that made any change in compensation metric. In other words, the link between CEO pay and firm performance appears to be highly idiosyncratic, and there's no identifiable overall principle that governs it.

But it's a bit easier to dissect why CEO pay has climbed so high. The Atlantic's Derek Thompson in December put together an excellent video explanation on what has pushed pay levels so high, linking it not only to the ever-increasing size and complexity of today's corporations but also the increasing use of stock options for compensation (and the above chart uses total compensation data, not just salary).