Republicans now 56% or maybe 86% likely to take the Senate

Share All sharing options for: Republicans now 56% or maybe 86% likely to take the Senate

With the midterm elections now about 3 and a half months away, the Upshot's Nate Cohn writes that a broad-based Republican wave does not seem to be materializing. But, as Cohn points out, the GOP doesn't necessarily need a wave to take the Senate. It just needs to pick off a few key races in a few key states, many of which are quite conservative. Yet there's some disagreement among the leading modelers about how good the GOP's chances are — and some important states have been very poorly polled. Here's the latest news and analysis about the battle for the Senate.

How likely is the GOP to take the Senate?

Most election analysts now give Republicans a slight edge. Since late May, the forecasts from the New York Times' The Upshot and the Washington Post's Election Lab have both moved a small bit in the GOP's favor. The Upshot's model then gave the Democrats slightly better odds of holding the chamber — but now gives Republicans a 56 percent advantage. Meanwhile, the Washington Post's model now gives the GOP a much better 86 percent chance of a takeover:

As in May, much of this discrepancy is because the Upshot's model is based mostly on polls, while the Post incorporates both polls and a broader set of national, state, and candidate-level "fundamental" factors into its model. Those factors — including Obama's weak approval, strong GOP fundraising, and the recent electoral history of the states with competitive races — look bad for Democrats overall. John Sides, one of the creators of the Post's model, argues here that some of these fundamentals might not yet be "fully baked" into polls of individual contests. (The Upshot uses its own set of fundamental factors as a component of its forecast, but weights them less heavily than the Post does.)

What are the key races?

Right now, there are 9 races that look competitive. The GOP needs to win 5 of them to take the Senate. We can think of these seats in two groups.

This map could still expand or contract. The GOP hopes its challenges to Democrats in Oregon, Virginia, and New Hampshire (where Scott Brown is running) will catch on, and some Democrats still hope to hold a Montana seat most think is lost. And in some currently-competitive states, one candidate could open up a runaway lead — Democrats hope Gary Peters' recent lead in Michigan will hold up, and take that state out of play. But for now, these 9 are the races to watch.

How could a GOP takeover happen?

Again, Republicans need to win 5 of those 9 seats. They can do so by winning just all 5 seats in red states. As you can see below, both the Upshot and the Post agree that the GOP's chances are good in each: 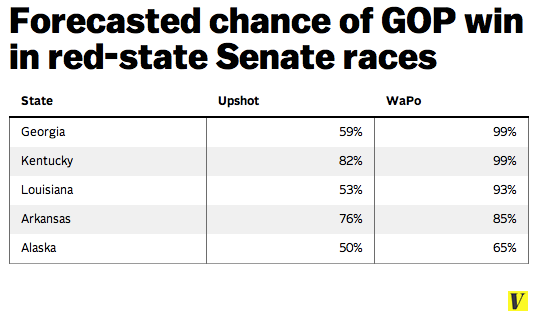 But the Post's fundamentals-based model predicts that 4 of these 5 races are already all but lost to Democrats, while the Upshot gives Democrats a fighting chance in several, as the recent polls do. The Post is especially skeptical of Democrats' chances in Georgia, where Michelle Nunn is running for an open seat, and Louisiana, where Mary Landrieu is running for a fourth term. Essentially, the Post is predicting that most of these Democratic candidates will be dragged down to earth by the national situation, and by the conservatism of their states. The difference in the models here isn't entirely because of polls, however — the Upshot simply has a different set of fundamental factors that they're looking at, a set that points to better odds for several Democrats. The Upshot's Josh Katz says in an email that his model's fundamentals-only forecast "gives Nunn a 37% chance to win."
However, if one or more of those red state Democrats does manage to eke out a victory, the GOP will be short of its magic number of 5, and will have to make up for it elsewhere. Here are the 4 other competitive races: 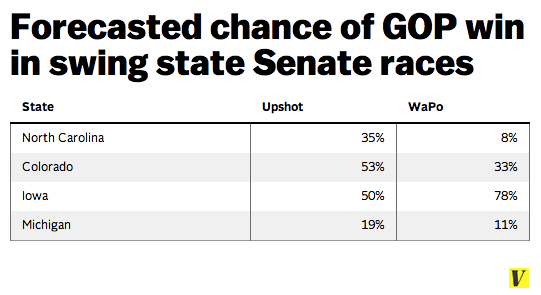 Both forecasts agree that the GOP's best chances are in Iowa and Colorado. But the Upshot reflects recent polls and calls both races toss-ups, while the Post's model gives Republicans a much better shot in Iowa, where state senator Joni Ernst (R) is challenging Rep. Bruce Braley (D) for an open seat. This is partly because the Post's model gives incumbents like Sen. Mark Udall (D-CO) a bonus. Both forecasts also give Sen. Kay Hagan (D-NC), long thought vulnerable, a clear advantage — which matches Reid Wilson's reporting that "internal polls for both Democratic and Republican groups have showed Hagan pulling ahead." And despite early hopes, Michigan may be slipping away from the GOP.

What don't we know?

In recent years, polling averages have proven pretty reliable. Yet this year, polling has been very sparse in several of the key races, and many of the polls that do exist might not be trustworthy. The Upshot's Nate Cohn diagnosed the problem here, writing, "The rapid growth of partisan polls has contaminated the polling averages." By his count, 65 percent of polls in competitive Senate races this year had a partisan alignment — and another 10 percent were by Rasmussen, which he calls "an ostensibly nonpartisan firm that leans conservative and has a poor record."
While the Upshot's model tries to correct for "house effects" in polls, there's so little data in some states that it's difficult to feel confident in poll-based estimates of what's happening. In particular, there have been no nonpartisan polls other than Rasmussen's all year in Louisiana or Alaska. For races with inferior polling, the Post's forecast weights the fundamentals more heavily — and it predicts that Sen. Mary Landrieu (D) is at a massive disadvantage in Louisiana, while Sen. Mark Begich (D) has a smaller disadvantage in Alaska.
In Arkansas, since several nonpartisan polls surprisingly showed Sen. Mark Pryor (D) ahead in April, one Rasmussen poll and two Republican polls have given his challenger, Rep. Tom Cotton (R) the lead, according to RealClearPolitics:

It's certainly possible that the race has moved toward Cotton, but without more reliable nonpartisan polling, it's difficult to feel confident that's the case. However, it's worth noting that the fundamentals in the Post's model tilt the race even more strongly to Cotton. The polling in North Carolina has also been highly partisan, though in this case the Republican pollsters have agreed that Sen. Kay Hagan (D) is slightly ahead, and the Post's model tilts the race even more strongly in her favor.

Right now, we still know quite little about what's happening in several important races.The key issue overall remains whether Democratic candidates, particularly those in very conservative states, can distinguish themselves individually and rise above an unfavorable political situation — or if, as the Post predicts, the fundamentals will bring most of them down in the end. Hopefully we'll soon get some better polling to clarify what's going on.
Update: Clarified that the Upshot also incorporates fundamental factors, and added information on the Upshot's Michelle Nunn forecast.