Why are iPhone sales skyrocketing while iPad sales keep falling?

Share All sharing options for: Why are iPhone sales skyrocketing while iPad sales keep falling?

Apple just reported its quarterly earnings, and while iPhone sales jumped 12.7 percent from a year ago and Macs were up 17.6 percent, iPad sales dropped for the second quarter in a row — down 9.2 percent from a year ago. There's basically insatiable demand for iPhones around the world, particularly in the BRIC countries, but people seem to have enough iPads. Just look at this sales chart from The Verge:

All these sales are cyclical, but that iPad trend is basically flat over time — and since all the leaks indicate Apple's about to launch new iPhones with much bigger screens, the case for having an iPhone and and iPad is about to get a great deal murkier. Why would you buy a phone with a 5.5-inch screen and a tablet with a 7-inch screen? You can certainly make a case for Apple's larger iPad Air, which I own and thoroughly enjoy, but the numbers don't lie: all the action's in the phone market. Here's another chart from Jackdaw Research published at Business Insider: 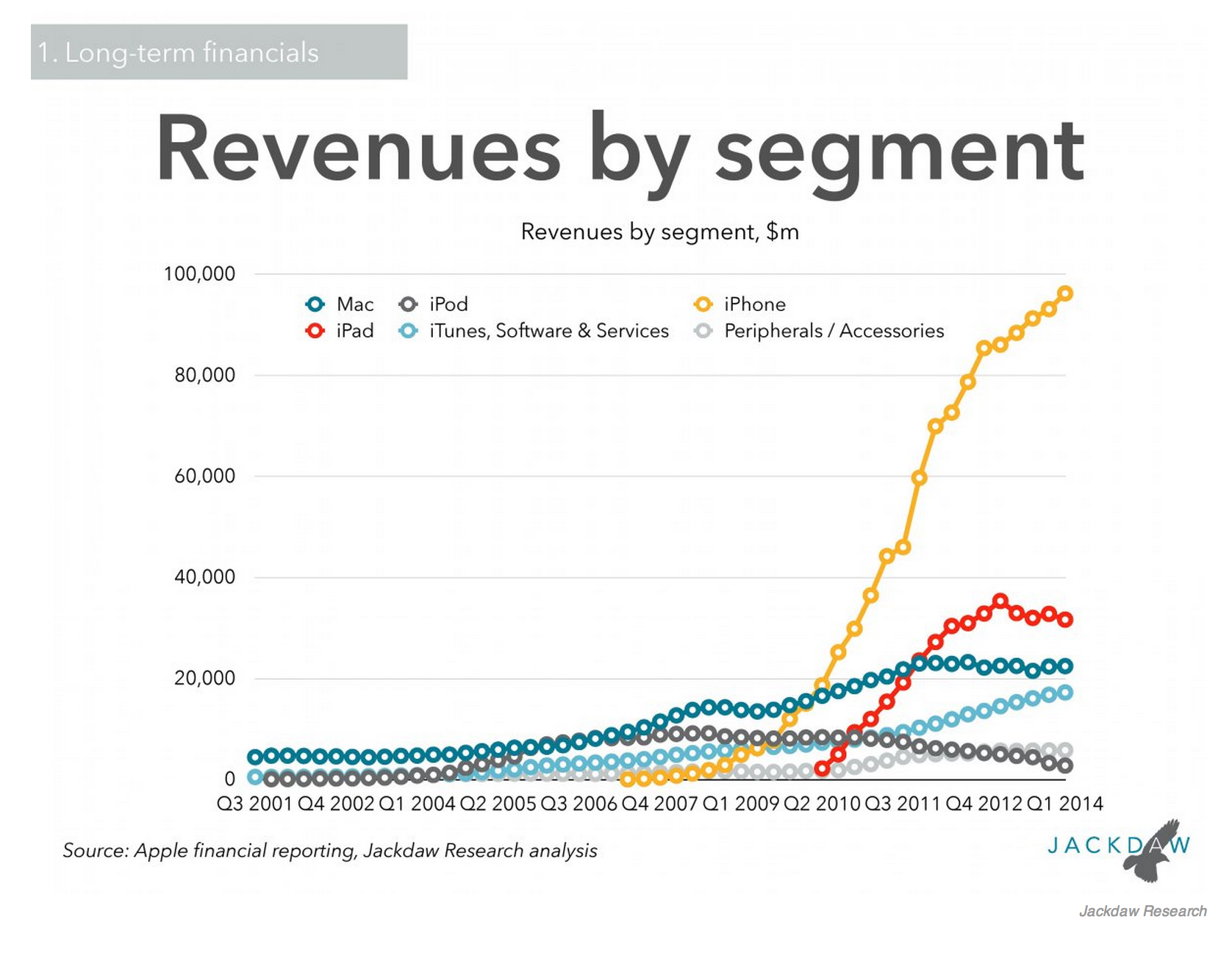 Look at that iPhone line compared to the iPad line! It's incredible — and the recent trend is incredibly surprising. Look at the early slopes: the iPad started off by growing just as fast as the iPhone, and it managed to completely disrupt the traditional laptop industry. Microsoft is still scrambling to catch up. But now iPad sales have plateaued. Why?

The iPad is getting squeezed on both sides

When Steve Jobs introduced the first iPad, he promised that it would better than phones and laptops at various things like browsing and email and watching videos. It was a good pitch in 2010 when the iPhone had a 3.5-inch screen, but in 2014 the argument needs some work. Being good at a bunch of consumer things like browsing and email is fine, but newer phones with big screens might be even better for those things, since they're with you all the time. And being better at watching videos and playing games than laptops is fine, but laptops are much, much better at actually doing work. Bigger phones are starting to disrupt the low-end uses of the iPad, and the iPad isn't flexible or powerful enough to continue disrupting the higher-end uses of laptops. Apple's tablet is getting squeezed on both sides.

The Wall Street Journal put it succinctly in its report on Apple's earnings:

One challenge for tablet computers, in general, is that they aren't quite as portable as smartphones but also aren't as useful as computers when it comes to doing office work.

When I reviewed the iPad Air last year, I proposed the College Freshman Test: if you were a college freshman, would you feel comfortable taking only an iPad to school instead of a MacBook Air? The answer right now appears to be no — and Apple seems to know it. The company just announced a major partnership with IBM to develop apps and services designed to push the iPad into big enterprise environments, and the company just aired a terrific new ad for MacBooks — the first MacBook ad in years.

And of course, none of this is to say anything about Android tablets, almost all of which have been dismal flops. Android phones generally have huge screens to begin with, and Android tablet apps are decidedly mediocre bunch, so they're just not worth it. The only potential success is Amazon's Kindle Fire, which is inexpensive and comes with a huge content library, but Amazon won't release sales numbers for it, so it's impossible to know.

The biggest knock against the iPad when it launched was that it was "just a big iPhone." With bigger iPhones just a few months away, it appears that Apple's best move might be to turn the iPad into a smaller MacBook.