The most delicious part of today's Obamacare rulings

Share All sharing options for: The most delicious part of today's Obamacare rulings

The Fourth Circuit Court of Appeals ruling in favor of Obamacare's tax credits got a lot of attention, largely because it came out just hours after the D.C. Circuit Court issued its ruling against the insurance subsidies.

But there's also a particular section of the ruling that's getting a lot of attention: let's call it the pizza doctrine. This is where the judge uses the case of accidentally receiving a pizza from Domino's after one had requested a pizza from Pizza Hut as an analogy of what is happening with the billions of Obamacare tax subsidies. Here's the key section of the PDF: 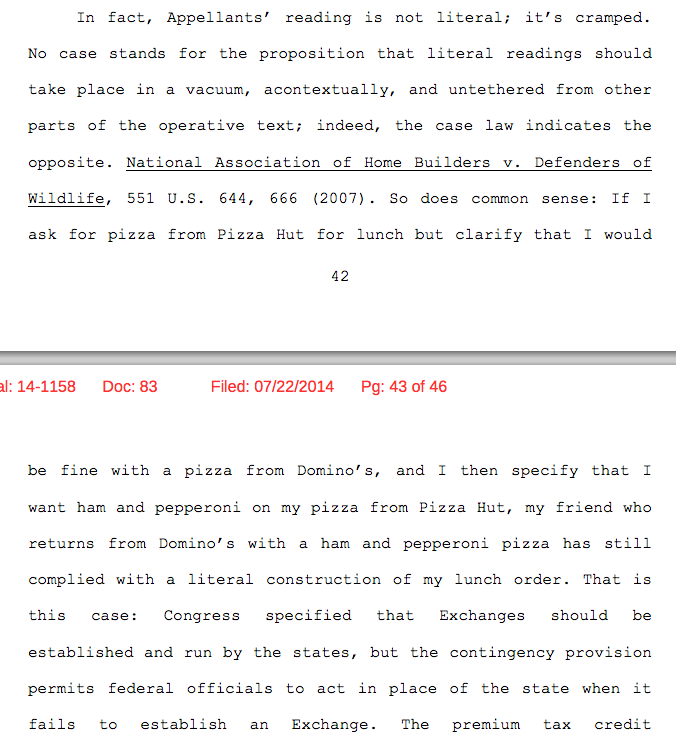 This, of course, is not the first time that food analogies have played a large role in Obamacare rulings. Who can forget, after all, the seminal role of broccoli in the Supreme Court ruling on the individual mandate?

Move over, broccoli. You've got some new (and arguably more delicious) analogy competition in town.