No, the Halbig case isn't going to destroy Obamacare

Share All sharing options for: No, the Halbig case isn't going to destroy Obamacare

The Halbig case could destroy Obamacare. But it won't. The Supreme Court simply isn't going to rip insurance from tens of millions of people in order to teach Congress a lesson about grammar.

As Adrianna McIntyre explains, the Halbig case holds that Obamacare's subsidies are illegal in the 36 states where the federal government runs (or partly runs) the exchange. The plaintiffs rely on an unclearly worded sentence in the law to argue that Congress never intended to provide subsidies in federally-run exchanges and so the subsidies that are currently being provided in those 36 states are illegal and need to stop immediately.

This is plainly ridiculous. The point of Obamacare is to subsidize insurance for those who can't afford it. The point of the federal exchanges is to make sure the law works even in states that can't or won't set up an exchange.

For Congress to write a law that provides for federal exchanges but doesn't permit money to flow through them would have been like Congress writing a transportation law that builds federal highways but doesn't allow cars, bikes or buses to travel on them.

That was...not what Congress thought it was doing. As Jonathan Cohn writes, "not once in the 16 months I reported on the formal congressional debate did any of the law's architects suggest they were thinking along these lines." My experience was precisely the same: architects of the bill underestimated how many states would let the federal government run their exchanges, but they always thought there would be a few, and they always assumed those exchanges would feature subsidies. Everyone in Congress — including the Congressional Budget Office in its estimates of Obamacare's cost — assumed subsidies would flow through federal exchanges.

The bill's authors have said as much in public. Obamacare wasn't written by Barack Obama. Its primary author was (former) Senator Max Baucus. Back in July 2012, his then-spokesman, Sean Neary, told Sarah Kliff that "the clear intention of the health-care law is to provide consumers with tax credits to purchase quality, affordable health coverage through either a state or a federally-facilitated exchange." 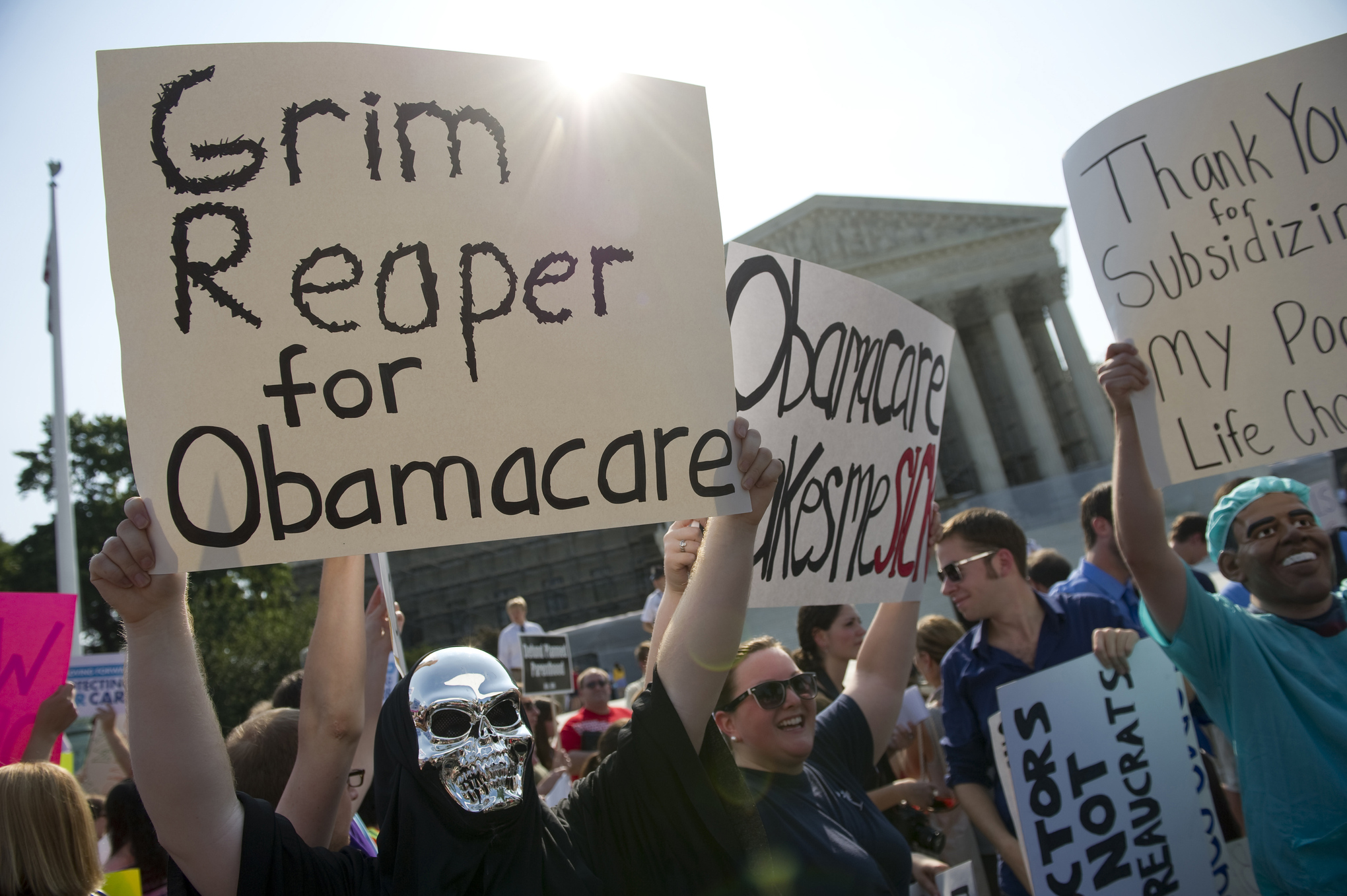 But the conservative lawyers and health-policy experts behind the case — shout out to Michael Cannon and Jonathan Adler, who have worked tirelessly and ingeniously to make Halbig happen — are right about one thing: whatever Congress's intention, the key sentence in the law was drafted poorly. Section 1401 of the law says that subsidies will be extended to people who buy an insurance "through an exchange established by the state." That seems to say that subsidies only run through state exchanges.

whatever Congress's intention, the key sentence in the law was drafted poorly

The government's argument is that Section 1321, which sets up federal exchanges, says that when states fail to construct an exchange the federal government shall "establish and operate such Exchange within the State and the Secretary shall take such actions as are
necessary to implement such other requirements.."

The key word there is "such": the Obama administration holds that the clear intent of that line was that a federal exchange counts as a state exchange for the purposes of the law. That may be a bit confusing — but given the context of everything else in the law, it's clear enough.

The Halbig argument has been rejected by district courts already. But today, a three-judge panel on the D.C. Circuit Court ruled for Halbig (full decision here). The decision broke, as these decisions often do, on party lines: the two Republican-appointed judges ruled against the administration and the judge appointed by Democrats ruled for the administration. That decision is expected to be reversed when the Obama administration asks for an en banc hearing, in which the full D.C. Circuit Court hears the case: most of the judges are Democratic appointees.But that probably won't happen until the fall. In the meantime the law will continue on as normal.

Halbig straightforward case of conservative judicial activism. It'll be curious see whether any commentators who opposed ACA acknowledge it.

Meanwhile, within hours of the Halbig decision, the Fourth Circuit Court of Appeals issued an opposing decision supporting the legality of Obamacare's insurance subsidies, and making the point that the tax credits are crucial to making the health care law work.

"It is...clear that widely available tax credits are essential to fulfilling the Act's primary goals and that Congress was aware of their importance when drafting the bill," the Fourth Circuit Court ruled.

For Halbig to unwind Obamacare the Supreme Court would ultimately have to rule in the plaintiff's favor. And they're not going to do that. By the time SCOTUS even could rule on Halbig the law will have been in place for years. The Court simply isn't going to rip insurance from tens of millions of people due to an uncharitable interpretation of congressional grammar.

For five unelected, Republican-appointed judges to cause that much disruption and pain would put the Court at the center of national politics in 2015 and beyond. It would be a disaster for the institution. Imagine when the first articles come out recounting the story of someone who lost their insurance due to the SCOTUS ruling and then died because they couldn't afford their diabetes or cancer treatment. Imagine when every single Democrat who had any hand at all in authoring the law says the Court is completely wrong about what the law meant. Imagine when every single Democrat runs against the Court.

Chief Justice John Roberts realized that in 2012 when he ruled the individual mandate constitutional. All evidence suggests he didn't want to rule the mandate constitutional. But he thought it would harm the Court to do otherwise. Deciding for the plaintiffs in Halbig would do far more damage to the law than striking down the mandate and it would do so when the law is actually providing insurance to people. It's not going to happen.