Share All sharing options for: Most of this year's increase in unaccompanied child migrants is kids under 13

The official government term for people under 18 apprehended crossing the border without a parent is unaccompanied alien children, but that's slightly misleading: most of them are teenagers. (This has helped feed border hawks' frustration over the way the issue is being addressed, as some feel teenagers from Central America could be gang members themselves.)

But new government data, analyzed by the Pew Research Center, shows something striking: the increase in unaccompanied minors over the last year is driven largely by children under the age of 13.

Pew's analysis compares statistics from all of fiscal year 2013 to the first eight months of fiscal year 2014, so it's not exactly an apples-to-apples comparison. And since the number of kids crossing the border has dropped sharply in July, it's hard to say how many kids will end up crossing this fiscal year. But just for the sake of comparison, here's what the Pew data looks like when it's extrapolated out to a full fiscal year: 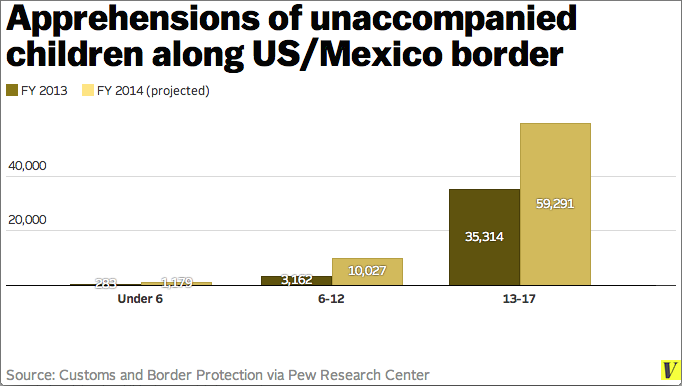 The number of teens crossing the border without adults is certainly higher than it was last year — if trends from May hold, teen apprehensions will be up 67 percent since 2013. But the number of children, particularly children 6 to 12, has increased much more rapidly.

If trends from May hold, apprehensions of children under 13 will be up 225 percent — i.e. more than triple the number of kids who were apprehended in 2013.

This helps us get clearer answers to three key questions:

While the number of children coming to the US from Central America has been increasing for a few years, it's doubled in the last year alone. That means there are really two questions: why more children have been coming recently than in the past, and why so many more are coming now than last year. The answer to the second question — about the increase from last year — is likely that smuggling networks have gotten more sophisticated. The new data reinforces this: the children coming now are much less likely to have come without help than children who came in the past few years.

Are these children gang members?

Why are we only noticing now?

The long-term housing and legal system for unaccompanied migrant children has been under strain for a few years, but the crisis only came to public attention this spring. It would make sense that the government would have been able to come up with workarounds and stopgap measures to handle several thousand more teenagers than they had capacity for. But Border Patrol and other officials might have been simply overwhelmed by the need to care for thousands more young children than they could handle. And while stories of unaccompanied teenagers might not have caught the attention of reporters, or of federal officials, maybe stories of children crossing the border without their parents were more compelling.